I meant to include some goals for February when I posted my January summary, but that didn't happen. As usual, I was trying to throw the post together at the last minute and so I forgot. Then Husband got home from Japan and I forgot again.

Better late than never though, and I'm keeping it brief:

In November I experimented with cutting out wheat & dairy; my eczema cleared up and I actually lost a few pounds. Then while Husband and I were on vacation at the end of December I dove headfirst back into yummy cheese and baked goods. I've been trying to cut it out again now though, and trying to figure out exactly what I can and can't have. Which is what I want to track - it's not about counting calories right now.

Exercise, I just plan to keep on keeping on. My shoulder is feeling way better than it was in November, which is  great. Taking it easy with the strength training, making sure I stretch well, still enjoying Zumba classes when I can get to them.

Husband was home for week, and he had to leave again yesterday. :(

Yesterday started out warm and raining, then shortly before noon turned to snow which continued into the evening. 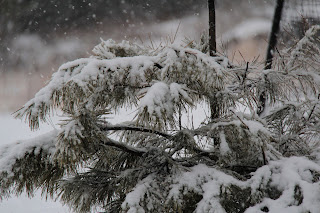 Frank seemed pretty convinced that he wanted to go out for a walk in the afternoon, but we didn't even make it down the driveway. It was actually warm (relatively speaking) but the snow was coming down pretty thick. 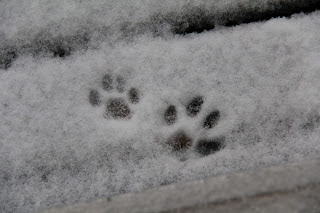 That's okay. There was fun to be had indoors. 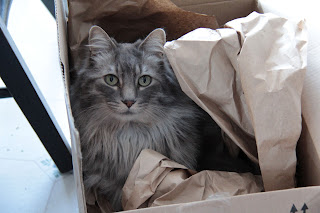 I went out for groceries yesterday before the snow started. On a whim, I picked up a bunch of kale and finally got around to trying kale chips. Sadly, I can't show them to you... 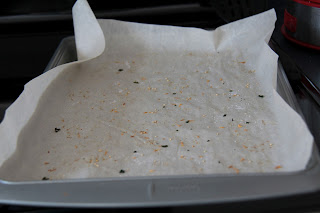 I stood at the stove to taste them and see how they turned out and before I knew it half the pan was gone. The rest disappeared within the hour. Looking forward to more of those.

And tonight I made fish tacos. I've never had fish tacos anywhere, no idea how they are usually made, but I had haddock that I managed to perfectly pan fry, I had corn tortillas and guacamole. It was pretty awesome. I will be doing that again also.

If I keep this up, I will have all kinds of interesting new things to feed Husband when he gets home.
Posted by JavaChick at 10:00 PM 4 comments: