I did indeed finish my last week of Chalene Extreme on time. I really wanted to get in that last workout by the end of October because on Nov 1 we were going away for 5 days, and I just didn't want that one last workout hanging over my head.

I scheduled those workouts, and did them on the day that was scheduled, and I finish the final one on Sunday, Oct. 30.

The weekend was busy with trying to get ready for our trip - last minute errands, laundry, getting things ready for the cat sitters.

Monday, Oct 31 I got up earlier than I wanted, because Zappa seemed to think I should get up and feed him. It was good though, had things to do. Had a good morning; a little relaxation, working on getting packed, tried a new yoga workout, had cuddles with Zappa. After Zappa had his cuddles with me, he went over and jumped up on Husband's chair for cuddles from him. I remember thinking: What am I going to do when I lose him? And then a couple of hours later, he was gone.The vet thinks his heart just stopped.

And then we still had to get up early the next morning to catch the ferry. I didn't want to go, but Husband had an appointment in Halifax, and our families were expecting us for a visit. After the first day, it was maybe a bit easier being away; we were busy and distracted, and in a different place where I wasn't expecting to see Zappa.

Heading home was hard. I was bracing myself for it, and trying not to be too upset, because I know that's hard on Husband. I think I maybe bottled it up too tightly, and ended up feeling a bit remote at first, in a little bit of a daze. I was sad but it was like I didn't quite know what to do, or how to process it. It's starting to hit me now though.

You know how sometimes people say "Hi, how are you?" and you just automatically respond that you're good,  you're fine, you're okay....At least I do that a lot.

Yesterday at work a coworker actually asked "are you okay?" I thought I was doing keeping it together more or less, but the way she asked that question makes me think not. And what came out of my mouth was: "not really."
This morning I got really irritated with Husband over nothing, and then tears just started running down my face and I realized I'm not really okay right now. Turns out it's a relief to acknowledge that, even just to yourself.

I will be okay, eventually. But right now? I'm hurting and just trying to keep myself distracted as much as possible.

I haven't really been taking pictures lately. Not sure why exactly. I've been grieving Frank and I haven't had the heart for a lot of things, I think. And Zappa has always been a little harder to photograph; as soon as he knew you were looking at him, he'd come running, looking for attention. Most of the recent ones I do have are from my phone. 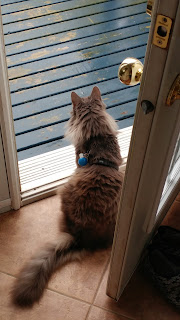 October 22
Wishing for the rain to stop so he could go out and chase mice. 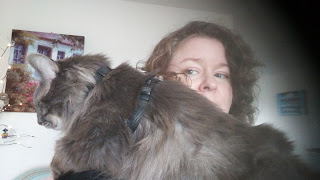 October 29
Not really a good photo - I have not mastered the art of the selfie - but this was his favourite thing: to be picked up and carried around, resting on the left shoulder. I would stand/walk around the house until he was ready to get down, which could take a while. But he purred and snuggled and was happy as could be. 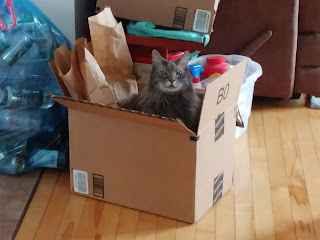 October 29
I bought a new cat fountain, had not set it up yet; was planning to do it the next time the old one needed to be cleaned. Cory and I had watched Zappa checking out the box before I opened it and chuckled about how fast he'd be in there once I opened it. Sure enough, I unpacked the new fountain on Saturday and the next thing I know he's in the new box looking really pleased with himself.

He had 14 good years. I know that his last days were happy. If it was going to happen, I'm glad it happened when we were there rather than a day later when he would have been all alone.
But I miss him and I am not okay.
Posted by JavaChick at 9:51 PM 2 comments: