I had hoped to keep up with weekly posting, but oops! So here's how the rest of September went down...

If you've been following along at home (Hellooooo! Anyone out there? No worries, I don't mind talking to myself...), you'll know that PIYO Core and I did not get along. Specifically, the side planks and roll ups. Core work does tend to be my least favourite thing to do, so even though I know it's important, it tends to be the first thing I skip. While I feel that PiYo has been doing good things for me, I feel like I need to do some other Core workouts to hopefully get to the point where the PiYo Core workout does not seem like an exercise in frustration.

To that end, I have decided to dig out some of my old school Pilates DVDs, work them into the PiYo Schedule, and see what that does for me. If it feels like that's not working for me, I'll...try to figure out something. :)

So this is how I've started out: 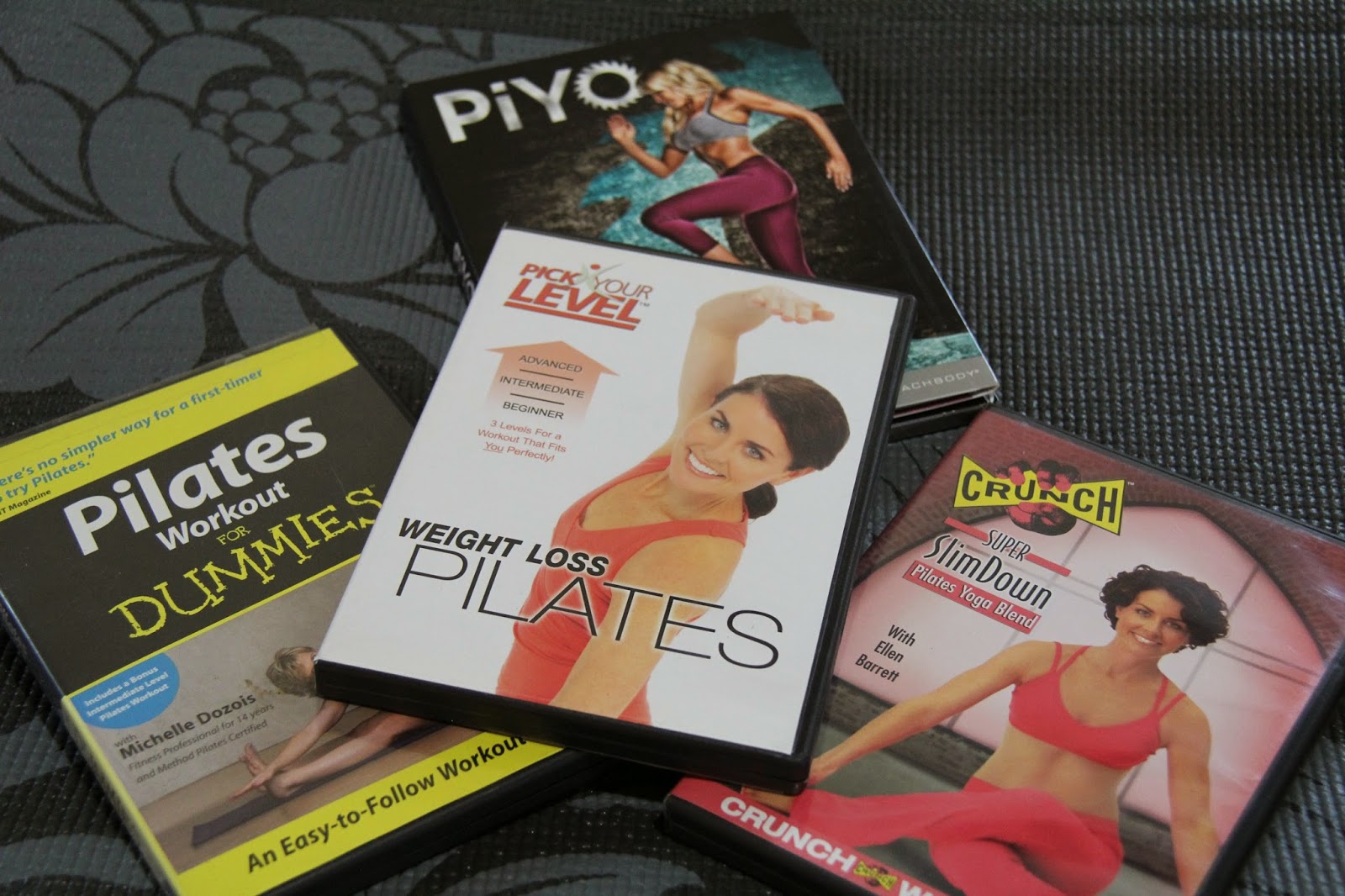 Pick Your Level Pilates - with Ellen Barrett.  I love Ellen Barret workouts. She makes me feel tall and graceful, adjectives which are not in any way descriptive of my 5' awkward self. This DVD has 3 levels - beginner, intermediate and advance. As you do the workout, you can pick any of those levels for each move. I normally do all intermediate (except for roll ups...always beginner with the  roll ups), but after PiYo I decided to give the advanced a try, and most of it is doable (you know, except for the roll ups). Not sure if it is due to increased ability, or just lack of confidence in the past...Possibly a bit of both.

Pilates for Dummies - Was my very first foray into Pilates. Definitely identified some areas where I need to work on flexibility, but not as hard as I expected. Also, kind of boring; now I remember why I stopped doing this one.

Crunch Super SlimDown Pilates Yoga Blend - another old favourite from Ellen Barrett, which I had not done in a long time. This is a longer workout; again, I would say not as difficult as I remember from the last time, but definitely some challenging moves in this  one.

Week 1 - starting from Sept 8 - I skipped the intro workout this time, replacing it with a Pilates DVD. I doubled up on the Define workouts, doing both Lower & Upper in one session, and throwing in Pilates DVDs on the other days.

Week 2 - I was actually noticing a bit of strain in my hands & wrists, so decided to back off a bit and go back to splitting up the Define workouts for this week.

Week 3 - Was just one of those weeks. Things kept coming up. I did one workout. I was still in a good frame of mind though, because I feel like I'm back on my game. A bad week is not going to derail me; I will just start over the next week...

Then Sunday night, going down the stairs I somehow missed the last step, or possibly 2 steps...all I know is I ended up on the floor at the bottom and, along with a few scrapes and bruises, I've hurt my foot and I'm hobbling around. So there will be a short break in the workout schedule.

Could have been worse, no serious damage done, just trying to stay off my feet for now and let things heal.

The weather was seriously beautiful last weekend. I spent some time sitting out in the yard with a book, which is something I did not do enough of this summer. It's been a bit of a weird summer, actually, and I'm not even sure how to explain why. It was definitely not a good year for my garden, just finally getting some tomatoes now, and not many of them. Peppers are just starting, I doubt they will get a chance to mature. I got a late start, for sure, but it also seemed like things were just really slow.


Hopefully we can still look forward to some good weather, though it yesterday cooled off considerably. 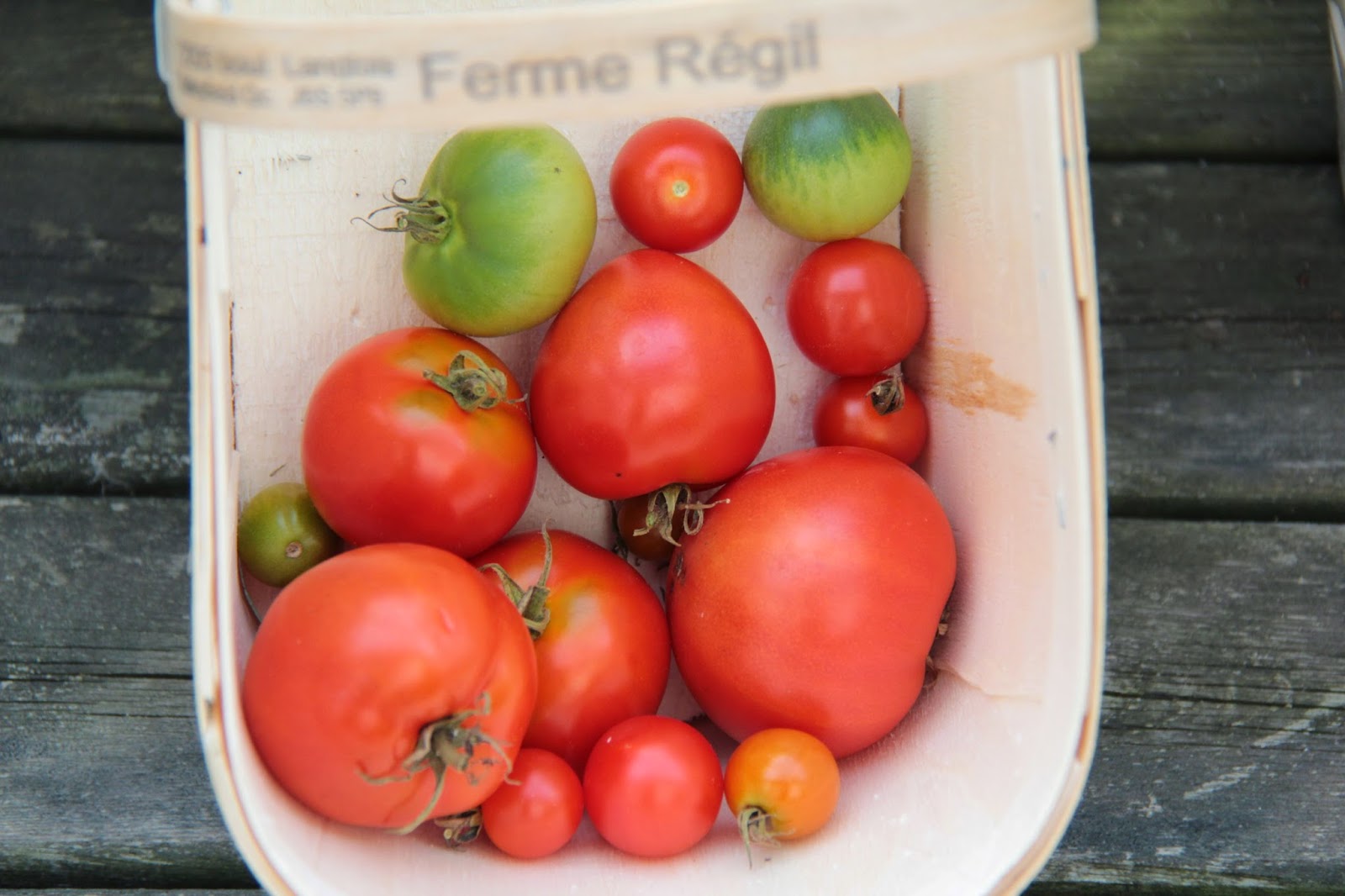 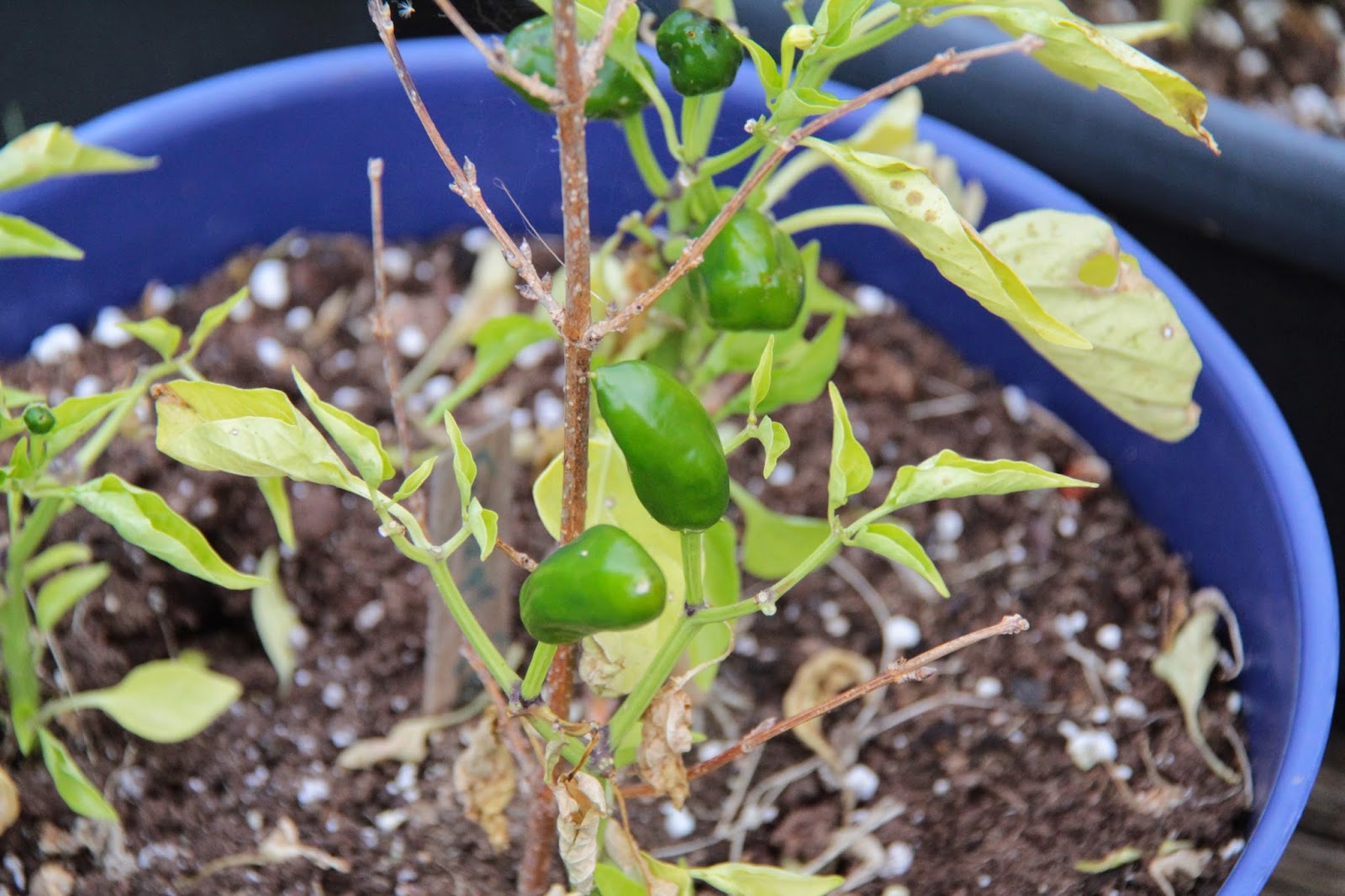 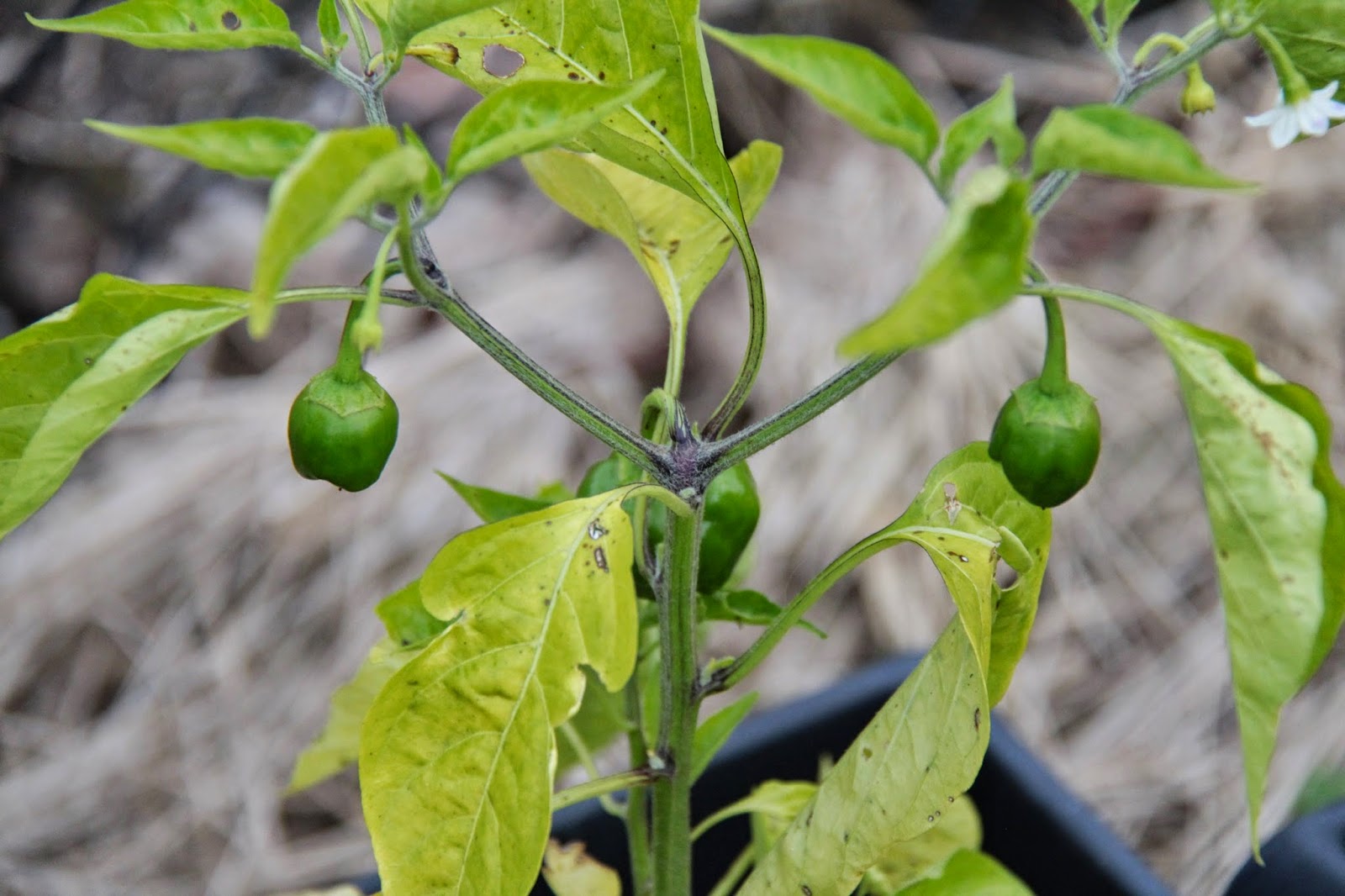 The good news is that week 8 was a complete turnaround from week 7; I had my energy back, and I was back to loving PiYo. Honestly, I was feeling so disappointed during week 7 because I went from feeling pretty great about the workouts to not wanting to do them at all. Maybe I should have given myself a few days off, but I was so focused on the fact that I was two weeks away from finishing the schedule.

From Tuesday on I was back to feeling good. I was marking off workouts, counting down to the last one where I could say: I did it!

I had to work Sunday morning. It only happens every few months, and most of the time - not every time, but usually - we're done by late morning/early afternoon.

But of course this Sunday there were delays starting, so we had to wait around. It was somewhere around noon when we finally got started, and then it was around 5 pm when we finished. I was tired and cranky, I had other things to do, and I didn't want to go back to that place where I was begrudging the workout...Of course the last one would be Drench too, which is the longest workout on the schedule. So I decided I would do it on Monday.

Monday, of all days, we were late leaving work.

I could have done it today, but I kind of feel like the moment has passed. This week was already planned out in my mind. So I'm skipping it.

Technically, that means I've missed two workouts, because I missed one a  couple of weeks ago as well. And, it took me 9 weeks, because I was sick in the middle. So you can call that a fail if you want. I actually am okay with it. It's the consistency that is important, in my mind anyway. It's not like there were 8 weeks and then it's done forever, I actually am rolling right back into another round of PiYo, though I will be doing a bit of a hybrid this time around, at least to start; we'll see how it goes.

So somewhat of an anticlimactic end to my PiYo Challenge, but there it is.

As for the results - I do feel like I have increased my strength and flexibility. In the beginning, I was often getting muscle cramps in my foot, and/or my hip when doing the workouts - those have all but disappeard. I have lost a few pounds. I haven't done measurements yet, but I doubt there is a huge difference (to be fair, my eating was not very consistent, as usual). I do think I can see a slight difference in my upper arms, but probably no one else would notice.

That may not sound like a ringing endorsement, but for me it was a success because I wanted to do the workouts, I stuck with the program for 8 weeks, and I enjoyed most of it. I feel proud of what I was able to do, and that I was able to improve. I want to do more and get even stronger. I definitely feel a bit of a confidence boost. All that, to me, adds up to success.

I forgot to post my August workout summary last week - too busy counting down those last workouts...Better late than never!The gap right at the beginning is where I got sick at the end of week 4.

I guess it's more like Week 7.25, since I'm two workouts into the last week already.  It's the home stretch!

I gotta tell you, last week was not so good. I'd had company the weekend before - which I looked forward to, and sincerely enjoyed - but I was exhausted by the time they left on Sunday. It is just a lot busier than I am used to when we have people to stay. Normally, I can go at my own pace, have some quiet time to myself (Introvert, party of one!) but that doesn't work when we have house guests. I don't mean that to sound like complaining, it's just a fact of my life.

Anyway, I pushed myself to do my scheduled workout on Sunday and Monday, but was still exhausted on Tuesday. And when I say exhausted, I mean dragging myself around, aware of a physical urge to curl myself up in a little ball somewhere. So I gave in and took Tuesday off, and did feel a bit better.

It was still hard to finish out the week, and I gotta say I was really cranky about doing Drench yesterday. Up til now, PiYo has mostly been easy. I haven't had to talk myself into my workout most days. I like some of the workouts better than others, but overall it's been a program that I enjoy. Last week was like the flip of a switch and I just didn't want to do it, I begrudged the workouts, and I didn't enjoy it.

Maybe I should have taken some time off, but I am so close to the end now! I'm in that mind set where I have a schedule and I must follow the schedule. That does tend to get to me eventually - I must do, rather than I want to do.

Today was Buns, which is my favourite, and I did actually enjoy that, so hopefully I am getting my groove back. Four more to go!

This weekend I took it pretty easy. Saturday I sat in my chair and read a novel (Visions by Kelley Armstrong). Then Saturday evening watched The Escape Artist, that I've had sitting on my PVR for a while now. Sunday & Monday (yay for long weekends!) I watched season 4 of Downton Abbey,which I've also had sitting around for a while too. Lots of couch potato time - I need it now and then.

Over the weekend I also did my first canning of the year - a small batch of dill pickles (with cucumbers I grew in my garden), and salsa (with tomatoes from the farmers market).

It may not sound like a very exciting weekend, but I think it was what I needed.


My breakfast of late. Freestone peaches are in season and I am doing my best to eat my fill, which leads to my perfect breakfast: fresh peach, plain yogurt, a little bit of muesli. Lovely! 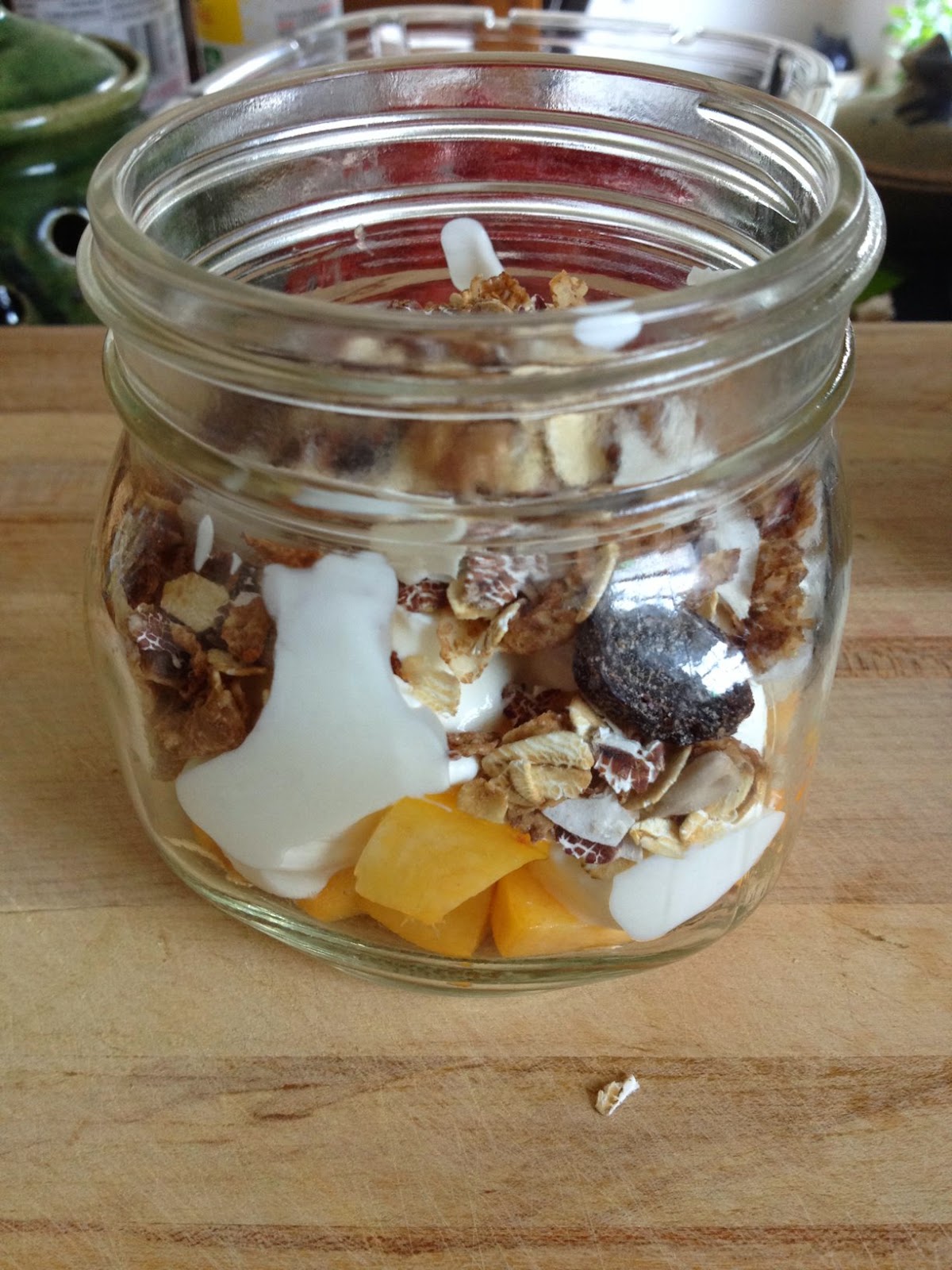 The result of my weekend labour (ha! it was Labour Day weekend!): 5 jars of dill pickles and 5 jars of salsa. 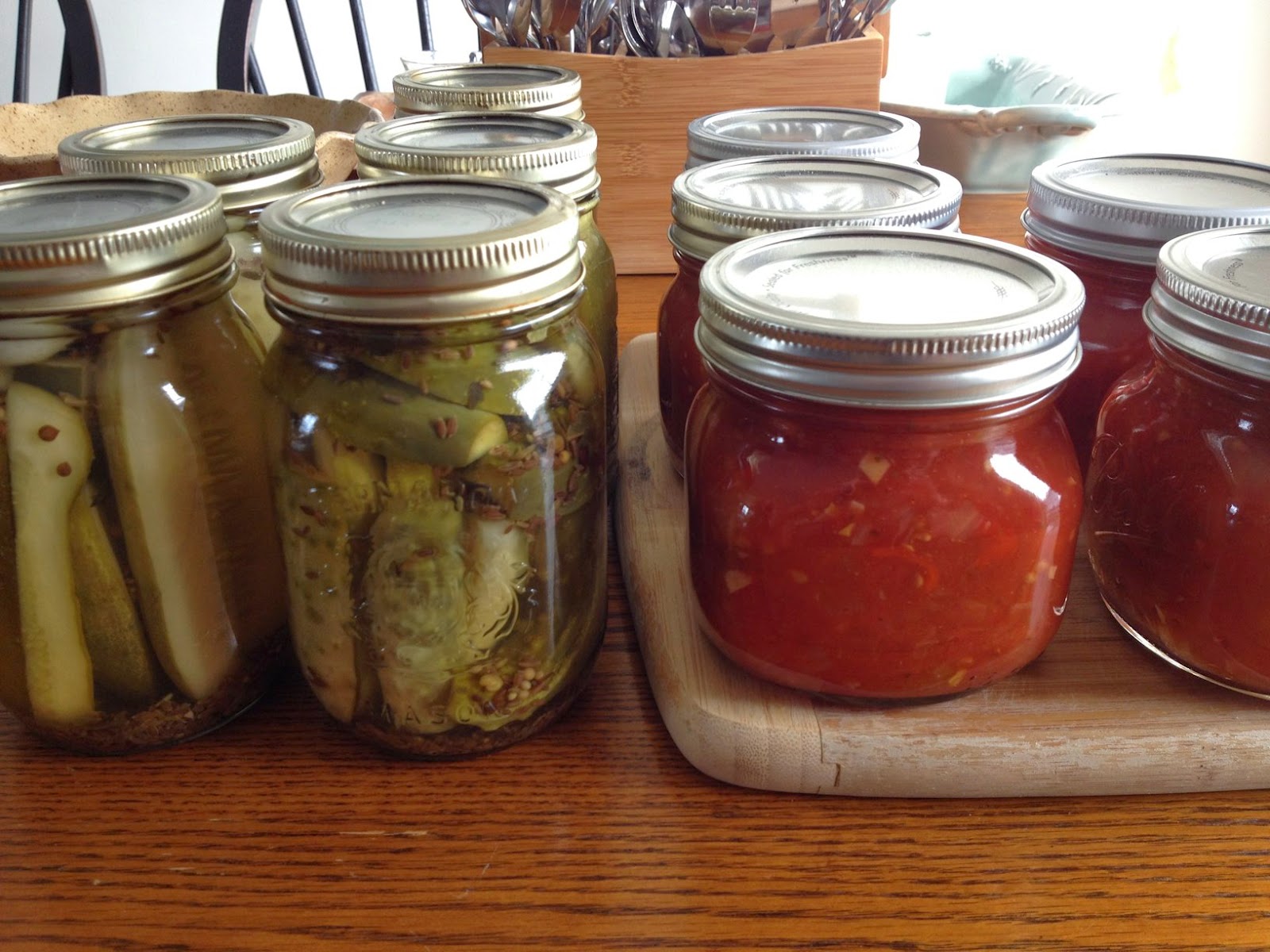 A visitor that dropped by my window at work today. Just because. :) 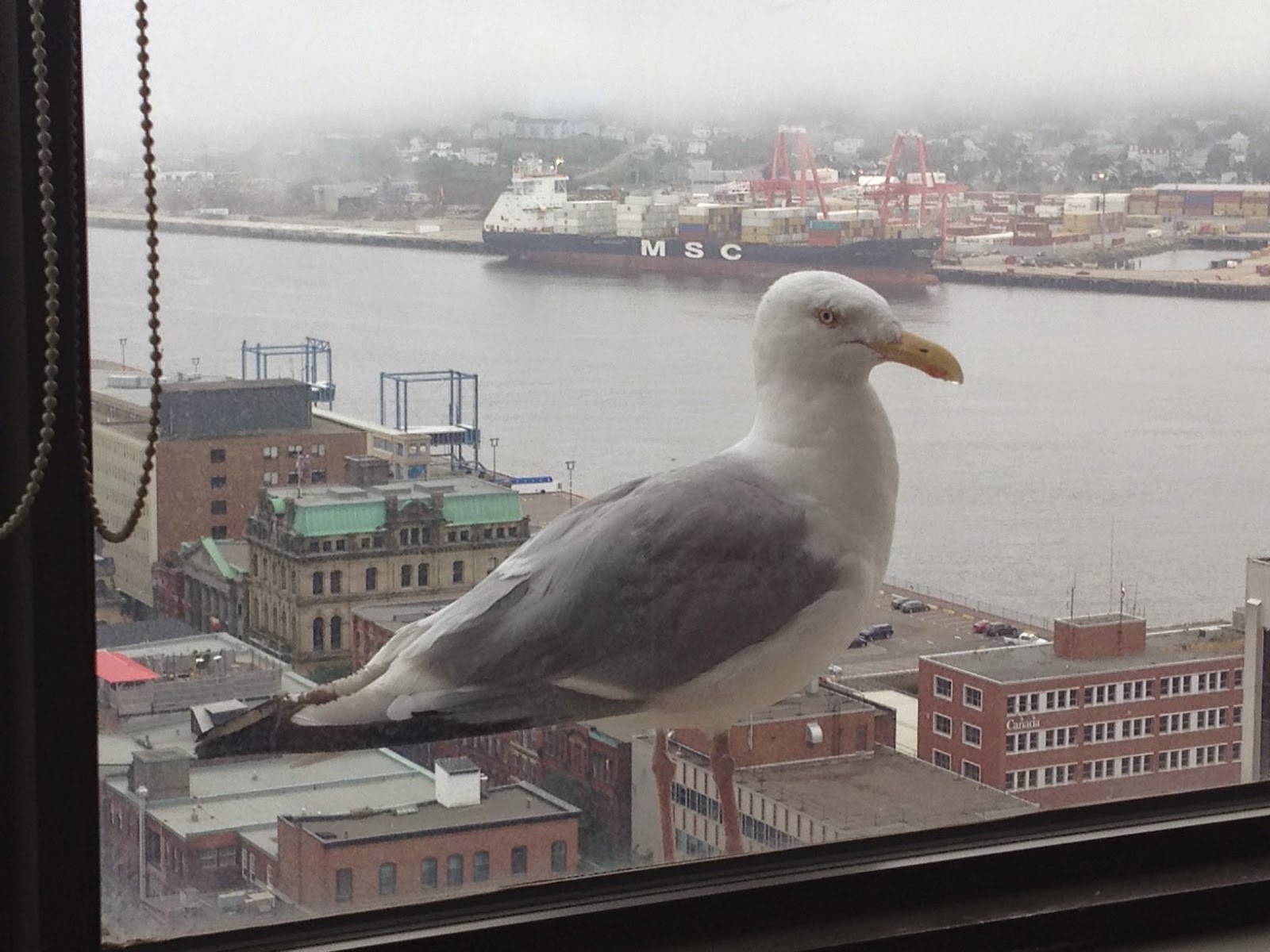 Posted by JavaChick at 8:42 PM No comments: