This week did not go so well.


Results:
1. Only managed a couple of days of writing things down.
2. Had to change my plans on Monday, but still did get in a workout; then only one other workout all week.


What happened:
Monday, I had a meeting so couldn't get to yoga at noon. Then realized that Zumba Monday evening was not going to work either, because I had an appointment to go for blood tests in the morning, and I had to fast for 13 hours; I don't like to eat before Zumba and I wouldn't have much time after. Not a problem, I got in a workout as soon as I got home from work and then had time to eat dinner.

Tuesday was fine. Got up, went to the hospital, did the blood test thing. Went to work. Came home and got in workout #2.

Wednesday woke up feeling kind of crappy. Was still feeling crappy after work, so I gave myself the night off...and then again on Thursday and again on Friday. I wasn't seriously ill or anything, just headache, sore stomach and really tired. Like I said, feeling crappy.

I was hoping to squeak in another workout today, so I'd at least be able to count 3 for the week, but I was busy in the kitchen all day - made a quinoa salad for my lunches this week, butter chicken in the slow cooker and baked a loaf of Rye bread for Husband to have for lunches this week. I also called one of my sisters this afternoon and chatted for quite a while. I'm not a phone person, so I rarely do this, but I noticed she had called me yesterday (I had gone out and forgot my cellphone), so I decided to call back.

So tomorrow is Monday again and I am giving myself a do-over. Basically the same goals: write down my meals/snacks, get in my workouts. That's it. I should be able to do that, right?
Posted by JavaChick at 9:52 PM 4 comments:

I can't believe it's Sunday night already. This weekend really got away from me. We had snow all day yesterday. Then the temperature went up to 7 degrees today and it all melted away. We went out to buy groceries this afternoon and it felt like spring. Supposed to get cold overnight again though. What a schizophrenic winter we are having.

Not everything went according to plan this week, but I was able to adjust and recover fairly well. And let's face it - it's not that uncommon for plans to change, so when you can roll with the punches and adjust, it's a good thing.

My goals for this past week were:

After two weeks of vacation, lazing about the house and sleeping in, I was totally off my sleep schedule and workout routine. Went back to work on Wednesday the 2nd, and it was pretty painful.

This will be the first full week back to work. I'm still not quite back on the proper sleep schedule, I don't think, and I have not done any workouts. It was all I could do to drag myself into the office last week; once I got home I was done.

There are some things that I want to pay attention to diet-wise, and it came to me today that it would be a good idea to post more often. If I can manage to post once a week, it might keep me more focused. So that is my goal for January. Since I just published a post yesterday (this is Sunday pm), I'm not sure when the next will go up, but I figured I'd get this in writing so I can't back out (Like a draft can't be deleted. Ha!).

Sunday, Jan 6, 2013
Feeling more prepared to get back to normal routine (not that I would say no to more vacation, but unfortunately that's not an option). Quinoa salad made for lunches this week. Have dry ingredients mixed together to make a microwave flax muffin for breakfast. New fitness studio schedule has Zumba classes Mon, Wed & Friday evening. The word is, noon time yoga classes will also be Monday & Wednesday; got word on Friday that I will be starting a new project, hoping I can get to the yoga class tomorrow to try it; have yoga outfit set aside to take with me. Leftovers ready for reheated dinner after Zumba tomorrow night. Kitchen is even tidied. A good start to the week.

Friday, Jan 11, 2013
A typical week for me - I start off Monday feeling rested, organized, ready...then as the week goes on I get tired, staying organized seems like too much effort and I'm just doing my best to make it to the weekend. Please tell me I am not the only one who experiences this. 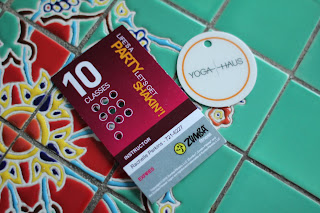 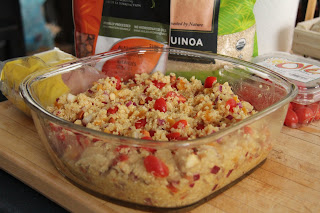 For this week:
The weather really warmed up this week, which we have been thoroughly enjoying. Not just Husband & I either, the cats are finally braving the snowy conditions now that the snow has melted down and compacted enough that they can walk on top of it. It's been a good week for all of us! 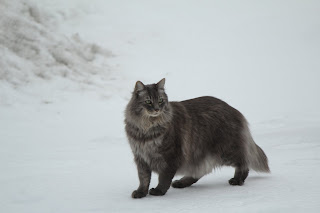 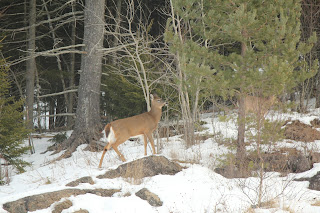 I often feel like the years go by and not much happens, nothing much changes. I'm sort of alright with that because I like my life. But then I run into people and they inquire "What's new?" and I can't think of a thing to say.

Not that much did change this past year, certainly nothing drastic, but some things were certainly out of the ordinary.
Those were the big events. Some of the smaller stuff - while Husband was away, I got to experiment with my diet, going pretty much vegetarian and cutting out wheat & dairy for a while. On his last trip to Japan, Husband experienced a recurrence of an eye condition he had a few years back, so he got to experience a bit of the medical system in Japan and once he got home there were lots of doctor appointments.

It seemed like things had just settled down from that, when our washing machine quit on us and then Husband got sick from a spider bite. Yes indeed, life has been eventful.

Early in December I realized I was missing a piece of jewelery - a square cut emerald ring that Husband bought for me many years ago when he was in Columbia for work. This broke my heart a bit (actually more than a bit, there were tears), I'm still not over it. I walk around the house looking, as if I expect the ring to appear, but it's gone. I don't think there is any point in going into detailed explanation of the series of events. Suffice it to say, this has put a damper on my mood. I know it is just an object, and there are much larger problems out there in the world, but there was a lot of sentimental value there and it hurts.

Moving on, because there is nothing else to be done, we did have an enjoyable holiday season. We both had a couple of weeks off work. Winter actually held off until the evening of my last day of work, and then we had a snow storm. Fortunately, the weather behaved for our trip home to Nova Scotia where we had a wonderful visit with our family there. Then there was another snow storm the day after we returned home, and another on the 30th. Mother Nature packed a whole lot of winter into two weeks.

No big plans for 2013 so far. It seems like Husband may be finished with traveling for a while, which is nice. One of my sisters is coming home for a visit sometime this spring (I miss my sisters!) and it looks like we will be going to Ottawa this summer, though I'm not sure how long of a trip it will be.

I don't really do New Year's Resolutions, but at the same time I have felt over the last few months that I was always waiting for things to settle down so that I could think straight and work on some goals. I was feeling pretty overwhelmed for a while there. So, while I am still somewhat rested from my vacation (I was back to work on the 2nd - that was a bit painful in all honesty), I will try to set out some goals.

Food related:
Fitness related:
Other goals:
I had intended to get a start on some of those housekeeping goals over the holidays. Instead I spent most of my vacation like this: 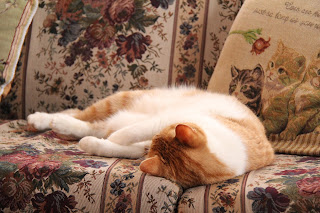 Not me. Obviously. This is my parent's cat. But the general attitude of lazing around? That was me. 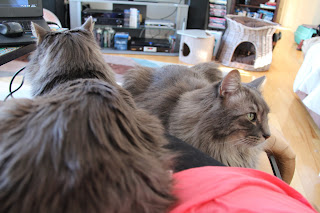 This is me, underneath my clowder of cats. When we returned from our trip to NS, these guys were stuck to me like burrs.


There was lots of snowy weather that made hibernation seem quite natural. 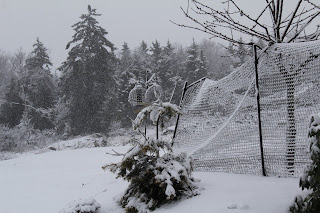 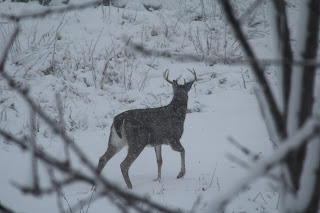 The cats are rather put out by all this snow, Frank especially. They don't want to be out in it  at all, not that I blame them. But it makes them a bit crazy at times. 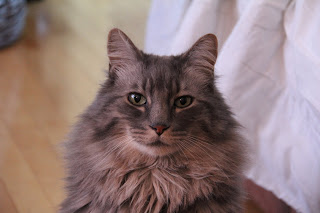 This is Frank's I-want-something-get-up-and-pay-attention-to-me face. Most of the time he doesn't seem to know what he wants though, so I just follow him around the house; usually we end up at the food dish. 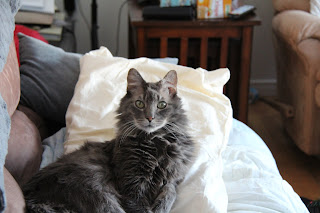 This just made me laugh. I left a blanket and pillow on the love seat, and I come in from the kitchen to see Zappa lounging against the pillow. He looked pretty satisfied with the situation.