Last Sunday in my painting class we were focused on clouds. At the start of class, we all went outside and looked up; we were observing the blue of the sky - which was actually quite bright that day - and the clouds.

Then we went in and worked on painting the shades of blue, and adding clouds. I was painting without actually being able to see the sky, which is probably not the easiest way to go about it, but sometimes I can get very focused on what I am doing and not stop to think about things like, say, getting up and going out for another look or two or more... 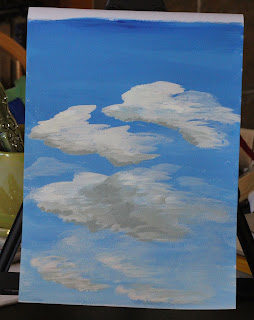 Still, I love the color blue and who doesn't like contemplating fluffy clouds in a blue sky?

Next, we chose pictures from old National Geographic magazines and tried to paint those skies. 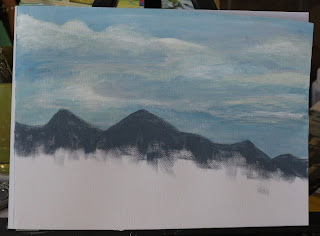 There was more in the picture I was working from - a castle, in fact, I think it may have been Bulgaria? But trying to get that sky took plenty of time. I added the ridge line in at the end, just to give it some sort of definition.

No class this week, because of Easter, but next week will be the last class. I can't believe how fast the weeks have gone by. Despite the fact that it has been so busy, I think I will miss it.

If I had the energy, I would continue by turning the idea of blue skies and clouds into an insightful blog post about ups and downs and silver linings...but I don't really.

The week following my previous post, I did manage to up my game from 0 or 1 to 2 workouts in one week! Then the next week I got 3! but I was kind of exhausted, because busy with all the usual things, plus husband got sick, so I was making him chicken soup and doing all of the chores....And of course the next week I got sick.

I had a cold, which I have gotten over, and I was looking forward to a 3 day weekend to get a bunch of stuff done, and try to jump back into workouts, but I have still not not feeling well. Headaches and a queasy stomach...I can't figure out if it's stress, or what. But it has made me feel like I don't want to do too much.

The weather has been beautiful though, finally. I did get out for some walks, and a couple of yoga sessions - basically things that might help with stress and/or relieve my headache.

I have also been staring at clouds with great fascination since that last painting class, and have spent some time this weekend painting. 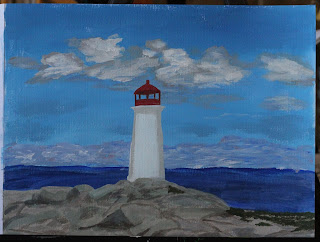 There are details that I left out because a) I started it to work on the sky, and b) I was afraid I would mess it up!

It is far from perfect, but if you look at it from a distance, it is not too bad. I think this is a photo that I will work with as I attempt to improve my skills, and hopefully one day I will have a decent painting.

And still in progress, from an iPhone photo that I took in July 2012; pretty sure husband and I were in a restaurant overlooking the Saint John river. I'm mainly looking at the top part of the photo though, so it's all clouds at this point.: 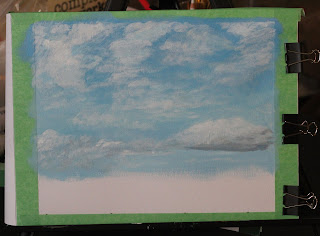 But, it was a nice view: 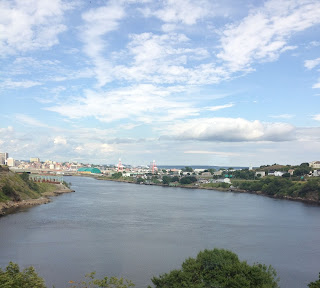 I've got a busy week coming up, and still not feeling great, so at this point I feel like I will just be concentrating on keeping my head above water. And hoping that I start to feel better soon.
Posted by JavaChick at 4:37 PM No comments: