It seems to be a commonly held opinion that 2016 kind of sucked.  A lot of beloved celebrities died. Then there is the fiasco that was the US Election. There were plenty of things in the news this year that made me sad, angry, confused, but more personally? My cats.

Husband and I got married on December 31, 2001. We moved into our house in May/June 2002. We got our kittens in August of 2002. Which means those cats had been with us for almost as long as we have been in this house, almost as long as we have been married.  They were 14 years old. It has been a difficult adjustment, and while I know it's not something that everyone understands, I am still grieving. 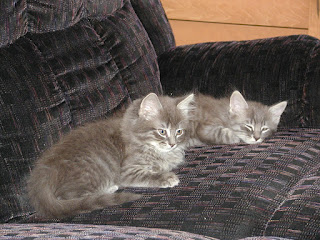 I've been on vacation since Dec.22. We had no plans to go anywhere this year, since we were home at the beginning of November, and again at the beginning of December. Things have been really busy. November was the worst, since Zappa died on Oct 31 and I had  no time to get used to that at all before we had to get up early the next morning and go to Nova Scotia for 5 days. I feel like I have just been stumbling along, trying to get through what I have to get through. It just hasn't been the best time.

So it's been nice. Having this time at home, not having to go anywhere; nothing we have to do. I mostly have not been doing anything that I don't feel like I want to do. I've been reading my way through a stack of books, working on some paintings, playing the piano, staying up late[er than I normally would which is probably still not late to a lot of people], sleeping in. 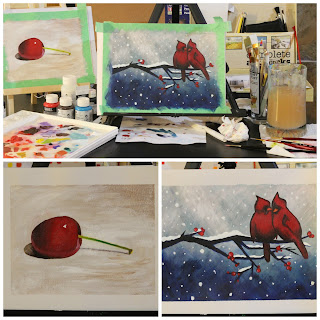 I could wish that the weather was a bit nicer; it's not terrible but a lot of flip-flopping between warm and cold, with precipitation, so it's a sheet of ice out there and I don't want to go out and walk on it. But it's been nice, just hanging out at home with Husband. We've been cooking dinners together that we normally wouldn't make because it would be too much time and effort during a work week. Just generally relaxing, de-stressing, enjoying ourselves. 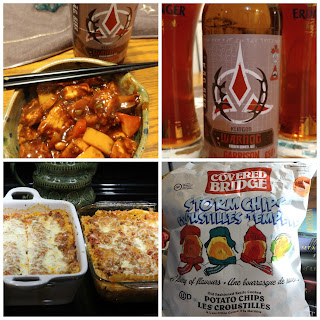 I miss the cats. I still get the feeling, now and then, that I'm forgetting something; I think its an echo of the way I always used to do a mental check; do I know where the cats are? I still look at the doors when I'm walking by, like I'll see a little face sitting there looking in. I still have my moments where I feel so overwhelmingly sad; I think it started happening more after I had a few days at home and I think it's maybe good?

The weirdest thing happened - not sure if it was Saturday or Sunday. I was sitting in the living room on my laptop. My mind had been pretty occupied. I was watching a series of "learn to draw" videos. Then I think I was surfing around maybe, reading some other things? And suddenly I could have sworn that I smelled my cats. If you have cats, you know how they have a scent, if you bury your face in their fur? It's fairly subtle I think. It's pleasant. Anyway, I have no idea where that would have come from, but for a moment it was like it was there. Then I got up and left the room so Husband wouldn't see me burst into tears.

So yeah. Still hard. But good vacation anyway. Still have some time left, though I know it will be over too soon and not seem like it was long enough - vacations never seem long enough, do they?


Reading actual books for a change, instead of the e-reader. 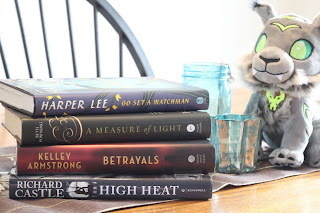 You can't learn to paint without doing some still life paintings, right? Cause everyone needs to know how to paint fruit... 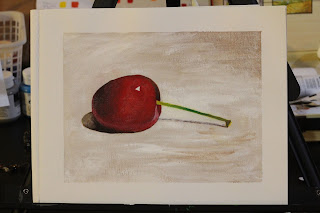 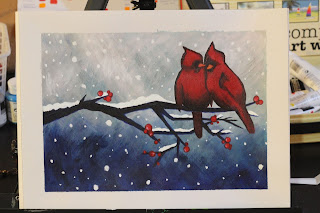 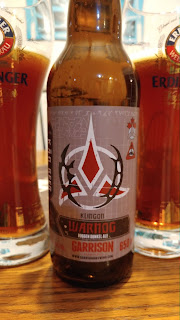 I Dream Of Cats

This morning I dreamed that my cats were here, following me around the house as they always used to do. I went into the bedroom to get ready for work, and Zappa jumped up on the window sill behind me; Frank jumped up on the bed and I was petting him. Surrounded by my happy cats. Then I was on the other side of the bed, by the closet, giving them cat treats. Cory came in and asked what I was doing and I said I was giving them cat treats even though I knew they weren't really there.

I started to wake up then, but I didn't want to and tried not too. But I had to, so I got up and let myself cry in the shower.

I'd  say the dream made me  sad, but I haven't really stopped being sad. It just made it hard to ignore again.

Anyway this afternoon at work, I suddenly remembered pictures that I thought were on my phone and had to stop and look for them.

This was pretty much the normal state for those 2 years or so that Cory was traveling to Japan for work. They were the best feline pals a gal could ask for. Don't know what I would have done without them. 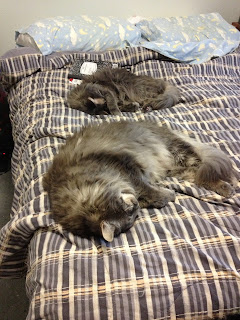 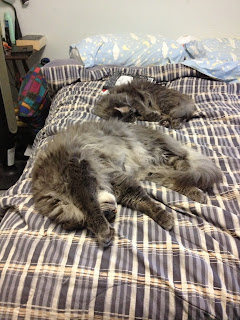 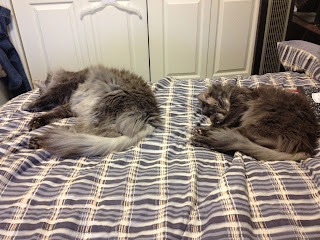 Thanks for visiting my dreams, guys. Wish you were still here.
Posted by JavaChick at 8:58 PM No comments: