"Ish" is getting to be a thing.

I've had the Les Mills DVDs & barbell sitting around for a few months. I'd been eying the package - I admit it, partially because I wanted a barbell of my very own - and when it went on sale, I ordered it, though at the time I was still hobbling around on my bruised-and-possibly-sprained foot.

Finally, I am getting to it. Ish.

Did you catch that "Ish" there?

Week One.
They start you off easy, which is good. I'm just easing back into this workout thing myself.

First off: Pump Basics
This is a short intro, demoing how to use the equipment, explaining how the workouts are structured, etc.

I did this the Friday before, and then did the first actual workout - Pump Challenge - using the bar without any weights. I felt this was a good preview to get me going. I would call Pump Challenge a beginner workout. Most of it was very familiar to me, being exercises that I have done often using dumbbells. The one completely new move would be the Clean and Press - still working on the coordination for that one. In addition to that, I'm finding Squats & Lunges with the barbell held across the back of my shoulders feels awkward, but I am hoping I will get used to it (I keep hearing Chalene's voice in my head, from PiYo, explaining how some things are just physics).

After that, the schedule for the week, with Monday being day one, looked like this:

Monday: Pump Challenge (Did the squat section with just the bar, no weights, everything else with 5 lbs; didn't quite make it through the lunges).

Wednesday: Pump Challenge (Squats with 5 lbs; up to 10 lbs for the middle section - back, deadlifts, chest, triceps; put down the bar completely for the lunges, back to 5 lbs for shoulders).

Thursday: Flow + 45 minute walk (I did not have time for the walk, but I did the Flow, which is a short yoga workout)

Friday: Pump Challenge (Same as Wednesday, except I went back to the 5lb weights for lunges) + 25 minutes walking on the treadmill (toward making up for Thursday).

...And Saturday morning I could barely roll out of bed. My lower back was just completely seized up. Could not bend over for anything. Could barely get up and down from a seated position. I spent the day taking Advil and sitting on a heating pad.

Today was better, but I'm still sore and moving carefully. We went out for groceries this afternoon; we went to Costco and then Superstore, and by halfway through Superstore I was ready to be sitting down.

So, it's looking like I will be taking another break from working out -  hopefully a short one. Oddly enough, the same thing happened to my baby sister not long ago; she went to bed one night feeling perfectly okay, and the next morning could barely move.

It could have been something to do with the workouts, but I honestly have not been pushing myself at all so far. The workouts have been short, I've been sticking to lighter weights, I haven't even been sore. The only different thing I did was to add the walking on Friday. I felt perfectly find when I went to bed. Husband said maybe I did something in my sleep; who knows?

First Impressions of Les Mills Pump (after not quite a full week)
Just thought I would share a few more comments, as these are the kind of things I would like to know if I were googling around the internet, researching a workout program. I won't blame you if you don't read them all...I think this is a hazard of having done so many different workout DVDs over the years...You can't help but rate them and notice all the things you don't like.

That's not exactly a comprehensive review. Basically I've done two different workouts at this point. My instinct is that I will like this program. You know, once I actually get to give it a try.
Posted by JavaChick at 9:31 PM 2 comments:

Wherein JavaChick has a conversation with herself


Say! Whatever happened to that 21 Day Fix thing you had going on?
Oh yeah, that didn't happen.

Monday of week 2, I came home from work with a headache of monster proportions; I curled up in my living room chair and tried not to move too much because it made me dizzy. Tuesday was better, but I was extremely tired. "That's okay," I thought. "I'll just pick up where I left off and do as much as I can." Somehow that didn't quite happen. Vacation was coming up and my attitude was somewhere in the vicinity of IwishIwasonvacationalreadyandIdon'twannadoanything.

I think, when it comes right down to it, I just don't love the 21 Day Fix workouts. They aren't bad workouts, mind you, and they are the type of workout I usually like, but I just didn't look forward to doing them at all. I will give it another try someday.

So how was your much anticipated vacation?
I had two weeks off over the holidays, and enjoyed every minute!

I was sorta lazy - I didn't work out at all - but I was on my feet a lot more than usual, puttering around the house rather than sitting behind a desk. It's nice to pick away at things without time pressure.

Hardly noticed that the new year rolling in...I mean I noticed; the date changed and all that; it just happened without any kind of fanfare. Dec. 31st is our wedding anniversary (Happy 13 years!) and normally we do something fun, but Husband was on call, thus had to work...I was at home, puttering around the house, doing cleaning and sorting...didn't even make a special dinner or anything. It was just a normal day. But that's okay...It has been a happy 13 years. 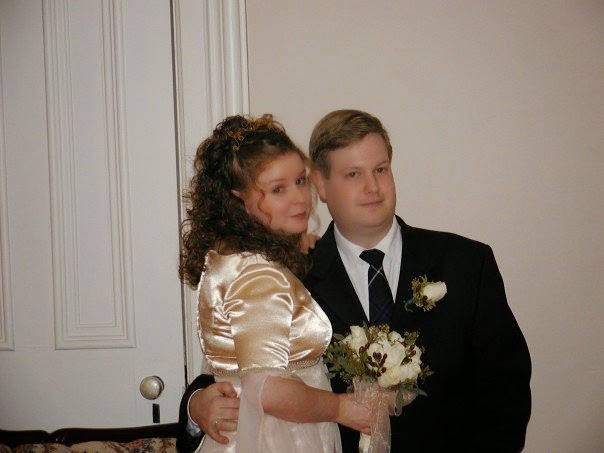 Husband looks so young! I, of course, look exactly the same...*cough cough*


Well what are you going to do now that you are back to the normal work routine? Time to stop being lazy isn't it?
Husband is back on the get healthy kick. He sounds quite serious/determined this time. He's looking at kind of a strict plan, which makes me worried that he will get discouraged. I am currently walking the line between supportively-going-with-it and gently-sharing-advice/opinions...I think some of it you just have to learn on your own from experience though. The good thing about it is he is obviously thinking about it, and we've been having some good conversations (where previously he was more likely to brush off any comments I made). We shall see how it goes.

I am participating in a Facebook challenge group - sort of a January get back on track and change your life thing. I am mainly doing it because I am planning to start a new workout program, and I had good success doing PiYo with a similar group over the summer. My foot is a lot better, though not completely back to normal...Maybe not quite as improved as I had thought; it seems like it has been bothering me more lately, probably from spending more time on my feet over the holidays...But I am hoping I will be okay as long as I am careful.

How is that going then? It's the middle of January already, you know.
Well.  Let's just say I've been doing a lot of mental ranting for the past week.

Week 1. Back to work Jan 5. We started our healthy eating effort - which at this point mostly has me packing lunches & snacks for both of us every day. There were still some leftover treats being finished up at this point, but we were trying to be conscious of moderation.

Workout wise, I am planning to do Les Mills Pump. I was kind of excited. I own a barbell now. I've had dumbbells for years, but now I have a new fitness toy to play with, and I'm hoping the workouts will be fun.

The challenge group does not officially start until next week, but I plan to at least try a few workouts ahead of time...Except when I try to play the DVD I get a disk error. I tried disk 2 with the same result. They work upstairs in our Blu-ray player though, so Husband says we will replace the DVD player downstairs which is old anyway.

Week 2. The challenge group officially started Jan 11. Leftover treats are gone, getting a bit more serious about this clean eating thing. What sounded like a simple, straight-forward solution to my workout woes ended up dragging on until Wednesday evening due to unforeseen technical difficulties.

Wednesday afternoon/evening I could feel another monster headache coming on (I lost my bite plate; I think I'm going to have to get a new one). I had an early-ish deploy on Thursday morning, so I decided to work from home. I was all mentally prepared to jump up from my comfy living room chair at the end of my workday, and try my first Pump workout...And then Husband called and said "we're going out to dinner." Oh well. At this point, what's another day or two?

Next week there will be workouts! You know, if I don't come down with the flu or get hit by a stray asteroid or something.

Anything else?
We had warm weather (relatively speaking) until late in December. Snow finally made an appearance on January 9, and shows every sign of sticking around. It seems that winter is here. 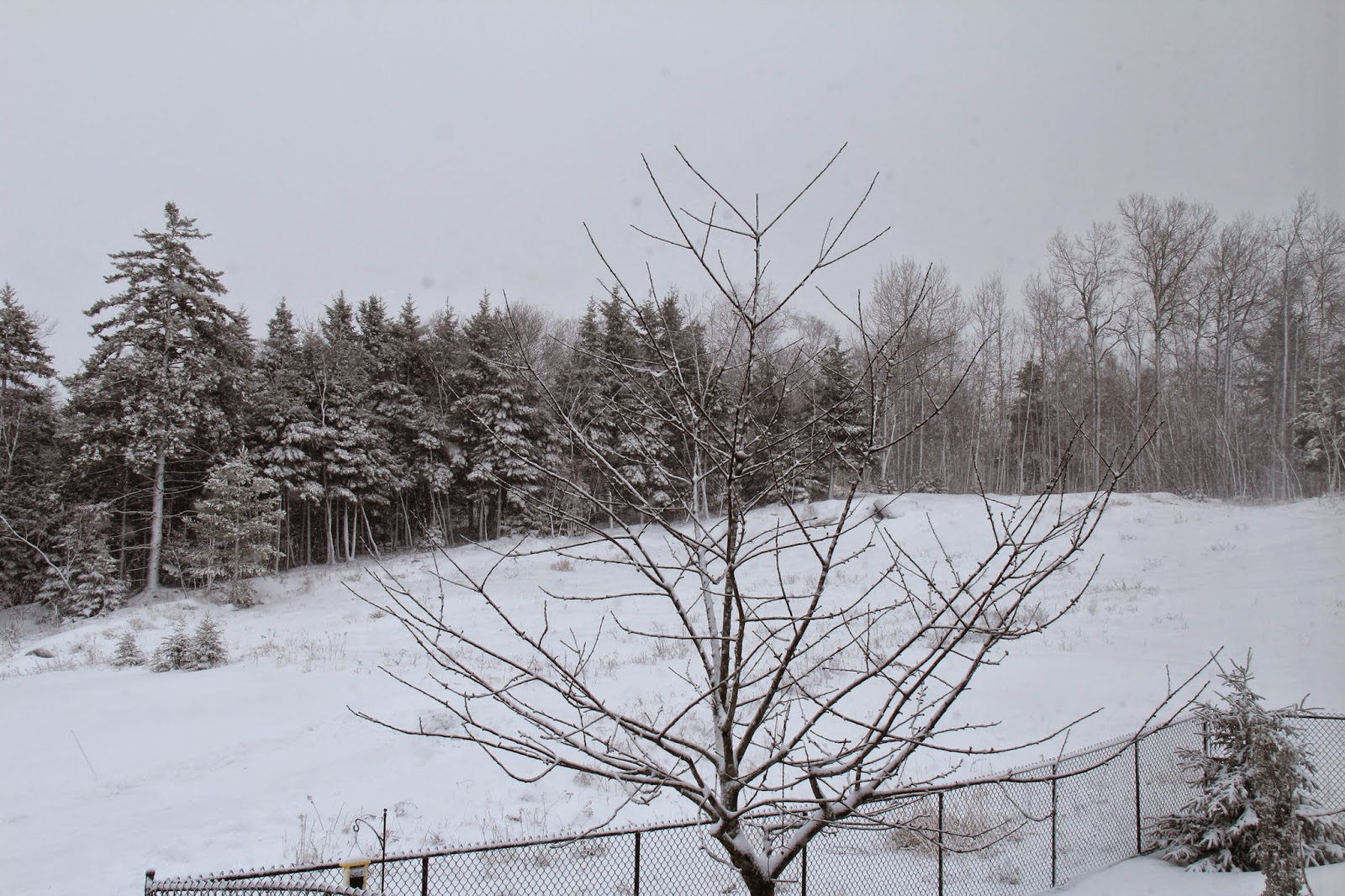 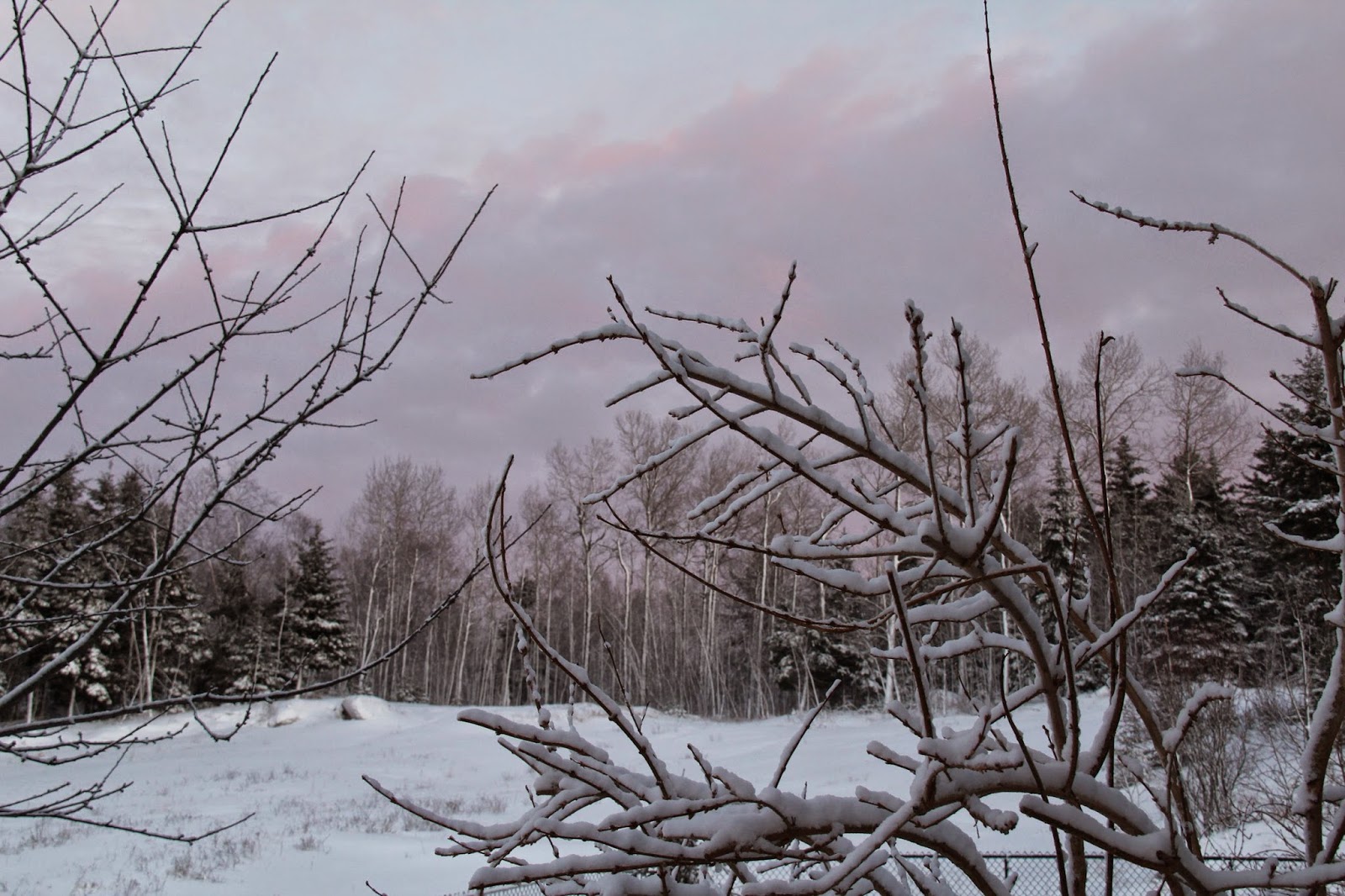 I am not tired of my fairies yet. Fortunnately, there is no one to say that I have to be! 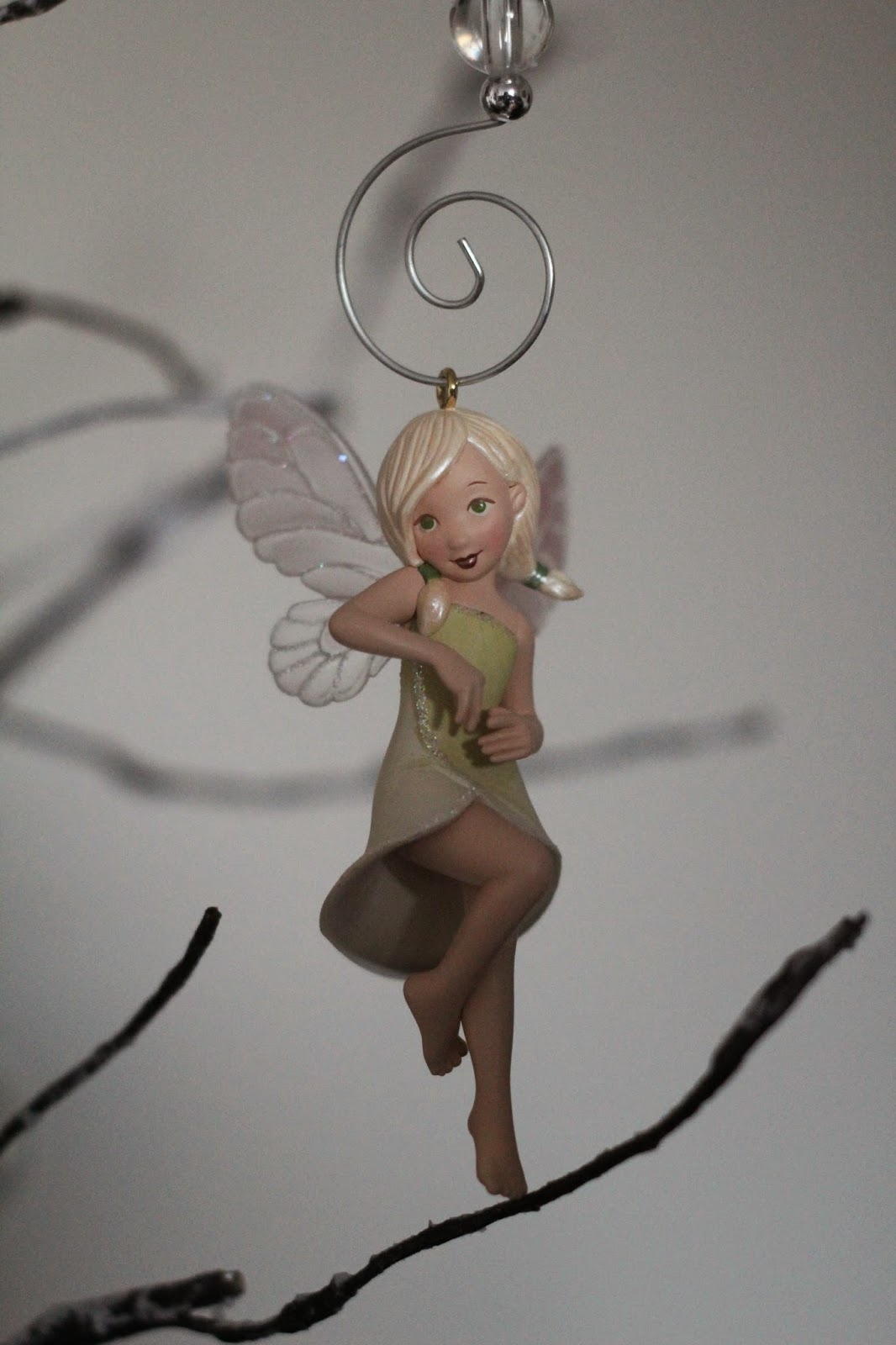 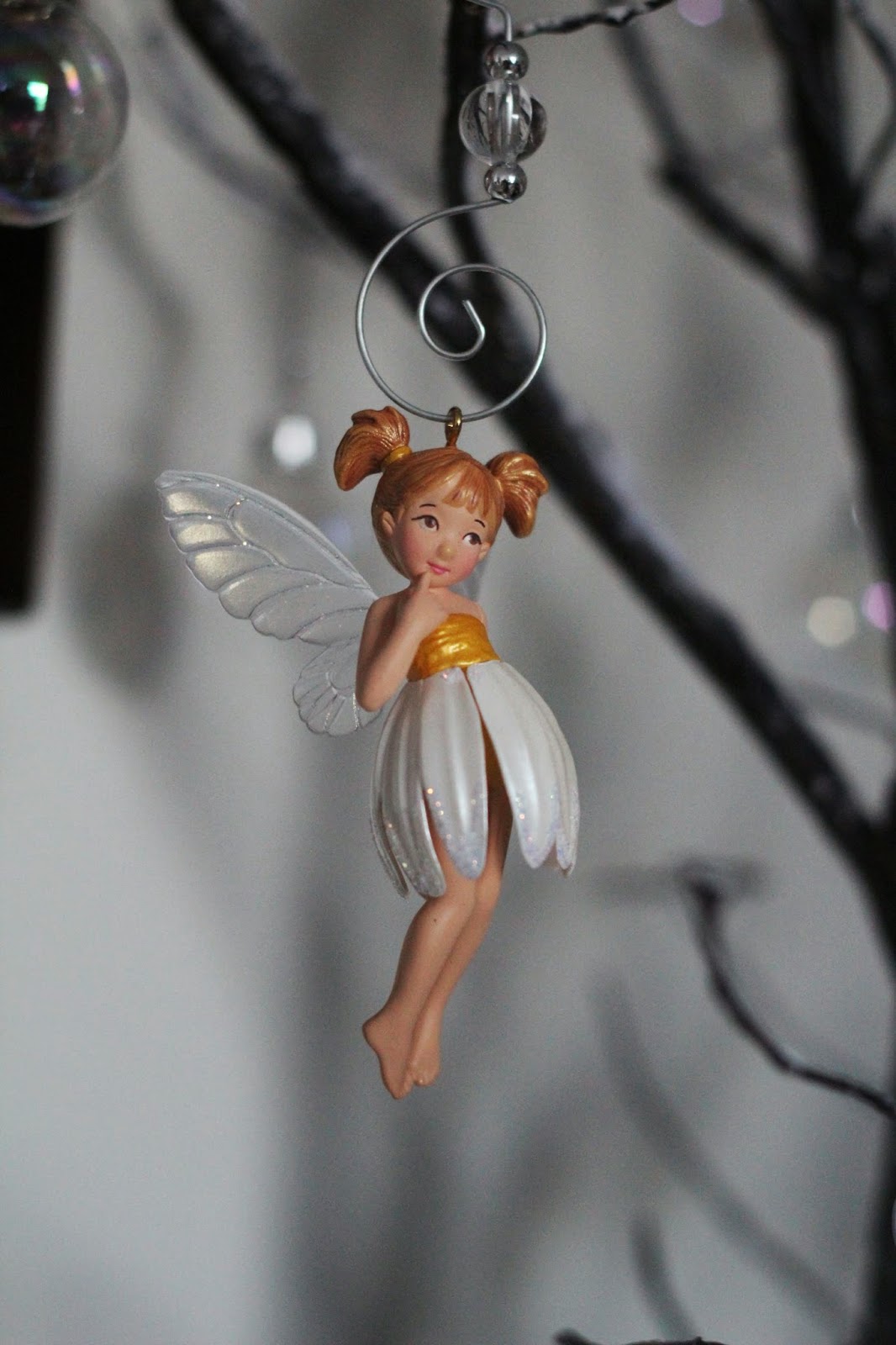