Eyes On The Finish Line

The weather has also taken a sudden turn; last week we were still seeing temperatures of 18 - 20 degrees Celsius. I  walked to my 7:30 pm piano lesson on Tuesday night and didn't need a jacket. Rainy over the weekend though.

This week the temperatures have been around 10 degrees Celsius, or less.  I walked to my piano lesson on Tuesday night, wearing my nice, thick hoodie, and wished I'd dressed warmer and worn gloves.  And more rain coming t his weekend, apparently.

Have still been feeling mostly good. Workouts have been happening, lunches have been packed...Up until this week.

Have been sticking fairly close to my workout schedule, and am in the last week of the last phase...Really wanting to finish by the 31st.

So, as I say, all has been going pretty well until Monday. My workout plan has 3 phases, and each phase is 4 weeks. I'm in the 3rd phase, which I have been finding to be the toughest (not a surprise, I suppose), and Monday was the final workout of Phase 3, Week 3...Well sort of, but I'll save that for another post...What I considered to be the last one anyway...

So third time I've done that workout, but it seriously kicked my butt. I had noted the last time that I should increase my weight for a few of the moves, so maybe that had something to do with it. I guess I had swapped a couple of other workouts during this week, which may have left me more fatigued, I don't know. I will say, I was feeling less energetic last weekend anyway, so maybe it's just a minor downswing.

I finished with jelly-limbs, and dragged myself up the stairs. We had dinner cooking in the oven while I was doing my workout, and the timer went off just as I was coming up. I was seriously a bit worried, taking things out of the oven, that I was going to drop something. Even dishing it up and carrying plates felt like an effort.

So there were no dishes washed, no lunches packed that night...I really didn't want to move any more. I was tired on Tuesday, but it was an off day on the workout schedule anyway, so I just took it easy.

Started week 4 last night...Today is another off day; I had thought about throwing in a cardio workout today, but decided to stick with the rest that's on the schedule...and then I have until Monday to finish out the last week. I should be able to do it.

Already trying to figure out what I will do next...

Aside from the workout stuff, I have been playing around with painting on my own. It's one of those things that I always wanted to try, but it was hard to figure out how to get started.

So, after a half-dozen paint & sip nights, I got some paints, etc., and gave it a go. I played around on mixed media paper for a bit, and then finally made the jump to canvas paper and did these two paintings. 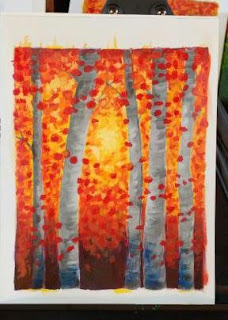 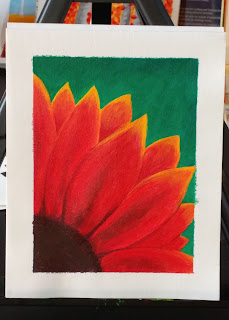 I did some research on paint colours, which also led to looking at recommended brands. These are done using Liquitex Soft Body Acrylic - Amazon has a nice starter set of 8 colours, so that seemed like a good way to start.

I'm using canvas paper, rather than using canvas stretched on a frame - that seems wasteful/expensive when you are just learning and trying to figure out what you can do, plus they take up space - what do you do with all of them?

These are small - I have canvas paper pads in 8x10 and 9x13, and I do kind of wonder if it will be hard to move to larger size if I let myself spend too much time doing small pictures, but we'll see.

What's hard about doing it on my own:
- Figuring out what to paint; I've been google searching for examples I can work from
- Figuring out how to start once I choose a picture; that first touch of brush to canvas is hard

Posted by JavaChick at 9:26 PM No comments:

Up Days and Down Days

Tuesday, Sept 27
My energy levels vary widely; I go from feeling like a superwoman, that I can do it all to feeling like I can hardly get through the bare minimum. I find it frustrating because I never know how I'm going to be. I have wondered if it is related to hormone levels? I think lately some of it has been due to - or exacerbated by - stress.

At the moment, I'm still kind of stressed (though coming down) and I am feeling pretty good. See? Here I am blog writing on a Tuesday evening after washing dishes, playing piano, doing a short workout and making a salad to take in my lunch tomorrow (of course this could also have something to do with husband bringing me a coffee after work - I hope I sleep tonight).

Tuesday, Oct 4
Oh hello! I meant to come back and update at least a couple of times during the week, but things have been busy. Trying to think about what I actually want to do here...I guess two things:

1. Try to track how I'm feeling
2. Work on doing things to make me happy

Not that I'm not a happy person...It's more that I feel like I don't do anything; I go to work, I come home, I do it all over again....I feel like I don't have any interests I guess? Or more accurately: there are things that I think I would like to do someday...But you have to take some first steps or it never happens.

How am I feeling?
Actually still pretty good. There is still some deadline pressure/stress at work, but nothing like it had been for the past month or so.

I don't know if I'm feeling like I can do more because I happen to be in a good energy phase, or if doing something new is waking up my brain and making me feel more energetic. 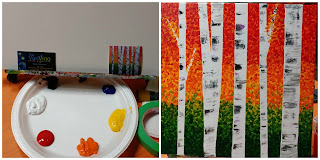 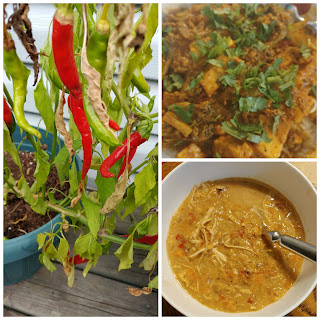 Posted by JavaChick at 10:16 PM No comments: