I Need A Vacation

Let's talk about October. I started off with a decent level of optimism. Feeling ready to work my way back to a good place with the eating, get back into my normal exercise routine.

Yeah, well. Life is what happens while you're making other plans.

October started off well enough. The long weekend rolled around and we probably enjoyed a few too many treats, but we had a good time.

The following Wednesday, Husband was doing a load of laundry when he heard a loud 'thunk' from the washing machine, followed by the smell of burnt rubber. Sigh. We called for a repair guy, and the soonest appointment we could get was a week away, on Thursday.

Friday morning: Husband wakes up with a red splotch on his torso; it was swollen and sore, looked kind of like a rash. He goes on with his day, but feels worse and worse as time goes by.

Saturday morning: The red splotch is now very angry looking. Husband is in pain and is experiencing fever and chills. Off to the clinic we go, to be told by the doctor that it's is a spider bite. We leave with a prescription for antibiotics.

Meanwhile, I am freaking out because spider bite! I have a hard time sleeping, I am busy all day taking care of husband and quietly having panic attacks.

Tuesday: Off to our family doctor. The infection is still spreading. Off to the hospital we go for the first of 3 IV antibiotic treatments.

Between my spider phobia and Husband's needle phobia, it's not a good week in the JavaChick house.

However, the IV antibiotics are the turning point, and by the third day Husband is much better. I'm still not sleeping, but at least one of us is improving, right?

The washing machine repair dude shows up. Our machine is fixable, however it will be a week and a half minimum, possibly longer to get the part. Husband has been waiting for the right opportunity to replace the ancient, 2nd hand dryer that came the house, and going another week and a half, possibly longer, before we can do laundry is not appealing, so I agree to buying a new washer and dryer.

Plus, during his convalescence, Husband noticed that we have blue splotches in the middle of our TV screen. I have been noticing this for a while. I have been willing to put up with it. It really only shows up during dark scenes. I'd rather not buy a new TV. (This is how my mind works). I swear, husband lives for the chance to buy new TV sets.

So on Friday we go out and buy a washer & dryer. On Saturday we go out and buy a TV. Now, in addition to my heightened spider fear, I am hyperventilating from sticker shock. I don't like spending large amounts of money all at one time. Plus, I don't really like the new TV. Husband tells me it is better than the old one and I will get used to it (I still don't like it).

Add to that all the rainy, gloomy weather we were having and I was pretty much a wreck. One rainy day makes me feel sleepy and unmotivated. A week of rainy days makes me feel fuzzy headed and depressed.

Things did quiet down after that, and life started to get back to semi-normal. Then toward the end of last week we realized Zappa wasn't himself. On Saturday I realized he was hardly eating anything - he wasn't even interested in his favorite cat treats and that was a huge deal. So I pretty much worried the  rest of the weekend and up until we saw the vet yesterday. I spent a lot of the weekend sitting in a chair with my Kindle and letting Zappa sleep in my lap.

At the vet's office, Zappa had a thorough exam, x-rays and blood tests and nothing showed up. This was good in that it eliminated a bunch of bad possibilities, but it didn't tell us what was wrong. He'd lost weight and the vet was worried about him not eating, so she said to try giving him a quarter of a Pepcid AC tablet once a day for a couple of days, in case an upset stomach was the reason he wasn't eating. So I went out and bought Pepcid AC for my cat (never would have expected that), and we gave him a quarter last night and he did eat some. Then today he was actually waiting to be fed when I got home from work, like he usually would be, so that seems like a good sign. I wouldn't say he's 100%, but at least he is eating and that's an improvement.

I realize that many people have larger problems and none of this was really tragic. It was exhausting and disruptive though.

I need to get out and tidy the yard for winter, put away all my garden stuff, but we had so much rain and then so much other stuff going on that it just didn't happen.

Our pile of wood is still sitting in the driveway and neither one of us really wants to go near it. I tried wiggling my fingers at it while saying  Wingardium Leviosa but nothing happened. It's because I didn't have a wand, right? Somebody find me a wand. Otherwise I have no idea how that wood is going to get stacked in the garage, and we will freeze this winter.

Okay. I'm done. I don't have the energy to whine any more. 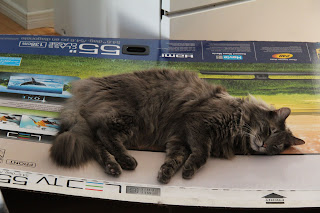 The birds ignore this peanut wreath feeder all summer, now I can't keep it filled. 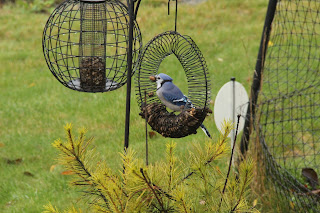 In my diminished mental state while all this was going on, I put a bowl of grapes on the patio table because the fruit flies were driving me crazy. I forgot about them. A raccoon found them, and while I do not begrudge him the snack, I wish he had not broken my pretty ceramic solar light. Sad. Also, I could have done without the pile of scat outside my patio door. Is my life entertaining or what? 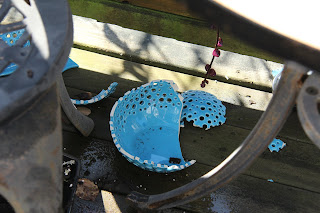 At least taking pictures of the moon is still fun. 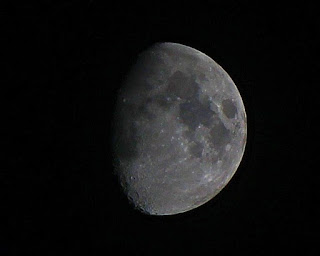