Figuring Out The Hows and Whys

[I know. That title looks funny. Oh well. I started this post almost 3 weeks ago. I planned to give it a week, to think about it and see what I could remember. Which I did. I kept coming back and adding little notes. Then Husband got sick for a week, and our washing machine broke down, and things were just turned a bit upside down. Anyway, time call this one done. It's a long one. Sorry. I suppose it's also more for me than for anyone else, but I'll welcome any thoughts & comments!]


From November to early April, I lost about 6 pounds. I was not actively trying to lose weight. I did not feel like I was depriving myself, or making myself miserable (for the most part - I will get to that). I was doing moderate amounts of exercise, not killing myself with workouts.

Then in late April I suddenly turned into a potato-chip-and-pound-cake-scarfing fiend. Those pounds came back in short order, and I've picked up a few more (seems to be the way it goes). I already posted about this - at the end of May - and what have I done about it? Not a whole lot.

Reading this post about all calories not being equal over on Cranky Fitness got me thinking about what exactly I was doing while those 6 lbs quietly melted away...And then thinking that what I really need to do is write it down and figure out what I was doing right. That seems like the sensible place to start, right?

It should be stated: This is a whole bunch of random stuff that I remember. It's not any kind of organized weight loss or health plan because I wasn't planning anything at the time. I was not counting calories or points. I was not measuring portions. I was not following any specific diet. I was just living. Husband was away a lot, I was figuring out how to be on my own after 10+ years of always having him around. I was trying out some things that would have been harder to do when Husband is around - cutting out wheat & dairy, full time vegetarianism.

What was going on:
- Husband left for his first trip to Japan just before Halloween 2011.
- Husband has been traveling back and forth periodically since then, but he was certainly home during some of that 6 month time period
- I went to Japan for a week in March
- Looking back over my workouts now, I would say that when Husband is away I probably get in more workouts, but honestly not more than I have done at other times in the past. A lot of Zumba, strength training/circuit workouts, but also walking, yoga & Pilates.
- When Husband is home, we probably eat out once a week. When he was away I rarely ate out.
- I did not count calories or otherwise track what I was eating (wishing I had now, so I would know exactly what I was eating)
- I did often stop think before eating to determine if I was really hungry or really  needed to eat. Honestly, I think this came later as I realized I was losing weight, and I felt motivated to try. I felt like I was in a good place with my eating, like I was in tune with my body.

What I was eating:
- I did two weeks of strict no wheat, no dairy. After that I tried to avoid it most of the time but sometimes if I wanted pizza, I ate pizza. I really missed cheese a lot. Bread & yogurt too, but mostly cheese.
- When husband was away, I was mostly vegetarian, though I did eventually start eating fish once or twice a week.
- I ate corn pasta, brown rice pasta, soba (buckwheat) noodles, corn tortillas.
- I sometimes ate guacamole & Organic Tostitos as a meal. Yes I did.
- I also ate fish tacos with guacamole. And black bean tacos with guacamole. I was probably eating 2 or 3 avocados per week.
- Lots of Peanut Butter Noodles
- If I wanted something sweet I had a couple squares of Lindt Dark Chocolate with Sea Salt (I love that stuff!)
- I had the occasional margarita or can of coke.
- I cooked with coconut oil most of the time.
- I was eating the little bags of chips with my lunch at work semi-regularly. It didn't seem to be doing any harm for a while, did not seem to be sending me out of control.

This is not to say that everything was all kittens & rainbows for that 6 months. I had my bad moments when Husband was away and I was missing him. I had periods of work stress and planning our trip to Japan was a little on the crazy-making side.

And. Every day that I avoided wheat & dairy was hard. However, those restrictions were not motivated by weight loss and I definitely was not going hungry. Avoiding wheat and dairy meant I had to stop and think every time I planned a meal or wanted to eat something. I think that stop for thought may have been a big factor in the weight that I did lose.

Where it went off the rails:
- Who knows why it suddenly happens? It often feels so random!
- I do know that stress eating was part of it. Husband was away, high priority project at work, and the cats were peeing all over the house after we were so unkind as to leave them with a house sitter and take off to Japan for 10 days.
- And I know that once I give in to the potato chips and pound cake (or whatever), they can take over very quickly.
- I don't know if it's the 'what' (specific foods) or if it is the 'how' (allowing that out of control, mechanical feeling when) I am eating.

I know 6 lbs over 6 months may not sound like a lot. But it's the most I've managed to lose in...um...well, ever I think. And I did it almost without noticing. I must have been doing something right.

I'm kind of sad September is over. I feel like I've missed out on sunny September days when I should have been out enjoying the last bit of summer...but I think that's because we've been getting a lot of rainy weather, so there haven't been a lot of nice days to enjoy.

Eating: Husband came home from Japan and noted that I am pretty much off the wagon when it comes to avoiding wheat & dairy. I was going through a phase where I just couldn't think of things I  wanted to eat and didn't want to be bothered with cooking. Which leads to making poor choices when I finally decide I'm hungry and I need to eat. So, at the time, I decided it was better to let myself have a grilled cheese and tomato sandwich on whole grain bread than to eat potato chips for dinner (sad but true). So far I seem to be doing okay with the wheat & dairy, so I'm just going to see how things go.

However, there have been some bad habits creeping in. Like those bags of potato chips that are so easy to grab from the lunchroom at work. I don't need to be eating those every day. So my goal is to stay away from them for the next four weeks. I can do that.

Still picking tomatoes - at least I was a week ago. It rained really hard all weekend, so I didn't get out to the garden, but the previous weekend I brought in another bucket full. Aren't they pretty? 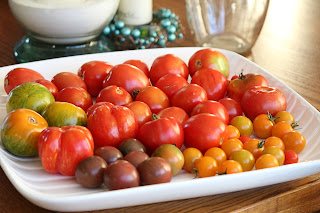 So we have been eating lots of tomatoes...Really, there is pasta under that pile of tomatoes, olives & feta. 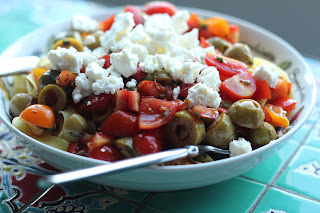 I have also experimented with taking pictures of the moon. I was surprised at what I can get with my little camera and lack of photography experience. This was cropped out of a larger image taken with a 55-250mm lens. 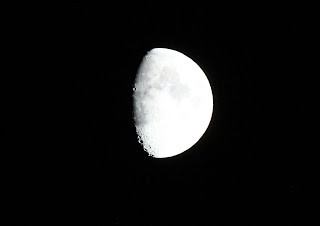 Today was a busier day than I wanted it to be, and I didn't quite manage to get everything done that I  had hoped, but I still accomplished a lot. The rest can wait for tomorrow. October off to a good start!
Posted by JavaChick at 10:31 PM 6 comments: