January 2012:
~ Lovely mild weather, very little snow. Just the way I like my winter
~ Three weeks of Husband's work saying: You have to go to Japan! Oh wait, we need  you here...But we need you in Japan! You go in two weeks! Well maybe...It seemed like a lot longer than it was. I like my routine. If my routine is going to change, I like a detailed plan. I won't say I was glad to see Husband leave, but I was glad we weren't waiting on a decision any longer.
~ A solo trip home to Nova Scotia...On the same day that Husband left for Japan. That was the biggest disappointment - the timing when they finally made the decision. But I still had a good visit with my family. One of my sisters was home visiting from out west, so I definitely wasn't going to miss the trip.
~ I am a little stressed about things going on at work. Well, more than a little. I am working very hard to distract myself and not dwell. It's nothing I can change, so I have to power through. Last weekend I sat down and rewatched the entire first season of Big Bang Theory on DVD. It makes me laugh. Laughing is good.

So is exercise, so without further ado...

Other good stuff - His & Hers Anniversary gifts; apparently the 10th anniversary is the camera anniversary... 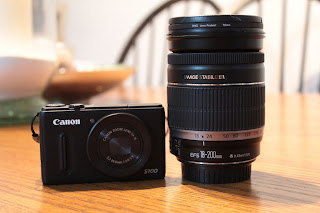 Our anniversary was actually December 31st...I got my gift a couple of weeks early - a 15-200mm lens for my Rebel T3i. Husband wanted a compact camera to take with him on his travels, and had it all picked out but we didn't manage to get our hands on one until Jan 13; not a moment too soon because a week later he was headed for Japan. 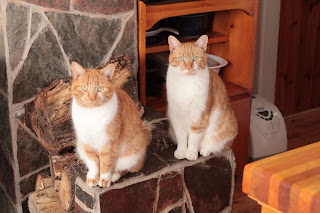 The prettiest pooch ever! 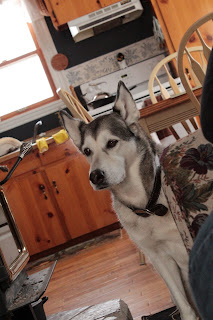 I'm definitely a cat person, but I am rather fond of my sister's dog. Not only is she pretty, she is extremely polite and well behaved. My sister is awesome too and I was even more happy to see her. :)

And that was January. Bring on February.
Posted by JavaChick at 8:45 PM 4 comments:

We have been having an extremely mild winter which is just the way I like it. We had one big snow storm in November, then nothing until last Friday when we had a storm. Then on Tuesday it warmed up to 8 degrees and all the snow was gone by Wednesday. Today we had another storm - started with snow, then ice pellets and freezing rain, and it's supposed to warm up enough to rain after that. Honestly, I don't think we could ask for a better winter. 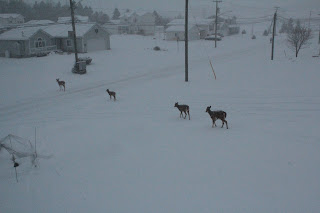 Last Friday
I did work at home today; I didn't like the idea of having to drive home in freezing rain. I had planned to go to Zumba this evening, but I didn't want it badly enough to go out in the weather. I'm sure it wouldn't stop a lot of people, but I freely admit to being a wimp about winter driving.

I had kind of a bad day. I've been feeling a lot of negativity about work lately, and today was even worse. I won't go into that, it's not why I'm here. I'm here because by the end of the work day I really just wanted to sit in front of the TV and eat guacamole. But I talked myself into a treadmill walk. I was sitting by my desk, putting my sneakers on, feeling cranky and trying decide between TV or tunes. At which point I decided it was time for a change of strategy. 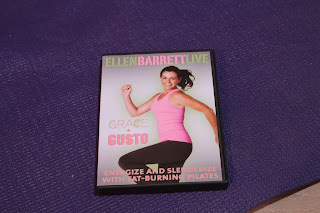 I had this new Ellen Barrett DVD sitting there. Ellen Barrett workouts always make me feel good. They require some concentration, even more so when it's a brand new workout. So off came the sneakers, and into the player went the DVD. The workout flew by. There was one shoulder stretch at the end that hurt in a way that tells me I should be doing it every day. And I feel better. Thank you Ellen.

On the subject of new workouts, I've tried two others so far this month. 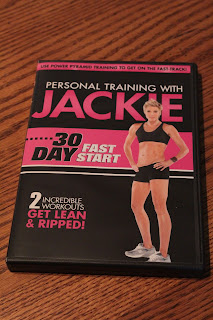 My Jackie Warner collection is nowhere near as big as my Ellen Barrett collection yet, but I have four DVDs now and I like them all. This is the newest; I've only had a chance to try the upper body workout so far.

And then, thankfully it was over.

It went really fast. It was doable, but challenging. Each segment is two exercises that you alternate between, doing a pyramid; so alternate between pushups and bicep curls (pushups were from the knees, then you come up to kneeling for the bicep curls), starting with 1 rep each, then adding a rep and repeating until you get up to 10. I found it really challenging to change positions and keep up with the pace on the DVD; I don't know whether to blame that on it being the first time with the workout, my bad shoulder, or my being a wimp. In any case, I did survive the experience and was sore in new spots the next day which makes me happy because I know I've hit some muscles I don't normally work.

Now I just have to survive the lower body workout.

And finally: Zumba Circuit! I didn't make it to the regular Zumba class on Monday or Tuesday. I've been avoiding the Circuit class because I was afraid I wouldn't be able to do it with my bad shoulder.  I ended up having a lot of fun!

I tend to worry about new classes, I think I will be lost, I won't keep up, etc. The thing is, I've been doing this fitness thing for quite a while and since I like variety I've tried quite a few activities; maybe not so many live classes, but a lot of DVDs and a lot of different workout plans. That doesn't mean I can walk into a class and get everything right the first time, but it's usually nowhere near as bad as I think.

Zumba Circuit was fun. We did one song to warm up, then everybody ran to stations. There was a max of 3 people per station, and I ended up going around with 2 ladies who were also new, which was nice; sort of a 'we're in this together' vibe. Most of the stations were not anything new, except 2 that used TRX - that was kind of exciting as I've never had a chance to try TRX before. That was also the only thing that bothered my shoulder, so I guess I won't be signing up for TRX classes any time soon.

I enjoyed the class, I worked hard, I walked out feeling good. Note to self: get over this fear of new things! And fun workouts make you feel better!

Now. Did someone mention guacamole?
Posted by JavaChick at 9:10 PM 7 comments:

Husband and I have had a lovely two week vacation, relaxing at home; sadly it's almost over. Back to work tomorrow! I'm glad we had the chance to goof off at home together for two weeks, as it's sounding like Husband will be heading back to Japan soon.  Anyone have any suggestions on what to see in Japan in late January - early February? We're looking at the possibility of my flying over to meet up with Husband when he finishes up this stint in Japan. Nothing definite yet, and it's probably not the best time of year to visit, but it seems like a good opportunity.

For the first part of vacation, I divided my time between some extra chores around the house that I'd been meaning to catch up on, and sitting around on my butt. Husband & I both came down with a bad cold that lasted through Christmas Eve to Boxing Day, and somehow after that I barely managed to do anything productive at all. Oh well, vacations are meant to be enjoyed.


Dec 31st was Husband & my 10th wedding anniversary. My anniversary gift from Husband is a new lens for my camera which was very exciting. I took a bunch of pictures to play with it. I would have posted some cute ones of the Fabulous Felines, but after I downloaded the photos, and deleted them from the card, I discovered that they are not in the folder where they were supposed to have been imported. I have no idea where they went and I suppose I've lost them. Sigh.

We are having absolutely fantastic weather so far. We did have snow that arrived just before Christmas, then melted right after Christmas. There have been a few cold days, but mostly it was pretty warm. When I checked the weather earlier today it was 8 degrees celcius (for those who don't speak celcius, google says that  it is 36 degrees Farenheit right now, and the weather page says 2 degrees celcius). For January in that Maritimes, that's downright balmy. I will enjoy it while it lasts because I'm sure it won't last that much longer.

Happy January everyone!
Posted by JavaChick at 8:14 PM 5 comments: