Not quite kicking and screaming.

So, I had told Husband that while I was working on this weight loss thing, he could eat what I eat or make his own. However, Husband stepped on the scale recently and was not happy with what he saw, so he would like to lose a few pounds himself...

Saturday I made Sweet Potato Lentil Chili from Eat, Drink & Be Vegan. We had a box of Coconut Shrimp in the freezer that didn't get eaten over the holidays. Husband was wanting to eat them so I said we could have them along with the Sweet Potato Chili. He did eat it, but he let me know that he didn't love it (in all honesty, this has been my least fave of the Eat, Drink & Be Vegan recipes so far - guess that's what I get for feeding him a recipe I hadn't tried out yet).

He's been pretty happy with the Slow Cooker meals though, and with the Chicken Cacciatore I made sure we both had a good serving of raw veggies to munch as well, which filled us up and kept Husband from going back for a second helping. Raw veggies with dinner is something that I try to do on a regular basis, since that's my favorite way of eating veggies, but lately we've got out of the habit. Time to jump back in!

Yesterday we stopped at the grocery store on the way home and he asked what we would be having for dinner tonight. I ran down the available options, ending with the container of leftover Sweet Potato Lentil Chili in the freezer. I said I thought he probably wouldn't want that, but he said he would eat it as long as he had some protein on the side.

After perusing the meat display, he decided to get himself a small steak and make himself a stir-fry instead, using up the rest of those frozen veggies that I don't want to eat. Works for me.

Husband then surprised me by comparing calorie counts on snack items he was considering, and then choosing the one he felt was best. I have no idea where that came from - maybe my habits are starting to rub off on him a bit.

Since I didn't have to worry about feeding Husband as soon as we got home from work, I changed into workout gear and headed for the basement. I was somewhat surprised when I came back upstairs to find that he hadn't made his dinner yet. Seems like I need not feel guilty about taking time to work out before dinner, since he was in no rush when left to his own devices.

Off we went to the kitchen to make our separate dinners. I heated up my leftover Sweet Potato Lentil Chili, and since we had some tortillas left in the fridge (from when Sister was here - they need to be used up), I made myself a cheese quesadilla to go along with my chili. Add some homemade salsa and I had a very tasty meal...Though I ended up being too full from eating the quesadilla and only ate about half my chili.

The only down side is the extra pots and other cooking utensils - when you are cooking two separate meals it makes more of a mess.

We are still having nasty cold weather - even colder than the beginning of the week. Eek. Spring is coming, right?

Seems like most of the Fabulous Feline photos lately have featured Fred - he's just better at posing for pictures. However, we wouldn't want George to feel left out, so here he is demonstrating how to go about beating the January weather...Stay inside with a blanket! 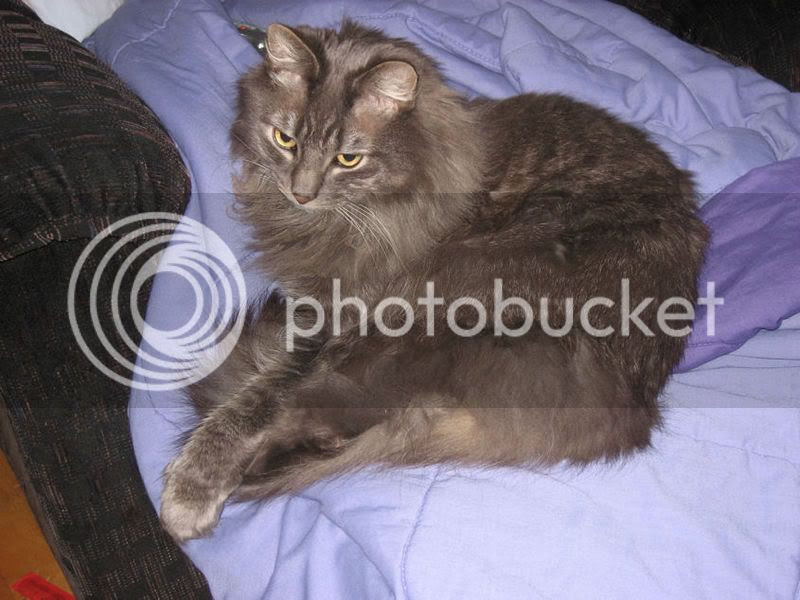 Posted by JavaChick at 9:55 PM

Fred definitely has the right idea! And good for husband for getting on the bandwagon with you! It is always so much easier when everyone is on the same page...

yay for hubby tagging along on the journey!! Love the kitty cat!!

I like the raw veggies best too, although in this cold weather I've been eating a lot of steamed veggies (the only way I'll eat the frozen ones!). That's great that your good habits are rubbing off on your husband. And the quesadilla sounds so good.

SO CURIOUS how the weekend was!
was your husband still dragged along?
Mine was all about the healthy eating---until the kick off of the steelers game.