Hello? Anyone still reading? I know I keep disappearing, but I am still alive and kicking, just a little overwhelmed trying to keep up with everything lately. You should see my house. Or rather, I’m glad you can’t see my house. Dude. Disaster.

I was also sick last week. Some sort of flu.Wicked headache, stiff/sore neck, nausea. I was starting to imagine that I was dying of some weird, obscure disease, but then Husband told me some of his coworkers had described the same symptoms. So I’m going with flu. Or there is something in the water and we’re all dying of the same weird, obscure disease. There was a boil water order on over the weekend after all.

However, I am feeling much better. Just in time for birthday presents! My birthday is coming up in a few days (the big 4-0 which is just mind boggling – how did that happen? I still don’t feel like a grown up) and on the weekend I got an early birthday present from Husband.

Among other things, he ordered us both Bento Boxes and on Sunday he cooked up a storm (ok, I helped) experimenting with some recipes. Result being that for the past two days he has packed my lunch for me in the morning before work. I could get used to this.

The bottom layer of my Bento had a Teriyaki rice with Chicken & tofu, plus a little  bit of stir fried chicken and snow peas. 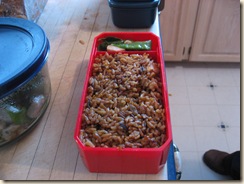 Then in the top layer some broccoli slaw (that we bought prepared), a one egg omelet, a little quick pickled cabbage and soy sauce carrots, and some sushi ginger. 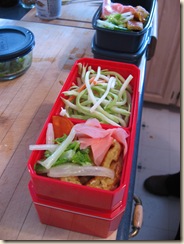 Then on goes the lid and a big elasticized band to keep it all together. Mine even has a matching carry bag. 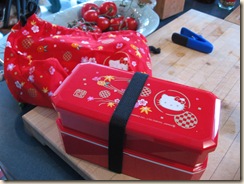 And did you notice? 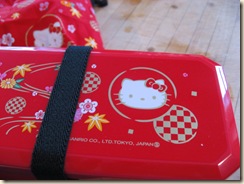 I also must confess that I have been out in the garden a couple of times and taken Frank for a walk, but have not got around to posting pictures. Will try to do that soon.

Posted by JavaChick at 8:56 PM

It's time to quit waiting to feel grown up. At 57 I look around at everybody at work thinking "But these are Real Grownups!"

Enjoy your youth as long as you can! 40 IS young - take it from me.
Your Bento boxes are way cool.
Happy Not-Quite-Your-Birthday!