This past weekend was a bust weather-wise – it rained buckets – and we haven’t quite made it back to sunny skies yet, so it seems like a good time for a rewind.

The Saturday before last was beautiful, hot and sunny. We had to take the cats to the Vet in the morning. This always stresses me out, as the cats don’t like it and the meow pitifully for the entire car ride, there and back. Makes me feel awful. This year it was worse because the Vet we have always gone to retired last fall so we had to go to a new Vet (strike 1) which is a little bit of a longer drive for the cats to put up with (strike 2) and for some reason Husband was dragging his feet and I knew we were going to end up being late (strike 3).

But we did make it, only a few minutes late and we all survived. The cats passed their checkups with flying colors and the Vet commented on their temperament – even though they were obviously not happy to be there, they were quite easy going about the whole thing.

Since we were almost to the Farmer’s Market, we went there after leaving the Vet’s office and picked up a bunch of produce, then headed home. I expected that Husband would want to stay home while I went out for groceries, but he surprised me by coming along. In retrospect, I think he was afraid I would come home with whole wheat buns for the hamburgers we were planning to BBQ if he let me go on my own (and I probably would have).

While I certainly have to objections to hanging out with the Husband, I had planned to visit the garden center after getting groceries. I mentioned it to Husband and said we could go home and I could come back on my own if he wanted, but he said to go. Then of course he stood around looking bored so I didn’t feel like I could take my time and enjoy it.

Which means that Trip #1 to the Garden Center this  year didn’t see me bring much home. 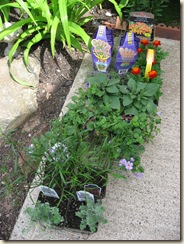 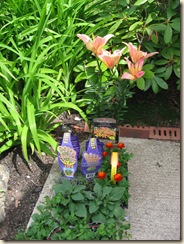 Once we unloaded the groceries, I headed back out. It was time to finally start doing something with the flower bed by the driveway. 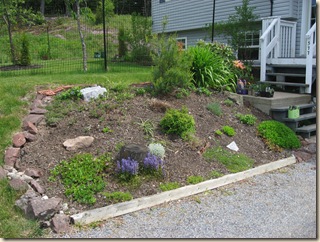 Since the crocuses in April, there have been violets… 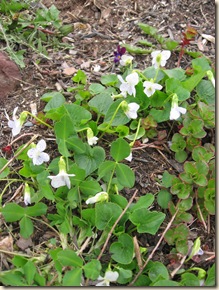 Which are gone now, and periwinkle… 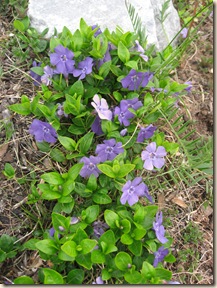 Which is still blooming – I think this will pretty much keep blooming all summer, but I can’t remember for sure.

Right now, we also have this stuff which I planted last summer… 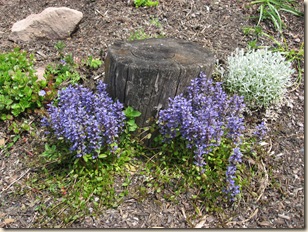 I forget what it was called, but I definitely don’t remember it flowering like this last year. 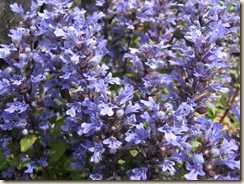 But, there is still lots of space to fill in, so I got to work; as it turns out, it was just as well that I didn’t bring too many plants home.

We noticed that we had some sort of insect nest it the top left hand corner of this flower bed. We knew they were there but couldn’t figure out exactly where their entrance hole was, so we asked our landscapers to check it out (Husband is seriously allergic to stinging insects). The landscapers said they found multiple entrance holes, and they sprayed and hoped they had got it all.

Unfortunately they didn’t. We were still seeing a few insects buzzing around, and when I got out there and started digging, there were obvious holes. For example… 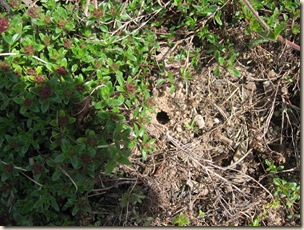 Normally, I like to evenly distribute plants as I go, but this time I decided to stick to the opposite end of the garden. Better safe than sorry.

So the after doesn’t look all the much different. 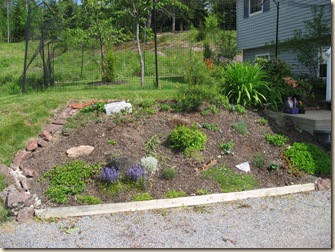 It will take some time for the new plants to fill out and start blooming.

Saturday evening I went out and did some puttering in the fenced in part of the yard. I was excited to see my irises starting to bloom. 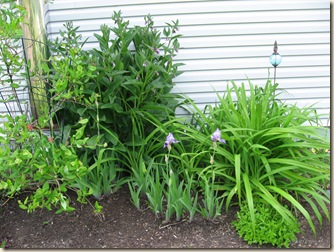 At the back, beside the chimney pipe is a patch of comfrey. It grows really huge and ends up pushing stuff in font of it over. I had intended to dig it up this spring and move it, but I didn’t get to and and before I knew it it was too huge.

I decided to try cutting some of it down with my new Harvesting knife. 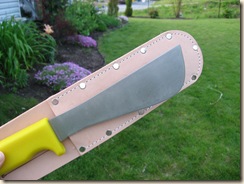 I sort of felt like a murderer, cutting down innocent plants in their prime…but it had to be done. I chopped down the front row – knife works like a charm – but still left a good sized patch. 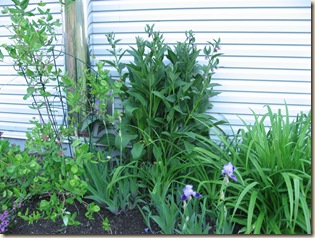 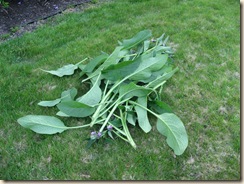 The flowers are actually quite pretty. 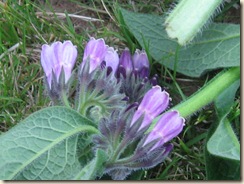 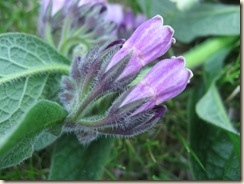 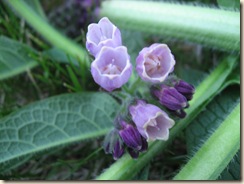 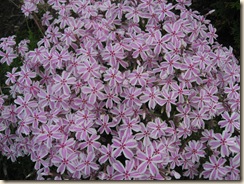 Along with Lily of the Valley, which always make me think of home and my mother’s garden (which is where these came from). 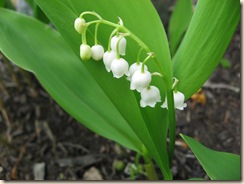 The forecast is still not looking great for the next day or two, but hopefully we’ll get some sun soon – or at least drier weather. So much gardening to do, so little time!

Posted by JavaChick at 8:04 AM

Your flowers are so pretty! My purple irises are almost done now, but the white and purple ones are just starting to bloom.
My lily of the valley is blooming, too. The forget-me-nots are blooming, and the rock soapwort is starting to bloom.
But what's blooming the most? Dandelions.
Dammit.
By the time I finish digging all of them out, I'll have to start all over again at the first end.
Sigh.

youd be so proud of me!
I OFFICIALLY AM STARTING TO GROW STUFF :)

Miz - If I was only going to grow one thing, it would be tomatoes!

So sorry to hear about the vet madness! health issues are always frustrating. The weather here has been so wishy-washy between hot and wet and everything in between. Your plants look great!
Katherine