It’s been really hot the past couple of days, record highs for this time of year. I went out right after work to get some oregano and when I came inside I was laughing at just how ridiculously hot it is out in the yard.

Not that I’m complaining. It’s too hot to move, but I sort of feel like I need to store up all this heat to get me through the winter months. I just hope it cools down enough that I can sleep tonight.

While I was out snipping oregano, I also found a few more ripe tomatoes and a miniature cucumber. The cucumbers are just starting, but I’ve been getting a handful of tomatoes daily since Saturday (check out the garden blog). Soon I should be getting a whole lot more. 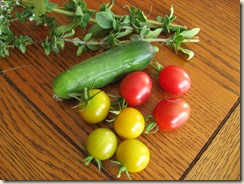 The oregano was to go in a pasta dish for supper. We certainly don’t want the stove on any longer than necessary when it’s this hot, but we had not remember to defrost anything for BBQ. So, Mediterranean Pasta was the plan.

It should have had fresh basil, but I don’t have any.  I figured oregano would be fine (which it was because I love oregano). Then I also discovered that our Feta had gone off, so we ended using parmesan instead. But it was still good. 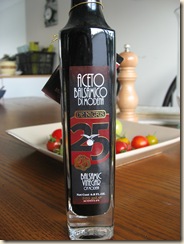 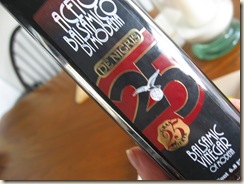 Our favorite Balsamic Vinegar. This stuff is thick and syrupy and very smooth tasting.

And this post has taken a whole lot longer than I planned because I was sure I had posted the pasta recipe at some point, but if I did, I didn’t label it and I can’t find it. It’s hot and it’s late and I’m not going to type it out now. I will say that it was a good dinner and it hit the spot! 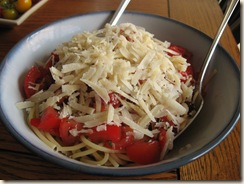 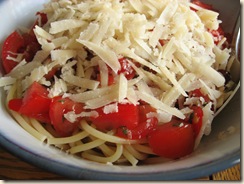 Now I think I am going to stand under a cold shower and see if I can get cooled off enough to sleep.

Posted by JavaChick at 9:29 PM

Your supper looks delish, I haven't had pasta in a long time... hmm, maybe I'll make some tonight! ;)

I now only use Williams Sonoma Basamic Vinegar that's aged 25 years and couldn't believe the difference when I first tried it compared to grocery store brands.

Lynn - Yes, aged is the way to go for balsamic - makes all the difference. We buy ours at a stand in the City Market. I'll have to post that pasta recipe (again). It's really easy and good for warm weather.