Week 23: Let's get this garden started!

Opted to skip Zumba and spent the evening in the garden instead - have to take adavantage of these short bouts of sun.

Tuesday
I've been doing a lot of the internal "I hate that I'm fat" thinking lately....coming dangerously close to "I hate myself for being fat" even. It does funny things to a person. I walked into the drug store this morning, to buy a bottle of water, the negative fat talk ringing in my head and thought "I want a chocolate bar." What? How does that even make sense? I did not buy a chocolate bar.

It did hit me though, that since we've moved office buildings I am around mirrors a lot. The elevator walls are mirrored. That walkway into the mall is mirrored and there are mirrored pillors in the mall itself. Don't know who decided all those mirrors were a good idea, but I think maybe they are doing bad things to my head. Must start ignoring the mirrors.

Wednesday
Pouring down rain. Again. This is getting depressing. And exhausting.

Thursday
Ended up working from home so I could drive Husband to the doctor. Wednesday morning, Husband was feeling what he thought was a kink in his back from sleeping wrong. The the pain moved and got worse, and was still bad this morning so he called the doc. Very likely kidney stones (ouch!) and he is waiting to hear from the hospital to go in for tests.

I normally work from home on Fridays and staying home today is throwing me off because I keep thinking it is Friday; gonna be a bummer to have to wake up and work tomorrow.

On the up side, the sun actually came out this afternoon. It was still kinda gloomy this morning and I was cold almost all day, but it was nice to see the sun.

Friday
Finally got around to trying a TRX class. It's been in the back of my mind for a while, they offer them at the fitness studio where I go to Zumba. You have to call ahead to reserve, and the class times are 5 & 5:30, so that means I have to: a) think ahead to reserve my spot, and b) be sure I can  get out of work on time. Kinda totally missed the part where they have a class at 5 pm on Fridays; I work from home on Fridays and the studio is a 5 minute drive from my house. Totally doable. Of course, this was the last Friday class; reduced summer schedule is starting.

Was trying to explain TRX to Husband - I forget that not everyone pays attention to every fitness craze that goes by...I said something along the lines of it being a harness system that attaches to the ceiling and you do body weight resistance exercises. He looked at me and said "why would you want to do that?" I did not know how to answer that because all I could think was "why wouldn't you?"

Anyway, went to the class. It's only a half hour and it went really fast; I was quite shocked when we started the cool down and stretching. I am not super fit, by any means, but the  class was totally doable. There were a few exercises where I had a bit of a hard time figuring out the positioning, and  one arm exercise that I felt was straining my elbow joints (I have issues with wrist/elbow/shoulder joints though, too many years of working behind a computer), but for the most part nothing I couldn't handle.

I knew going in that  I most likely would be fine, the class is meant for all levels after all. Still, there is always that little bit of doubt. And then I feel like other people are surprised when I can keep up. Very likely just me projecting.

Saturday & Sunday
The weekend has flown by as usual. Spent most of today getting my vegetable garden started. The actual in ground garden is almost done. I have a bunch of plants to get put in containers. Hopefully we will get a stretch of decent weather and I can get it done this week. I think I even  managed to avoid getting a sunburn, despite having spent most of the day out in the sun. 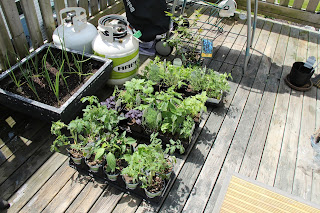 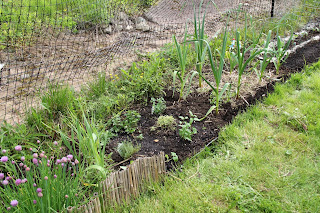 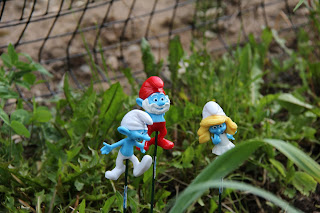 I've got cucumber transplants in. That white stuff is diatomaceous earth which is supposed to deter slugs. We shall see if it protects my transplants. In front of that, snap pea and green bean seeds are in. The section at the end is still to be planted. 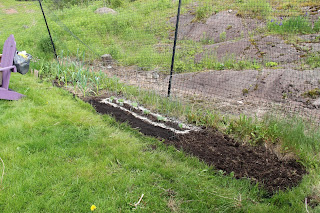 Hardly saw the cats at all today; it was pretty hot and I think they were sleeping. They are usually around in the late afternoon/evenings though. 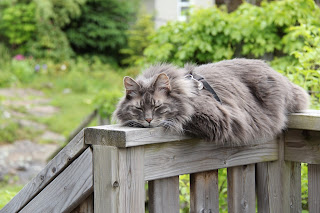 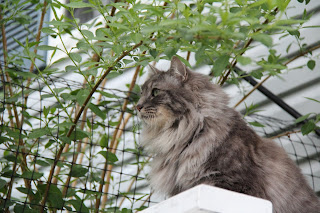 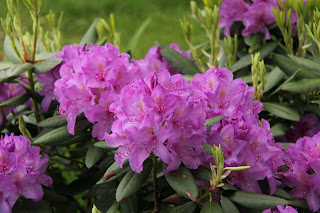 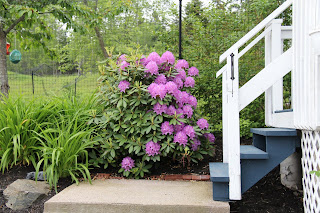 Posted by JavaChick at 9:45 PM

Mirrors are evil, especially the kind not supplied with flattering lighting, or the kind you don't know is going to be there so you don't suck in your stomach and pull your shoulders back first and actually catch yourself with normal sloppy posture. At least in my experience.

On the other hand, sometimes I'll walk around with spinach in my teeth or a smoothie mustache for hours and in that case, an encounter with a mirror or two could come in handy.

So cool you're trying TRX, sounds like you're off to a great start!

holycrapisitreallyMONDAYAGAIN.
Id love to join you for a trx monday :-)

Ohhhh, flat cat! More beautiful than the rhododendrons, and he knows it.

Crabby - Not sure how soon I'll make it back for another TRX class, but I definitely plan to. It was a nice change.

Miz - Funny how quickly Mondays seem to come round...

Mary Anne - Zappa says thanks, and yes he does know it! :)

Love the rhododendrons! Don't have them here.
It sounds as though your weather is similar to ours - wet and cool. Hope summer gets there soon!

Bag Lady - our weather has been much nicer this week. Finally! Hope it lasts.