Week 25: Let's Talk About Something Else

I could talk about how crappy the weather has been. Again. For the long weekend even. And how I can't believe it's July 1st when it hardly feels like summer has started. Hello? Summer? I'm waiting...

But let's talk about something else.

I had a four day weekend! It was mostly pretty relaxing. I even played a video game, which I rarely do. Made my husband happy. He keeps hoping I'll turn into a gamer. Probably not going to happen. But once in a while I get in the mood to play for a bit. I'm done now.

I went to a yoga class last week! I was trying to go to lunch time yoga for a while it the winter, but it was hard to get there as often as I liked, and they stopped the classes at the end of March which was a little disappointing. The schedule at the fitness studio where I go to Zumba has changed for the summer. There are no TRX classes that are convenient for me at the moment. Zumba has been moved to 6:35 which is a little late, since I don't like to eat before hand. But there's yoga at 5:35 on Monday & Wednesday, which I think might be a nice change for the summer.

Last week - Thursday I think it was - there was a tornado warning, ever so briefly. We never have those around here, and it was downgraded so quickly that I wondered if it was a mistake. Anyway, I took down all the bird feeders - two had been knocked down anyway, not sure what happened, but I figured I'd take them down in case we got a storm. I just put them up again yesterday and things were pretty busy at the feeders this afternoon, including... 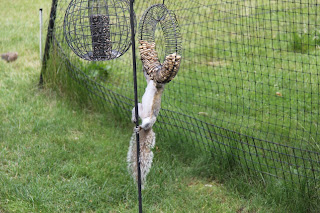 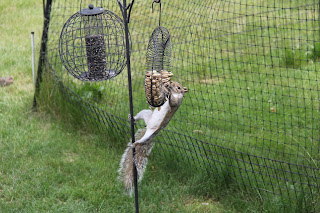 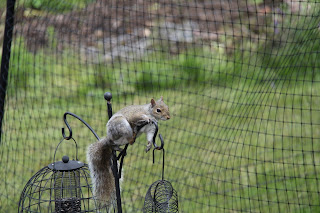 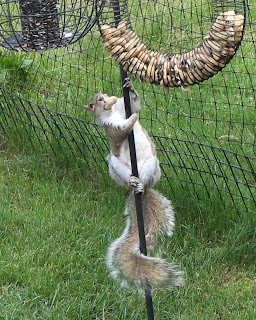 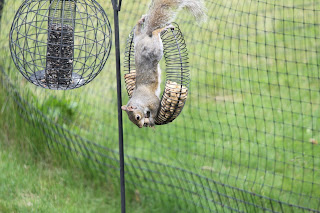 ﻿
Is that not the cutest thing? For some reason I love that  first one, even though you can't see his head. I had great fun watching, he came back about 3 times.

I think this is the biggest squirrel I've ever seen around here. For a few years we had some little ones. They would sit up on the fence and scold us. They disappeared - a lot of cats around here these days, so that could be why. Hope this one stays safe.

And there were birds of course. 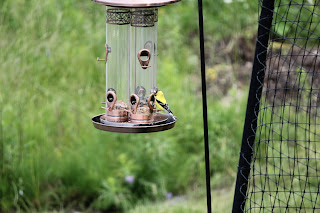 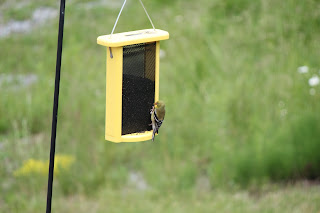 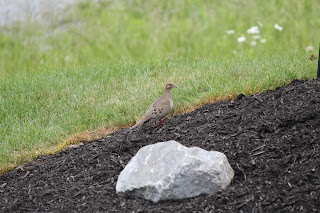 The weather actually cleared up this afternoon and we had a bit of sun. The rest of the week is looking iffy.


01: Kathy Smith Personal Trainer Sculpting
03: Zumba
05: Jackie Warner One On One UB + YD Moon Salutations Flow
06: Jackie Warner One On One LB
08: Kathy Smith Lift Weights to Lose Weight 2
10: Pulling weeds in the garden
12: Jackie Warner 30 Day Fast Start Pyramid Training
13: Pulling weeds in the garden
14: TRX Class
16: Planting my garden I won't be able to move tomorrow...
17: Zumba
18: Planting tomatoes
19: Jackie Warner Power Circuit UB+LB & Pulling weeds in the garden because the weather is too fabulous to stay indoors
24: Finish planting containers
26: Yoga @ Baila Fitness
28: Jackie Warner Power Circuit UB+LB
Things kind of petered off at the end of the month. Lots of gardening. Then gloomy weather which makes me want to curl up in my comfy chair and stay there.
For July:
I'm hoping to get to yoga at least once a week, twice would be even better.
I'm going to try to be better about tracking food, to see if it makes a difference. I feel like I keep repeating this one, but I also think it needs to be done.
Happy Canada Day!
Seriously cannot believe it is July already.

I love the first one *because* you can't see his head.

Im joining you in making YOGA a priority.
shall we nag each other? ;-)

Hope you had a great Canada day! And you have a great attitude about squirrels that raid bird feeders; we spent extra $$ on a kind they can't get into. PLENTY of fat squirrels in our yard so guess neighborhood cats are not all that great as squirrel-scaring!

Mary Anne - Yes, that is likely it. Squirrel headfirst into the peanuts. :)

Crabby - I like squirrels and chipmunks, and so far they haven't caused an issue at the feeders - I'm happy to feed them peanuts! I'm not so fond of the grackles who come and clean out my feeders and knock some of the feeders to the ground (at least, I'm pretty sure it's the grackles).