Of course, the best things in my garden are not plants...They are Fabulous Felines!

This seems to be Fred's favourite spot. I've seen him curled up and napping here on sunny afternoons. See that plant next to him, with the pale purple flowers? That is a Catmint. And the cats are not at all interested in it, so don't let anyone tell you that Catmint is the same as Catnip. 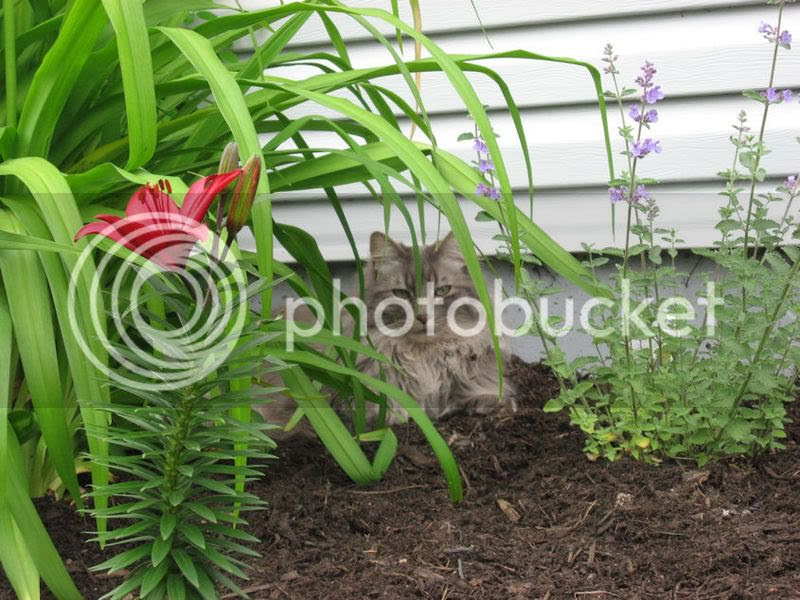 I've noticed in the evenings, Fred likes to sit out by this tree. I think he enjoys the view of the wild outside the fence; he is usually looking off in the direction of the empty lots and the trees. Most evenings, if I'm out there at the right time, I'll see our herd of deer out there. 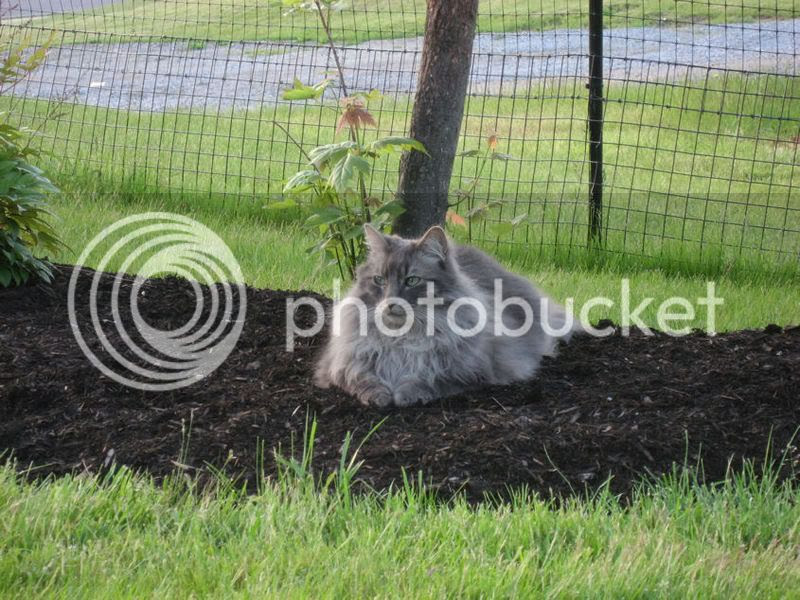 George likes to try out different spots. Though, he does like to crawl in under the bush by the gate. The bush has grown in so much it's hard to get a picture of him in there now. It's actually hard to see him when he's in there (You can see a picture from last year here). P.S. Did you notice in this first photo, you can see Fred in the background, in his favourite snoozing spot? 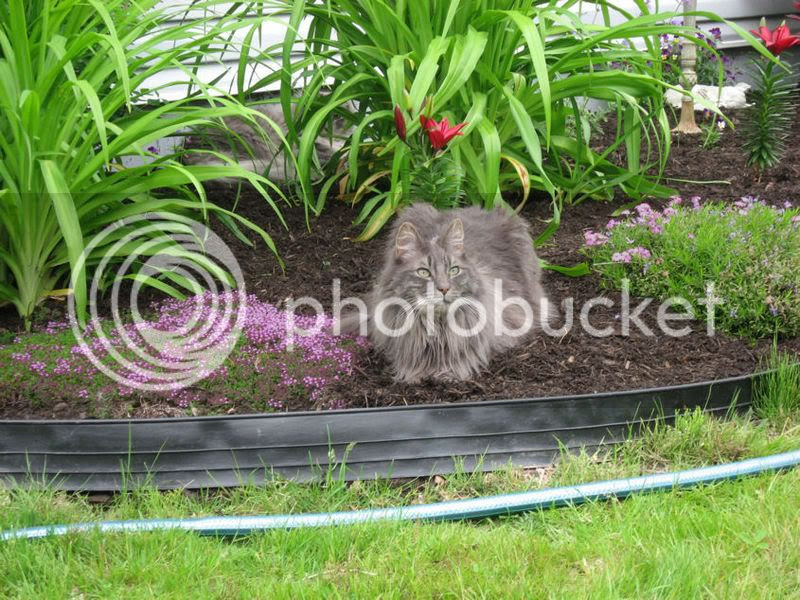 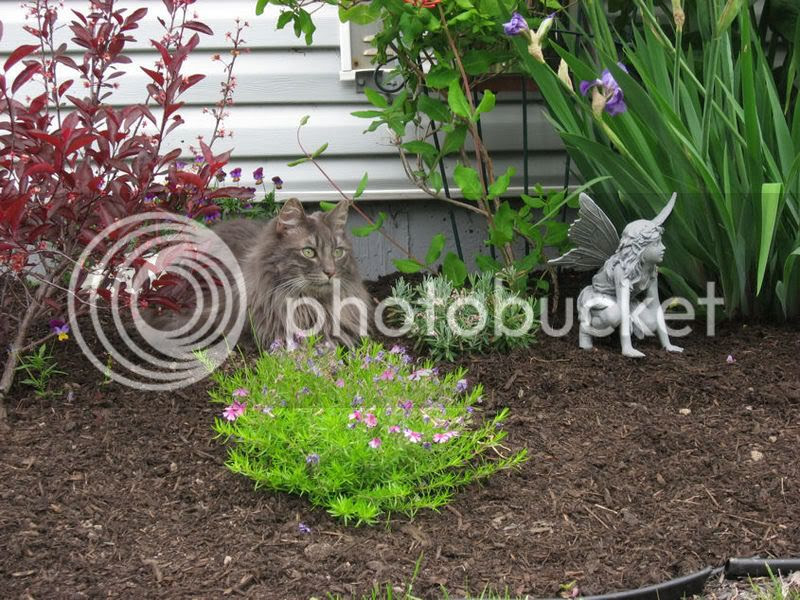 This is Fred discovering the new catnip plant I got on my trip to the nursery on Sunday. He made a beeline for it, soon after I had set the tray on the ground. It was funny to watch him sniffing around all the plants until he found the right one. Good nose on that cat. He loves his catnip. 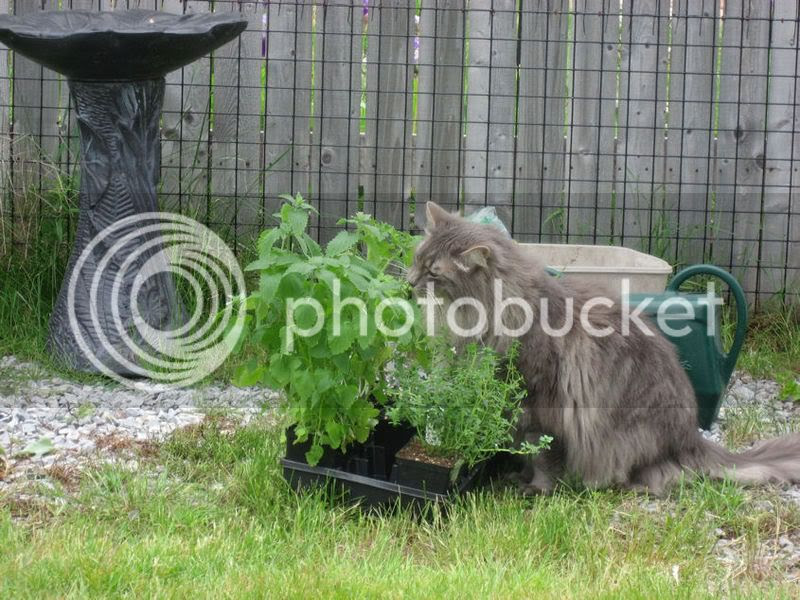 This is Fred going in for a taste test. 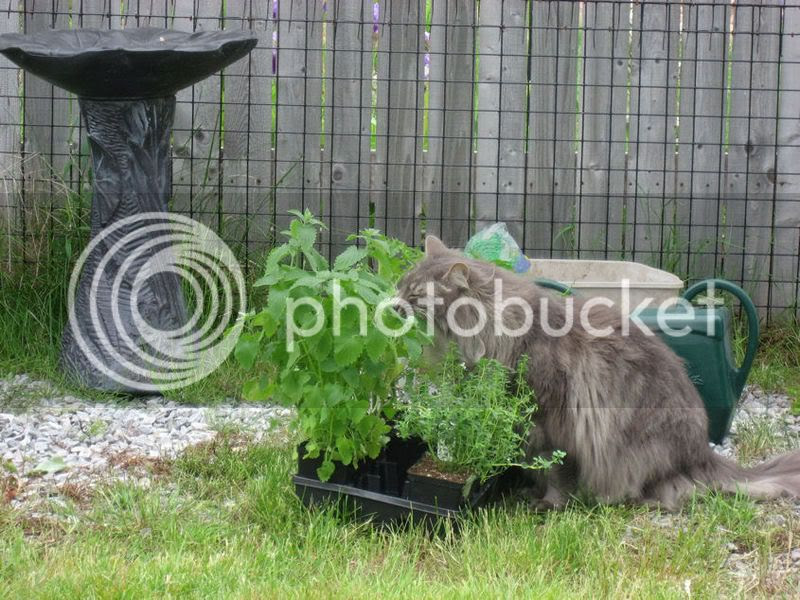 Who? Me? I am just a Fabulous Feline, minding my own business. Nothing to see here. 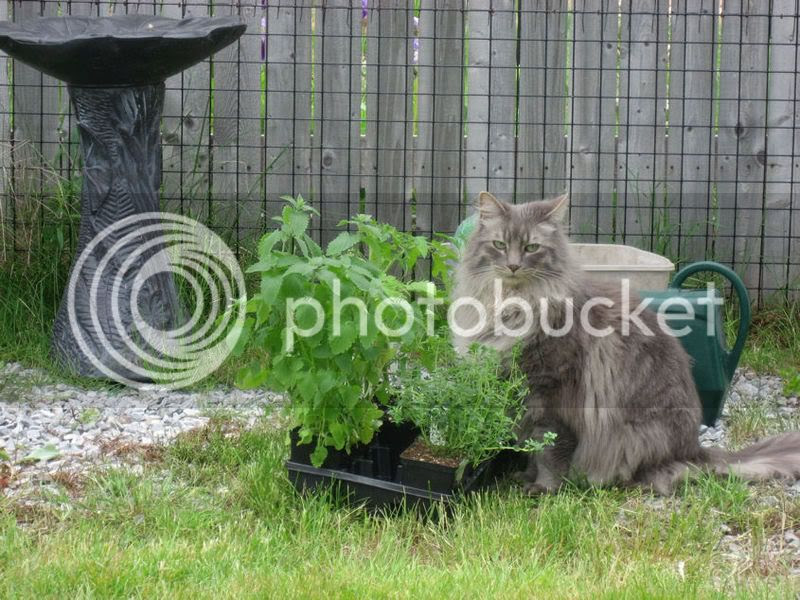 Later on, I was working on my vegetable garden, putting in the new plants. The tray was sitting behind me, and Husband was sitting on the ground chatting with me (rare event - Husband does not often venture outside, he must have missed me, what with me spending so much time out in the yard lately). George came along and took his own little nibble of the catnip plant, but I didn't realize until Husband said something. The camera was out of my reach, and by the time I got it, George had moved on. But both cats had nibbled on the plant before it even got in the ground.

A few years back, I had a pot of catnip on the deck all summer. It produced lots of little seeds and we ended up with quite a crop of catnip growing under our deck for the next couple of years. Last year I tried digging some up and moving it directly to the garden, but the cats pulled it out before it had a chance to establish any roots.

I had three catnip plants in the garden last year, bought at the nursery, and I'd hoped they would spread, but they never had a chance to go to seed. Fred & George kept them well trimmed. I was hoping to get three again this year, but there was only one left.

I have a pot with catnip growing on my kitchen windowsill, started from seed. So that will end up in the garden eventually. Plus, I found one growing in the gravel by the deck last night, so I dug it up and transferred it to a little container. It is now on the windowsill as well. I'll give it some time to get established and move it to the garden as well. 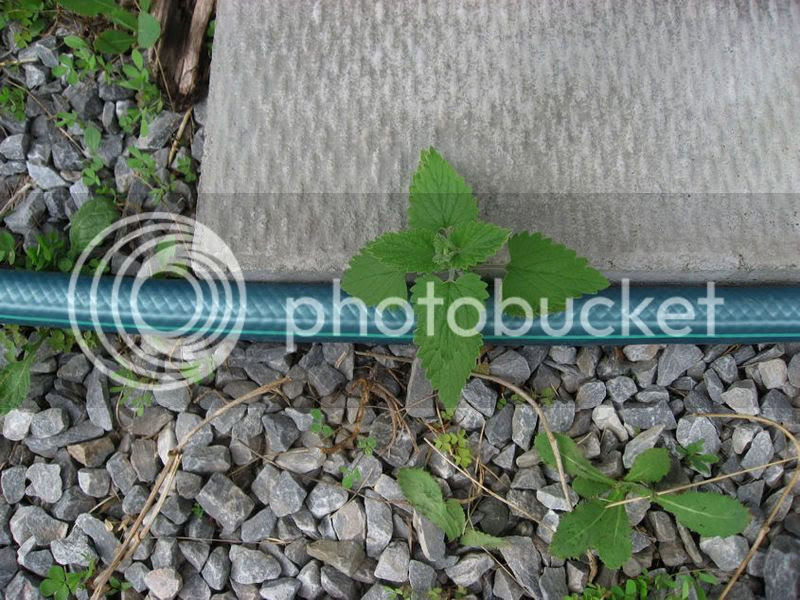 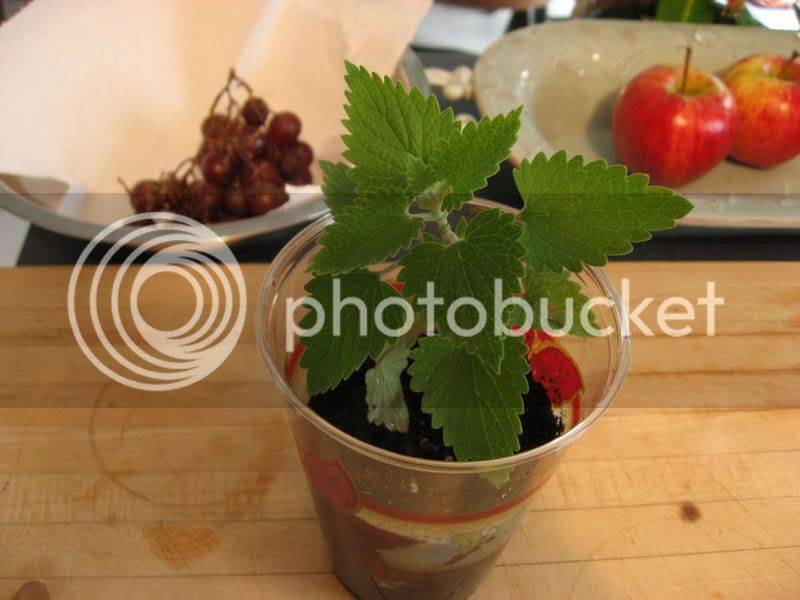 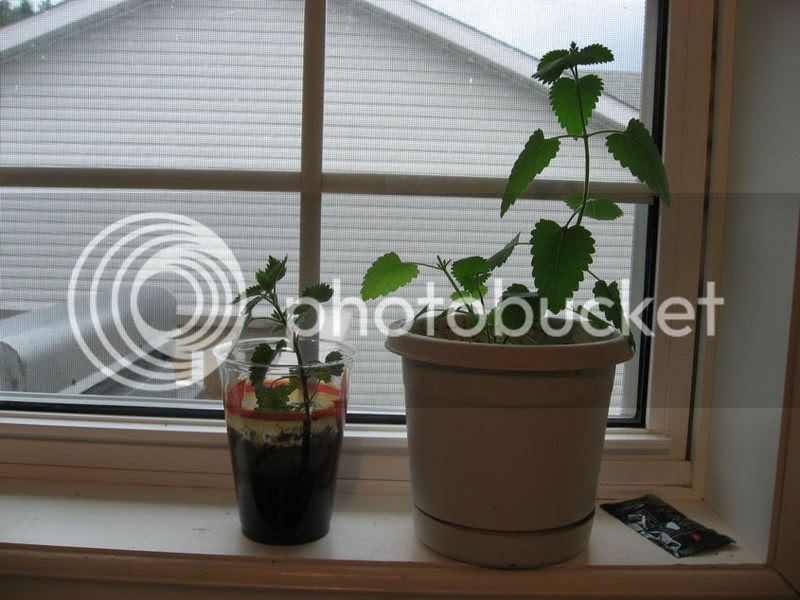 My garden, like everything else, seems to be designed with my cats in mind. :)

Workout: Burn & Firm Pilates DVD
Posted by JavaChick at 9:47 AM

Gardening and cats - you can't go wrong!
Great photos. Your cats are just so darned photogenic!

Thanks Bag Lady. I just adore these cats so much, and I'm really enjoying hanging out in the yard with them to keep me company. They seem to like it too!

Your cats looks so content! Especially the one by the little crouching fairy statue.

Fred is so cool! I have a cat(Ragdoll) his name is Jackson. He is afraid of the outdoors :).

Sagan - George generally is a very contented cat. Husband calls him our "happy and well adjusted" cat. He does like lots of attention though, so if he feels that he has not been getting enough cuddles you will know it.

Mark - Thanks! I have to admit, I think Fred is a very beautiful cat. I wish he was more afraid of outside though - he definitely has a wanderlust and thinks he wants to go out and explore the world. He puts up with his fenced in yard, but only because he has no choice.

Man, now I have to add catnip to my list...I have always meant to buy it, but forget. Kitty is indoor guy though, so it will be safe in my garden! :) Maybe I'll pot some on the deck for him to nibble at. He's funny to watch when he's high.

Your right... they are the best living ornaments around!!! :)