Day 13 on the Beck plan deals with cravings - learning to resist them.

Dr. Beck points out that if we actually resist our cravings for a period of time, they will diminish. I agree with this because I have experienced it. The trick being that you must have the will power to resist those cravings in the beginning, in order to get to the point where the cravings are not such a big deal. So you need strategies to build up your "resistance muscle."

This chapter contains exercises and suggestions to be put to use; the next time I experience a craving I need to Measure it. How long did the craving last? How much discomfort did it cause me? What techniques did I try to fight off the craving and how did they work? It also list some suggestions for distracting yourself from cravings.

So that is an exercise for the next time I am hit by a killer craving.

And lastly, today's photos inspired by the dill growing in my garden.

I am actually surprised that the plants are not bigger than they are. Not sure if it is because they were planted late? Or because there was not enough rain early in the season? 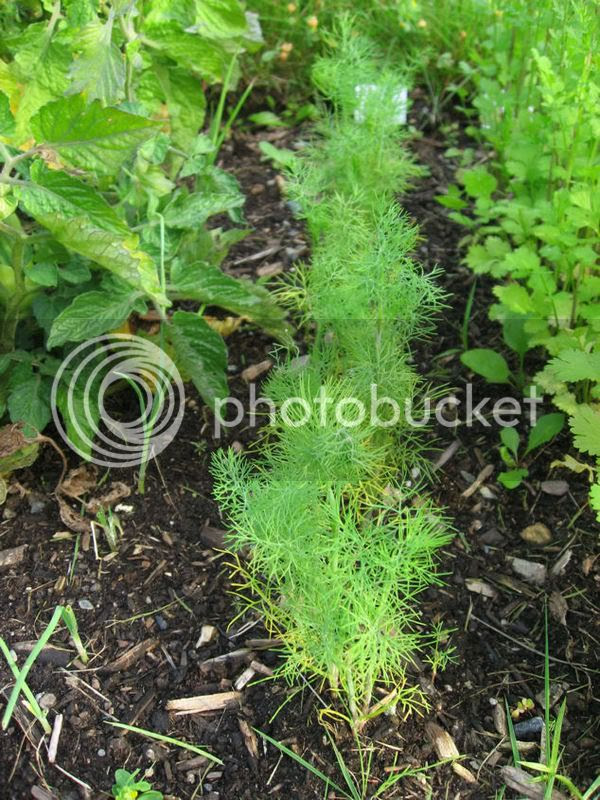 But I don't need a lot, only small bunches at a time to be tossed in salads. 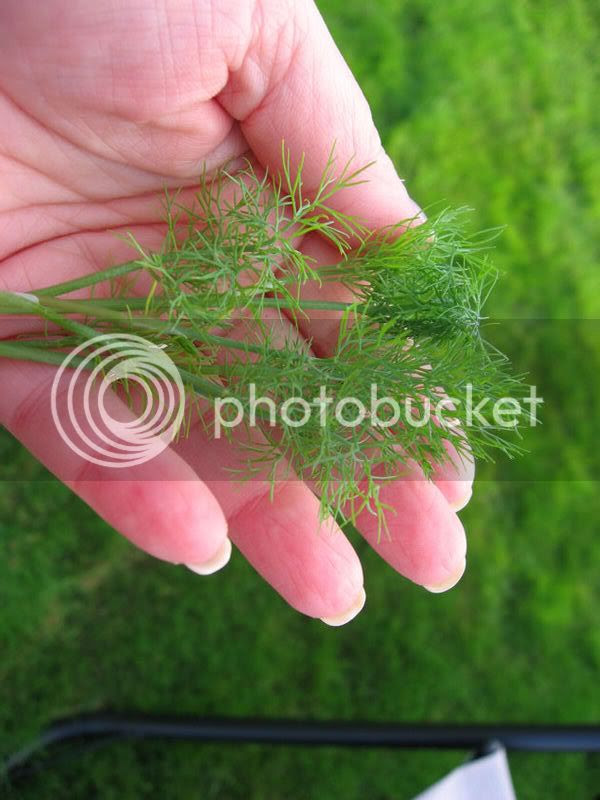 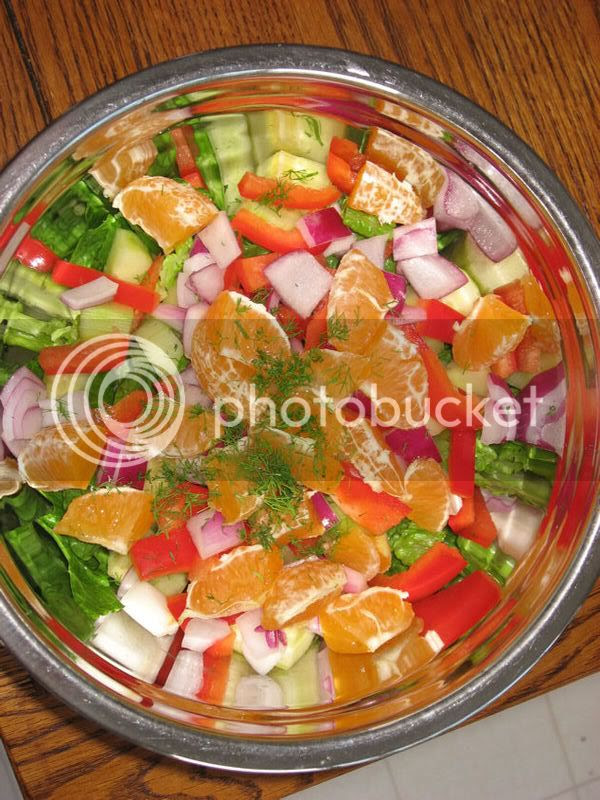 I do love a colourful salad! Isn't it pretty? 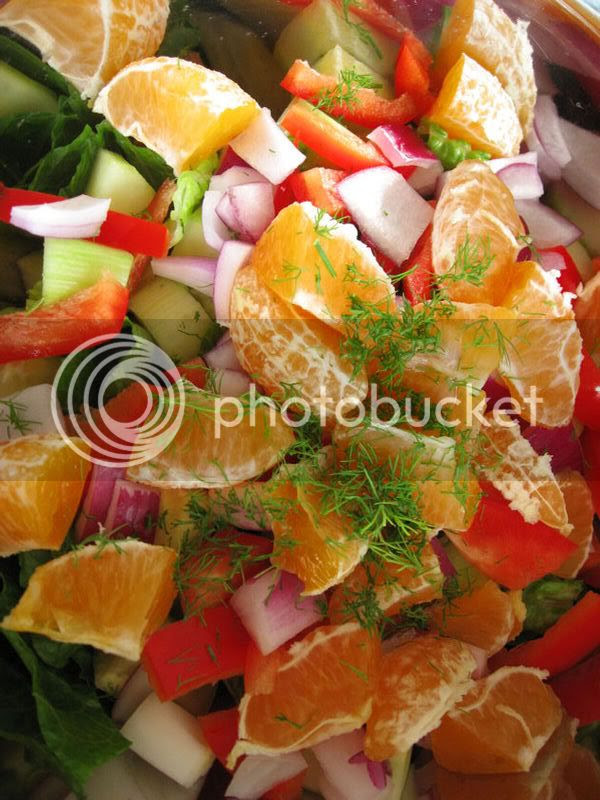 The salad was finished off with some feta & Kalamata olives, lemon juice, olive oil and a bit of salt & pepper. We had it with BBQ'd chicken. 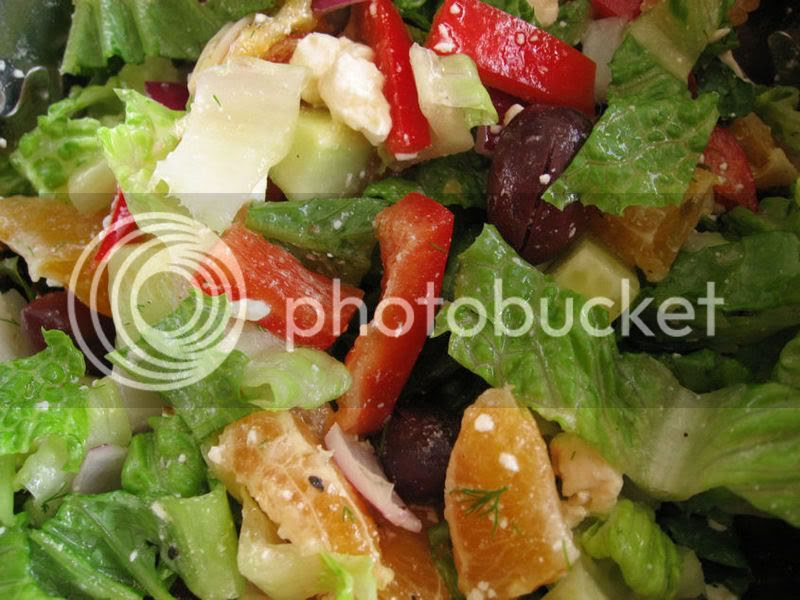 A quick comment re: healthy food being expensive. One night a couple weeks ago after being in a hospital all day I was craving A&W. Dinner for the two of us was $18!! I could easily make a dinner (with enough leftovers for the next day) with that money! I do think sometimes eating at a restaurant, the healthy choices are more expensive then the regular burger and fries etc... but making food at home is WAY cheaper.

On another note, I love hearing your comments about the Beck Diet, I bought the book (haven't started reading it yet, too busy, but will soon) and am quite excited!

Wow, I want to come to your house to eat - all the time! Everytime you post a picture of what you've made for supper, I start salivating!

And I don't understand why your dill is so small, either. It always grows like a weed here - maybe it really likes the clay/gumbo that my garden is comprised of!

I do think it is WAY expensive (or at least it is how Im doing it---which might say something about me) but I cling to the perhaps silly notion of it all saving money in the end.
in medical bills if nothing else.

Christy - I'm looking forward to hearing your thoughts on the Beck Diet as well. And I agree with you on eating out vs. cooking at home; cooking a healthy meal does not need to be expensive!

Bag Lady - Thanks for the compliment. I am a pretty picky eater and I like interesting food! Though, of course, I am more likely to take pictures of the pretty stuff. :)

MizFit - I think you hit the nail on the head with the reference to "how you do it." If you've got the money to spend, it can certainly make it easier, but I don't think it HAS to be expensive. And the mind set that you are saving on medical bills by taking care of yourself is a good way to look at it.

Man, your food always looks so freaking colorful and lovely! I wish DBF would eat fruit so I could put it in our meals and make them fun and lovely too. :)

It's funny that your post today is about cravings. I just made a comment on my own blog that once I got past the three day hump (that's the trick for me personally) I've had no trouble staying on plan...mostly because I'm not craving any candy or crap. It's true.

That is the most beautiful food dish I have ever seen! I've been trying so hard lately to make dinners with as many colors in them as possible.

My husband only makes brown and white things. :-(

That salad is beautiful! It looks so yummy.

BionicWoman - it's so true! If you can manage to stay off the junk food long enough, the cravings go away. I remember a time (many years ago, I don't want to say how many) where I was eating McDonald's several times a week and always craving more, but I stopped cold turkey and haven't eaten at McDonald's in years...Have absolutely no desire to!

Melissa - I just can get interested in eating boring food! I like lots of different flavours and textures. Fortunately my husband is happy to eat that way as well.

Erin - Yes, it was very yummy!

I LOVE the look of that salad!

Now those pictures look soooo tasty! Eating period these days just seems so expensive. I used to think eating healthy was more expensive , but now it seems as though every where you go you are paying more for something than you used to...