Get This Garden Started, Part II

My Mom and I spent Sunday afternoon shopping and had a lot of fun. It was a beautiful day to be out and about. Unfortunately, toward late afternoon I started not feeling well. I tried to keep on trucking though, because I didn’t want to spoil anyone’s weekend. We BBQ’d for supper and then went for a family walk around the neighborhood. Unfortunately by later in the evening I was feeling worse and it became pretty noticeable to everyone else.

I went off to bed and woke up on Monday still not feeling great. My parents and brother left after breakfast and I spent most of the day on the couch catching up on Lost. I’ve been recording the episodes but just started watching recently; I find with Lost it’s good to be able to watch it all at once. Made for good sickie day activity.

However, it was pretty much killing me to be sitting inside on such a beautiful day, so later in the afternoon I decided I was feeling well enough to go out and do a bit of gardening.

I was accompanied by my usual feline garden buddies. 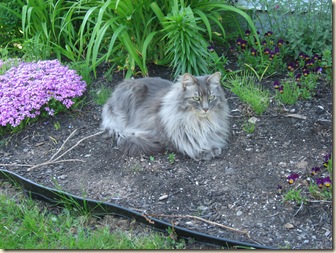 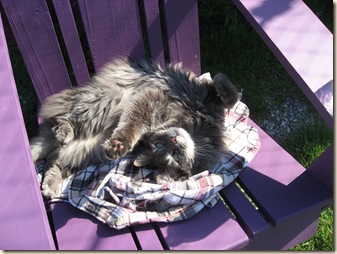 How happy does he look? I think I should send that picture to my Dad, to let him know that his chairs are being enjoyed.

I spent the afternoon weeding my little vegetable plot, getting it ready for planting.

I actually did one spot, probably 4 weeks ago now and planted some bunching onions which are coming along quite nicely. 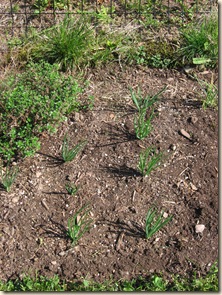 But the rest still had to be done. 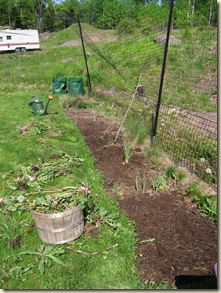 The other bits of green that you can see sticking up are the garlic plants that I put in last year. It’s spread out in a few spots, throughout the garden and it’s looking like I should have a pretty good crop this fall. 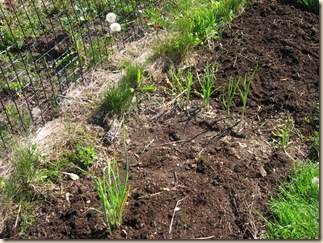 Yesterday, feeling much better, I went out and did some planting. 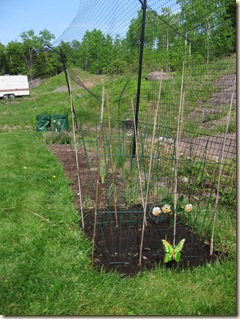 I also planted some peas along the back edge of this flower bed. 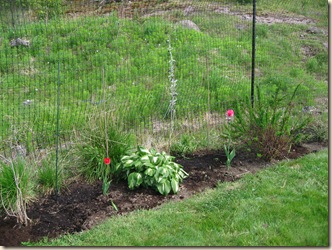 The soil is not good in this bed. I dumped on what I had left of a bag of compost and a bit of soil that I had; it could probably use more but I don’t have any at the moment. But pea plants are good for the soil, or so I’ve heard, and I still have quite a few seeds that need to be used. So I decided to plant some there. Worse case – they don’t grow; best case – I end up with more peas. Seemed like it was worth a shot.

Back to the subject of TV for a moment – I just finished watching this weeks episode of Glee. The first few episodes when Glee came back this spring just didn’t seem to have the same ‘Oomph’ as the first half of the season. But the past two episode have really knocked it out of the park. Glee is back!

Posted by JavaChick at 8:23 PM

I'm afraid I don't watch any of the programs you mentioned, but do enjoy seeing the garden pictures! :)
(and the kitty pictures, too!)

Awwww....I've been way behind on my reading and now getting all caught up I'm happy to see your lovely gardens coming along!! And I'm in LOVE with the chairs from your Dad. If I knew I'd have somewhere to use them when I move, I'd try to buy some from him!

Bag Lady - You might enjoy Glee, it involves lots of music. You know, if you actually had time to watch TV.

Jaime - That would be a long way to haul wooden garden chairs! But they are pretty nifty. I will enjoy them, that's for sure.