When I was planting in the flower bed by the driveway this spring, I kept reminding myself that things would fill out as time went on. I fought the urge to cram in more plants. A little time makes a big difference.

This photo was taken early in June, after the planting was done and the beds had been mulched. 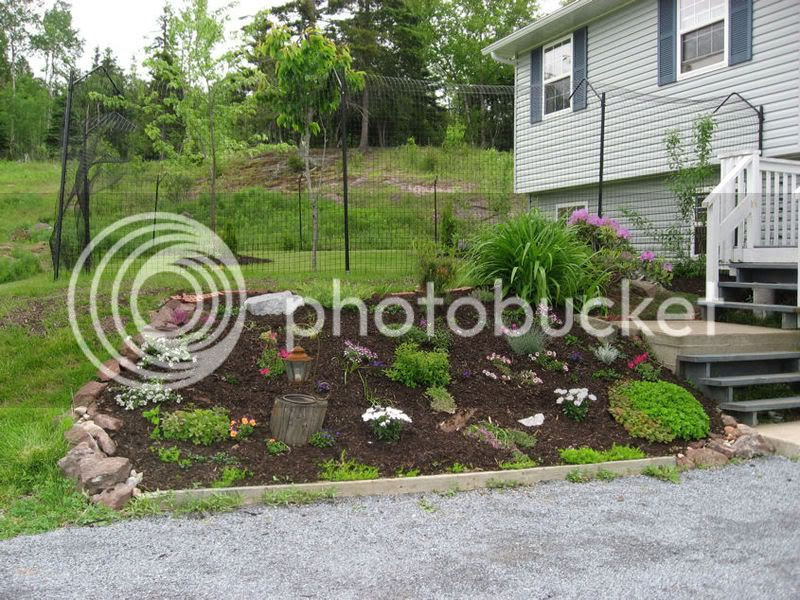 This photo was taken yesterday. 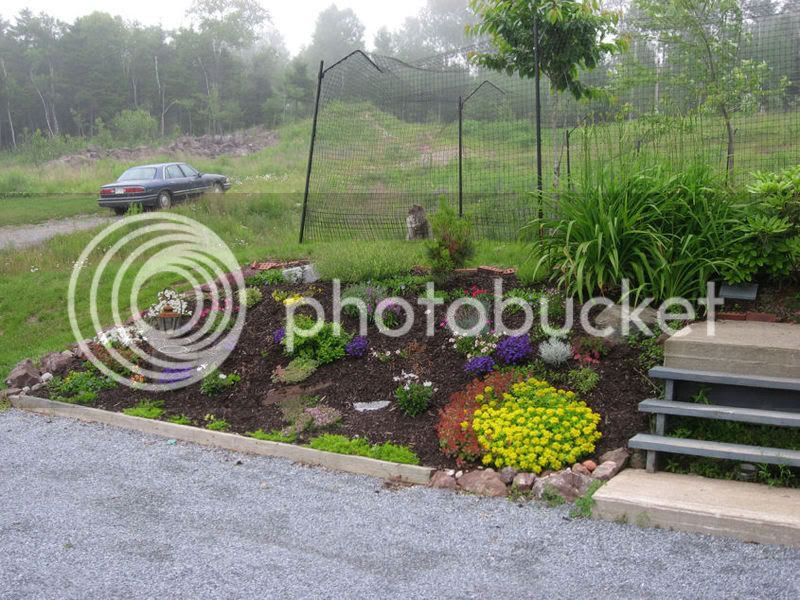 I have had a couple of casualties, I think from the deer running through and trampling things. And as you can see, they stop for snacks as they are passing through. 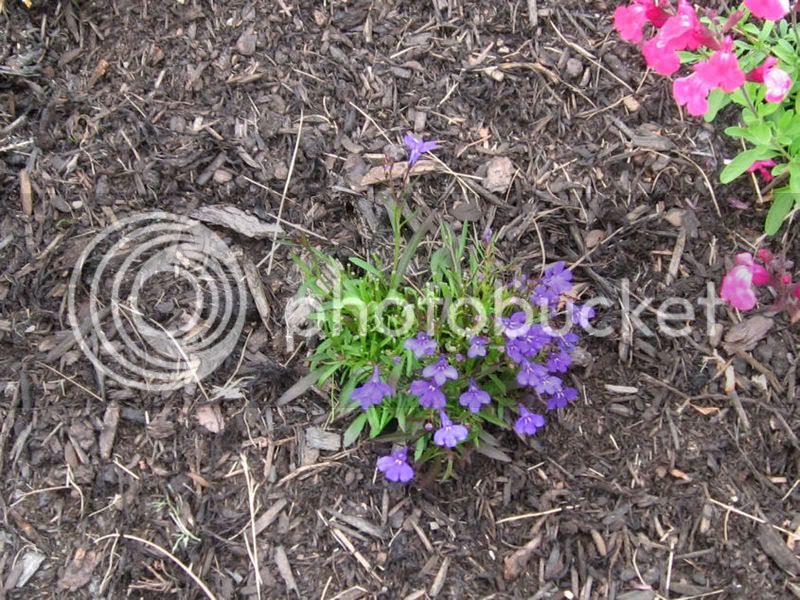 If you look at the top photo, you can see a little green bush (Spirea) right in the middle of this flower bed. It should have lots of flowers like this: 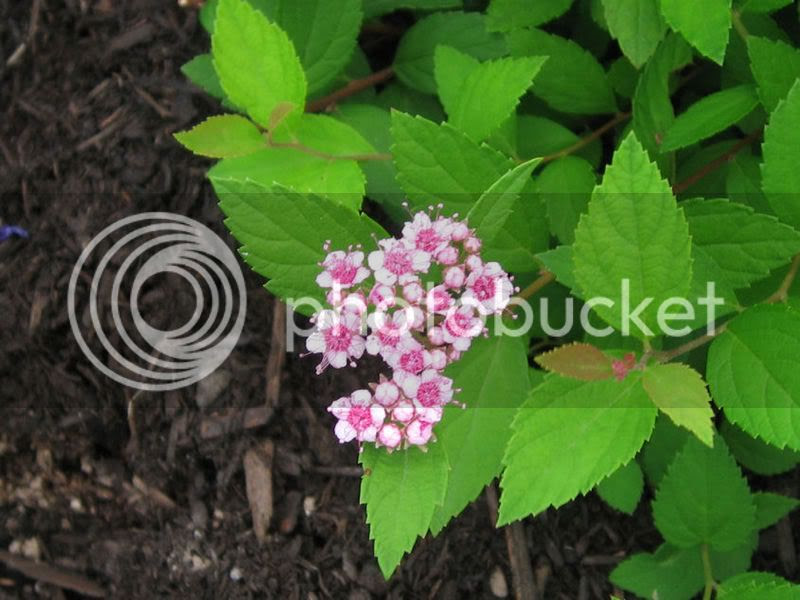 But an examination of the bush showed that it's been deer food as well, so it just has that one little bunch of blossoms. I think I'm going to have to move it. It's probably not in a good spot anyway. Spirea bushes can grow to be quite large. This bush is from a little cutting given to me by my mother-in-law, not long after we had moved into our house. At the time I didn't know what I was going to do with any of the gardens, so I put it there. I have been thinking for the past couple of years that I should move it, just not sure where.

The plant with the blue flowers here is called periwinkle (if I'm remembering correctly), and the one with the yellow is Creeping Jenny. 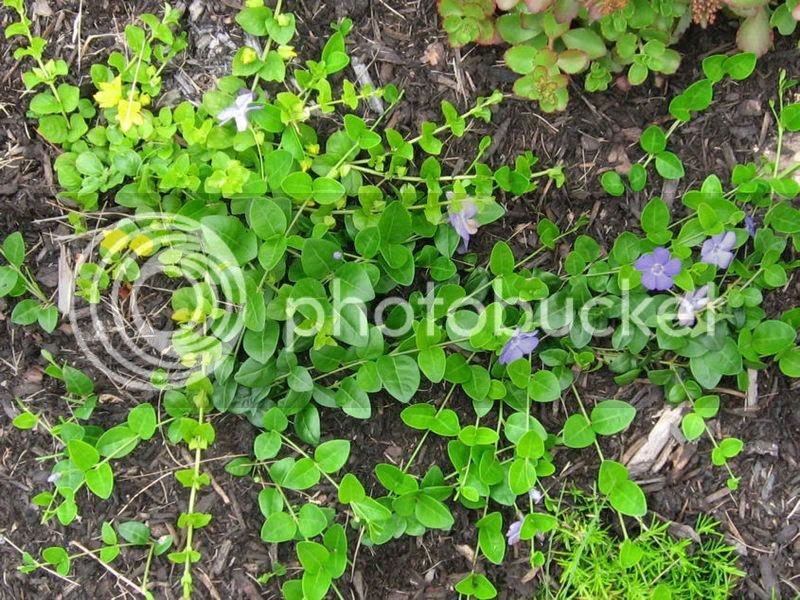 The Creeping Jenny I got at an end of season sale at a garden center a couple of years ago. It wasn't looking too lively when I planted it, but it has survived. It hasn't spread much though. I put a couple little periwinkle plants beside it this year and they spread more than I expected. Hopefully little Jenny won't get crowded out.

I really like this stuff and I wish that it would spread more: 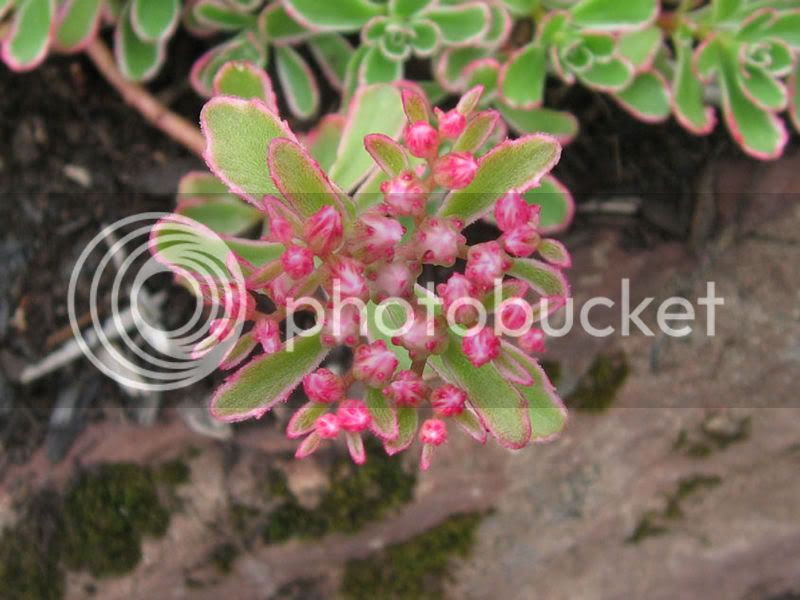 It is a Sedum, though I forget the name of the variety. Those buds will open into pretty pink flowers.

And two more varieties of Sedum: 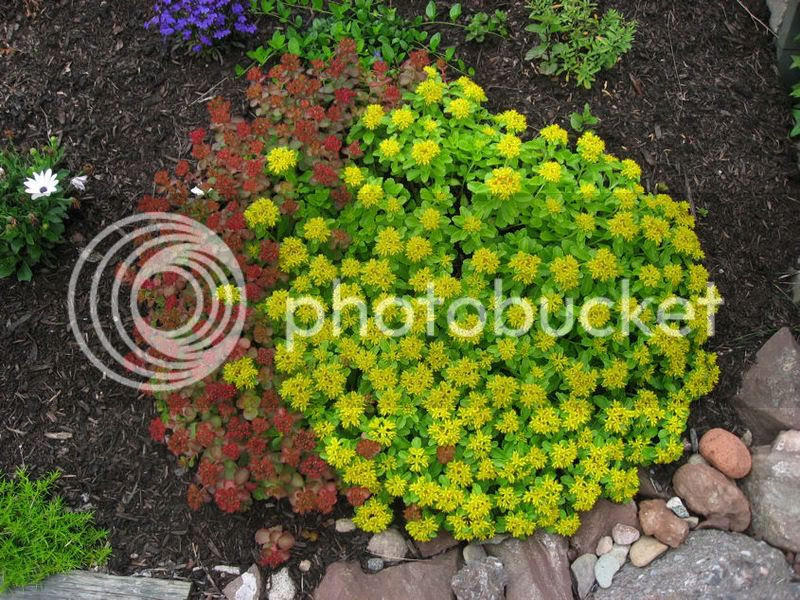 The yellow one kept migrating into my yard from one of my neighbors - she has it all over the place. I think I've said before, when I first moved in there wasn't much in any of the gardens in our yard. I was a novice gardener and it took me a few years to even figure out what I wanted to do. But, I wanted something in the garden, so when I would find these plants popping up in my yard, I would dig them up and plant them in the garden.

I'm thinking I may have to dig this one out though - or maybe cut it back? I'm afraid it is going to keep getting bigger every year and take over. It certainly has grown enough to push back the other Sedum that's right next to it.

That one is called Dragon's Blood. It will bloom with deep pink flowers, and then the plant will turn dark red in the fall. It adds some colour in the fall when things are dying off, which is nice.

And last for today: 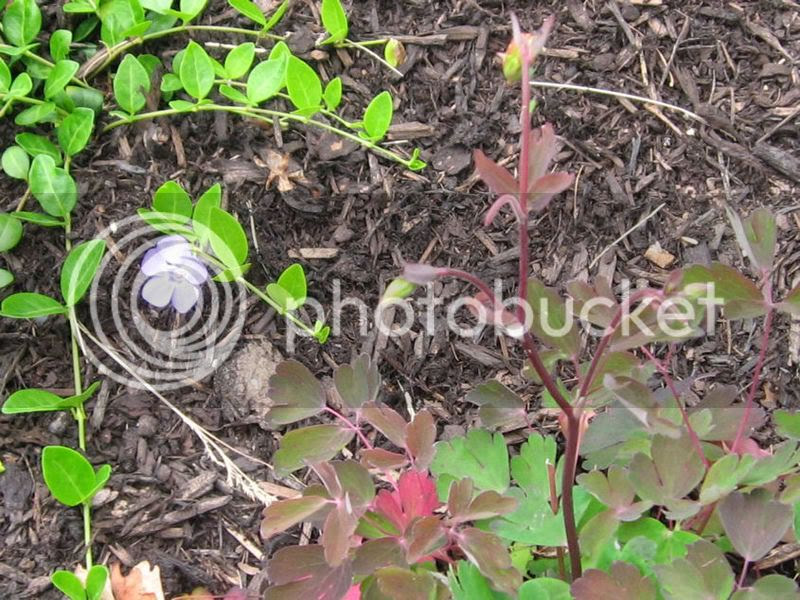 I planted some columbines this year. They grow in the gardens at my parents place, and I thought I'd like to have some here. I'm seeing buds now, so hoping for flowers soon!
Posted by JavaChick at 9:42 PM

Your flowers are looking great! I should try to make my flowerbed look a little more like yours, rather than the overgrown jungle I have out there now. Really need to thin some of my perennials.

Oooh - your garden is just gorgeous! Columbines are my fave:) Aren't they edible?

I love your garden!
It's not just the grass that's always greener on the other side of the fence...

Such beautiful pictures..the flowers are really looking beautiful-and such vibrant colors, too. You did a great job, must have a green thumb!