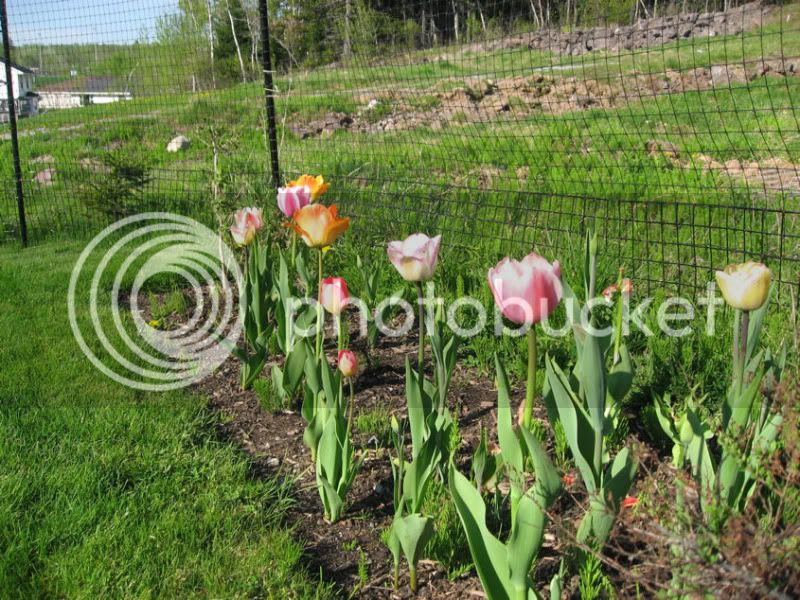 The weather has been getting warmer and warmer all week. Today it felt like summer. So beautiful out! Husband actually had the day off, lucky duck! He and the cats had a very enjoyable day - he told me the cats spent most of the day snoozing in the garden. If we'd both been at work, they would have been stuck in the house.

Shortly after I got home, Husband left. He's off to play computer games with his friends for the evening. So I was left to my own devices. 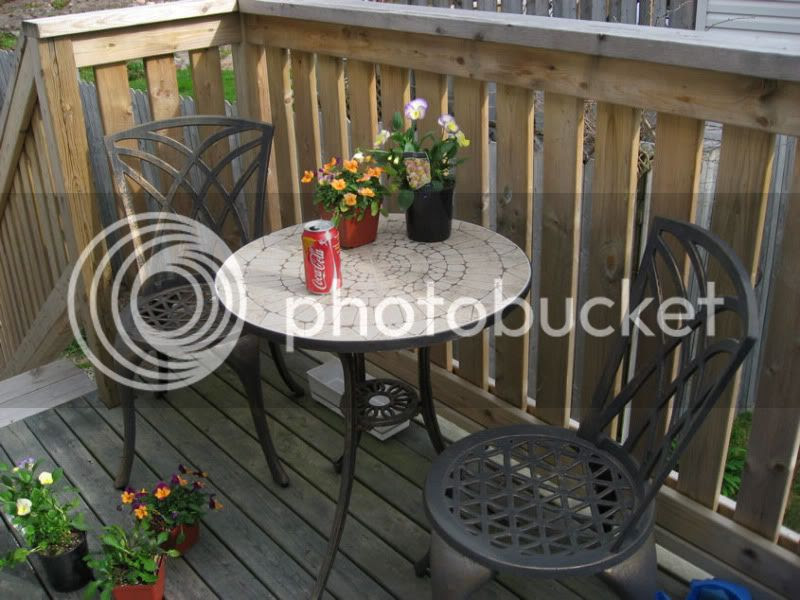 Some people crack a cold beer on a sunny Friday, I reach for a Coke.

I tried something new for dinner tonight. 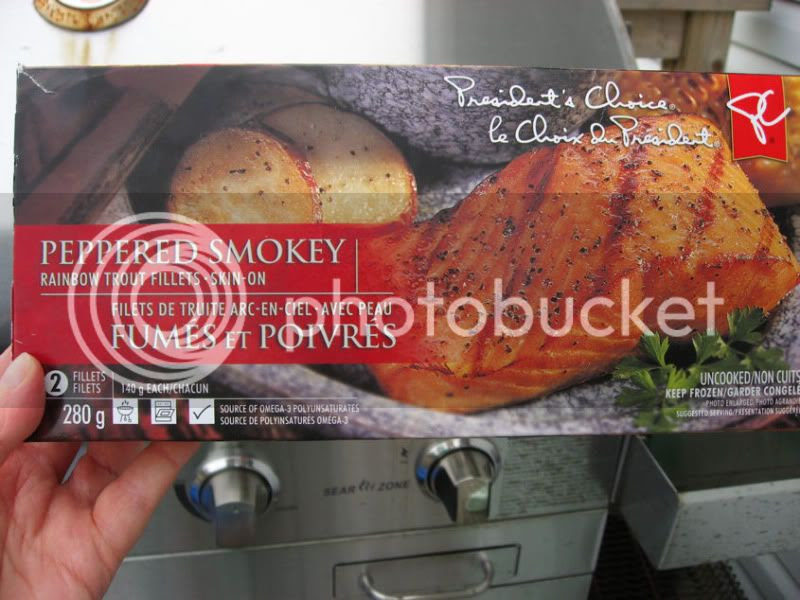 Husband was not exactly thrilled when I brought this home from the store, but I figured I could have this while he was having steak (which I'm not crazy about). Or, on a night like tonight when I'm on my own. 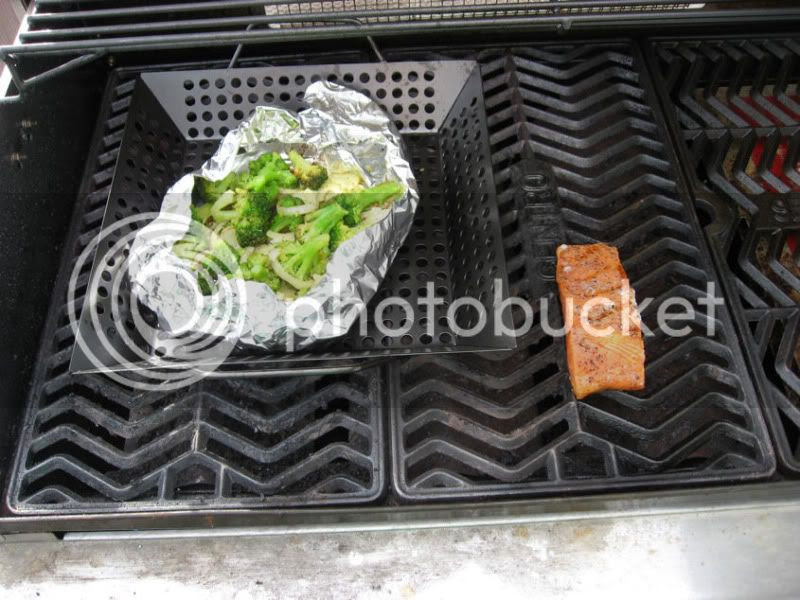 We had no fresh produce left in the house. I thought about stopping at the store after work, but I really just wanted to get home. We did have some frozen broccoli in the the freezer, so I threw it in some foil with a sliced onion and topped it with some Lemon Pepper Seasoning and olive oil.

I got a little carried away by the beautful day and was picturing a relaxing dinner sitting out on the deck.

I forgot about the cats.

They had disappeared out into the yard soon after I got home, but eventually George showed up in the kitchen, complaining at being inside while I was out on the deck. So I put him in his harness and brought him out with me. 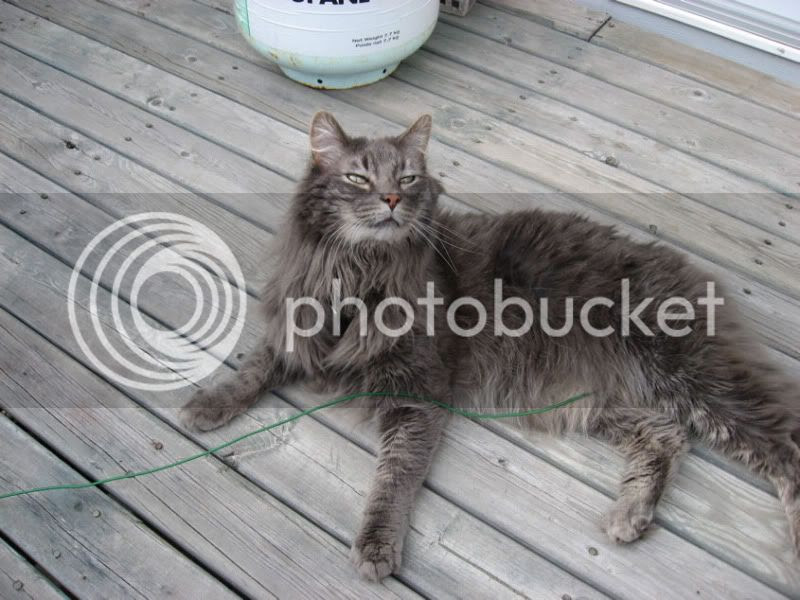 He spent a lot of time sniffing the air; I think he could smell my trout cooking. 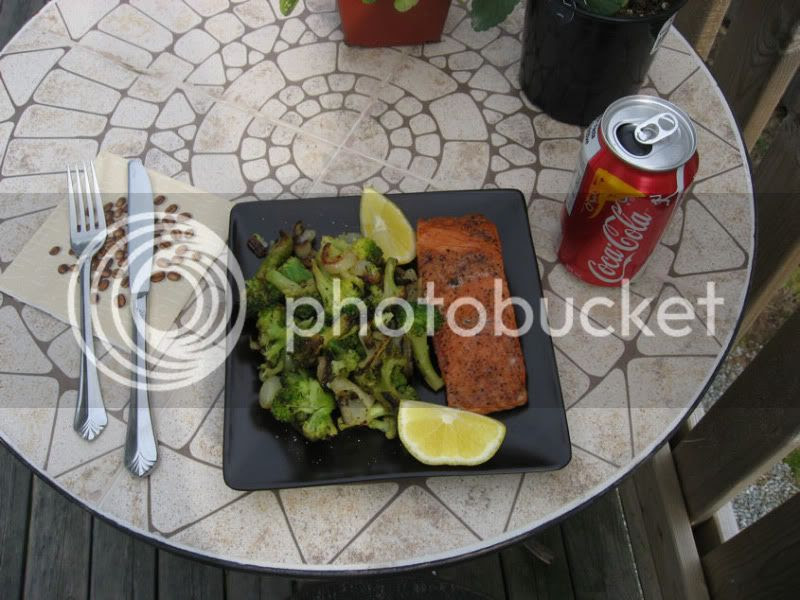 Everything got a squeeze of lemon. The trout smelled and tasted very much like my favorite smoked salmon (from Lord's Seafood in the Saint John City Market), so I was happy.

Of course, as soon as I put down my plate, Fred showed up at the patio door and I had to bring him out as well. Both cats got bits of my trout and for a while we were all happy.

However, as soon as Fred decided he'd had enough of my dinner, he got restless... 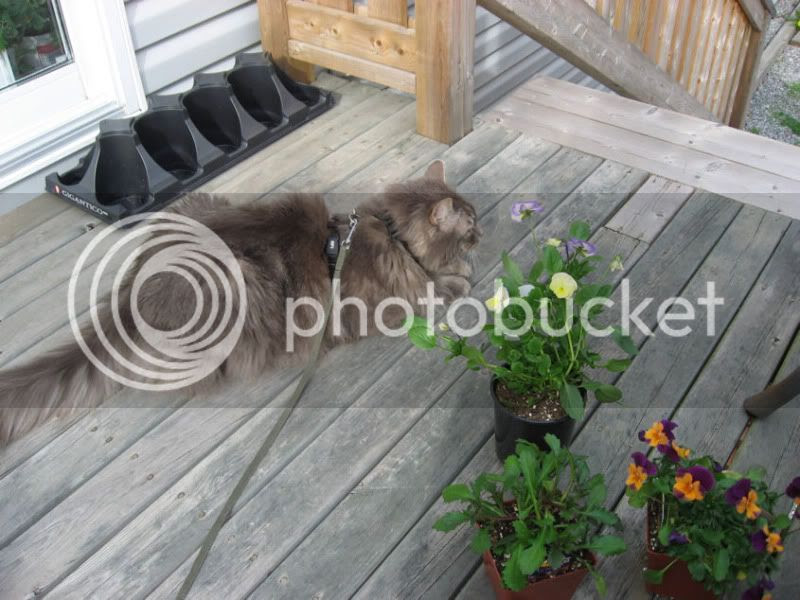 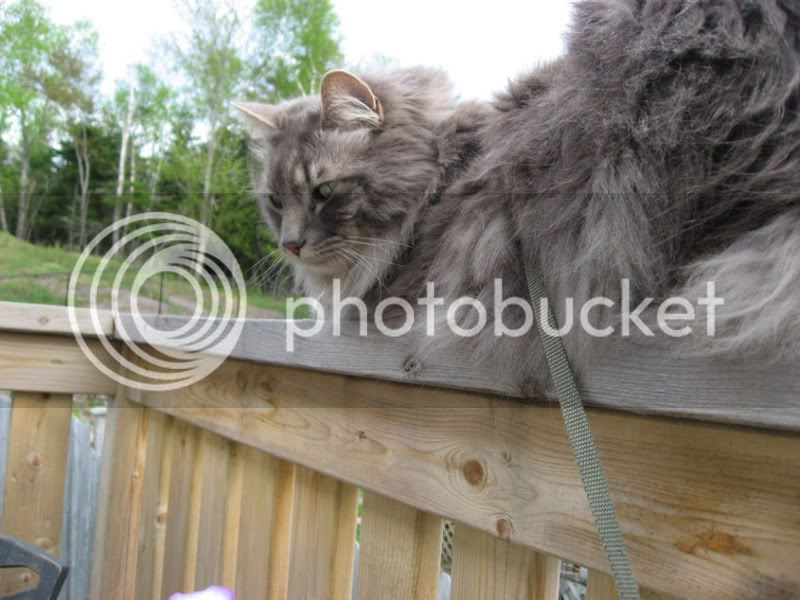 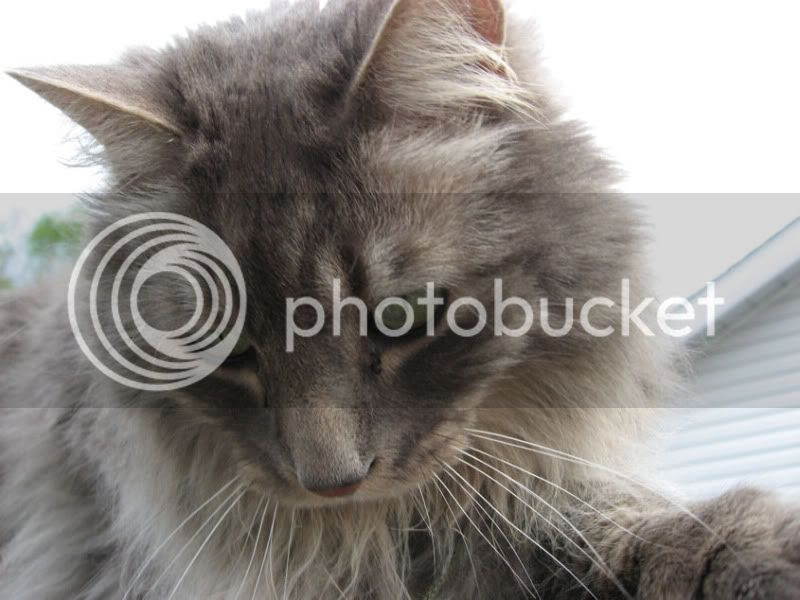 He does not like being confined to the deck. Sometimes he will give in and enjoy it, but other times he'll roam all around. You have to watch him because he can wiggle out of his harness very quickly. So the rest of my dinner was not so relaxing. Eventually I had to give up and we all went back into the house.

Still, it was a satisfying dinner. Just what I needed. As I headed off to do the dishes I got distracted by dessert... 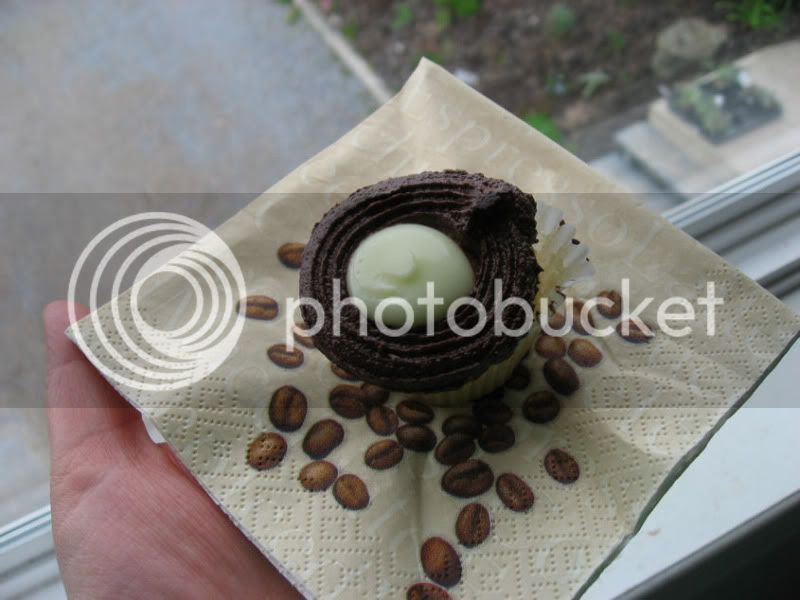 Not that I needed more sugar after drinking a can of Coke, but it was such a wee little dessert!

Then I did the dishes. And then I went out to work in my gardens. I'm not exactly sure what time I went outside, but I must have been out there for 2 - 2 1/2 hours. It was so lovely out, even the breeze was warm.

Mystery in the garden

As I was walking back and forth, surveying the situation, trying to decide what to tackle, something in the Cat Mint caught my eye. I stopped for a closer look. 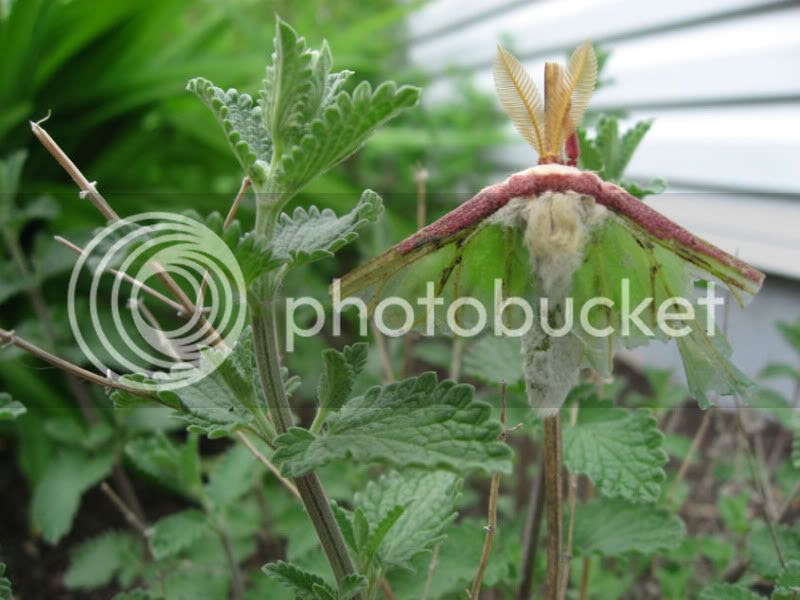 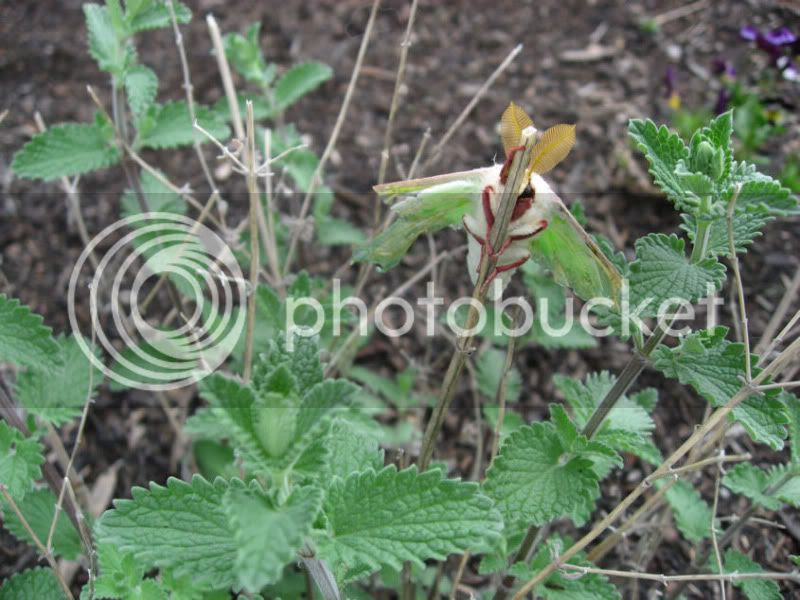 Unfortunately, whatever it is (I'd say some kind of moth), I think it must be dead. It's wings look all ragged. Shame, looks like it would have been pretty.

All in all, a satisfying evening. According to the weather page it is still 19 degrees out there, and I'd believe it. The weather page says the high for today was 26 which is definite summery weather. It is supposed to cool off a bit by tomorrow, but I feel like we've had our first taste of summer. Definitely looking forward to more!
Posted by JavaChick at 8:59 PM

That looked like a perfect summer evening, and your dinner looked great (if you like fish, which I don't but whatevah)

A friend of ours who lives here but is originally from PEI gave us some lobster that his son had sent out on the plane, so that's what we had for supper (I don't like fish, but I do love shellfish!)
Then we had angel food cake with fresh blackberries for dessert. I didn't think to take pictures...

Bag Lady - I keep trying to like fish. I know I didn't mind eating it when my Mom cooked it, but I don't feel confident about cooking it and I'm not sure what types I like, so I've been experimenting. This one was a hit, I'd definitely buy it again. I also had some pan fried haddock in a restaurant in Digby last summer that was wonderful, but I haven't been brave enough to try making it at home.

And I hardly ever think to take photos either, but it was such a beautiful evening. As soon as I set up my little table with the flowers I knew I had to take pictures!

Sadly, all my tulips have bought the farm, so to speak. So it's great to come enjoy your vicariously. Thanks for posting the photos!

I love seeing peeps cook for themselves and treat themselves to a nice evening WITH KITTY like that.

And, that's, like, a creature out of Fringe or X Files or something Yikes!

Haley - I always enjoy hanging out with my kitties. And yes; it is quite the critter. :)

great pics and a nice backyard.

Sagan - Yes, it was definitely a BBQ day.

Crabby - you would be welcome any time. Fred is a bit on the shy side, but George is always happy to have more people to fuss over him!