The weather turned extremely hot at the end of last week - particularly the weekend. Like gross hot. Too-hot-to-move hot.

Saturday I did move - we were going to one of our theme dinners - the theme of the evening being appetizers. So I went out and got groceries, came home and did my boot camp, then spent the afternoon in the kitchen. I was drained. Wilted.

Fortunately, our friends have air conditioning in their house. Every so often, Husband will bring up the subject of getting some sort of air conditioner. But I always say we don't get extremely high temperatures often enough to need it; he has one in his computer room, so we can get by. But this weekend was just nasty.

Sunday I did as little as possible. And ended up camped out with Husband in his computer room to enjoy some air conditioning.

I did venture outside in the evening. It hadn't cooled down much at all, but some of my plants actually needed watering - first time all summer.

As soon as I came in the gate I saw this: 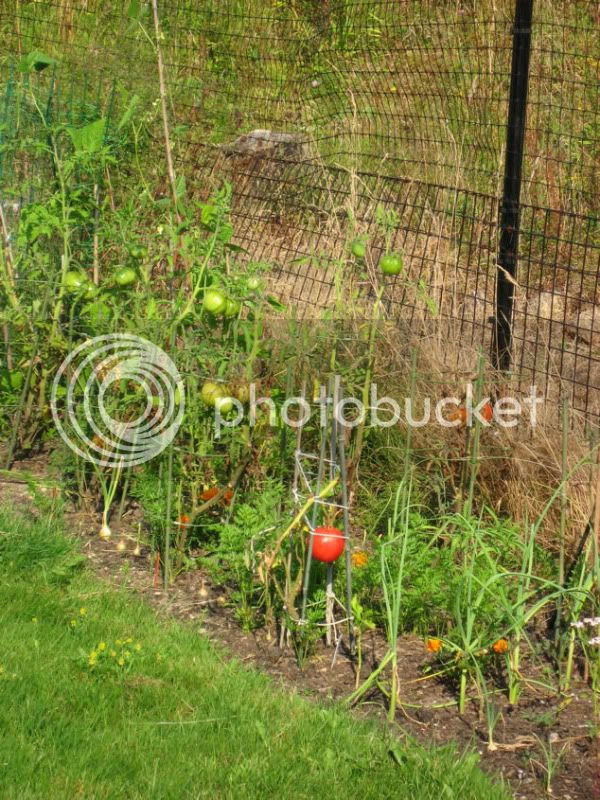 My first (non-cherry) tomato of the season! 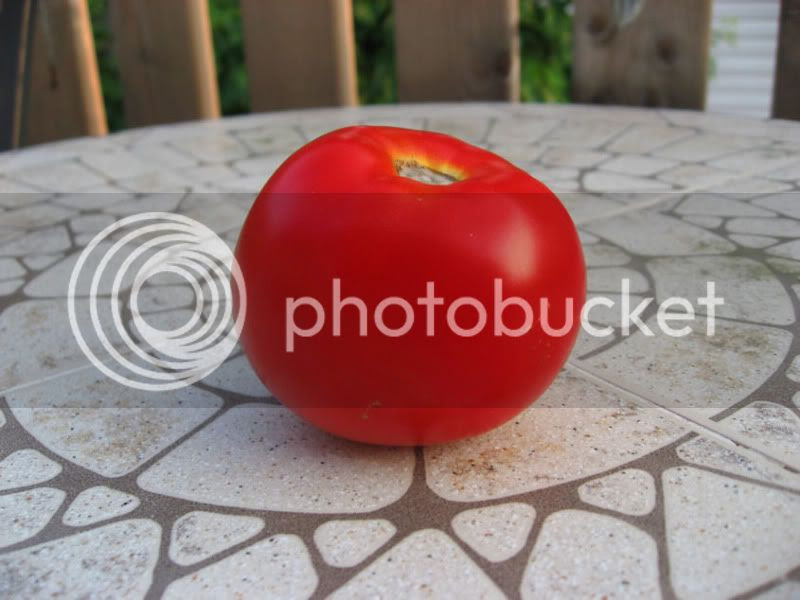 Yesterday was still hot, but not quite as bad. Which is good since it was another boot camp day.

Today was supposed to be cooler - I'm sure that's what I saw when I looked at the weather forecast yesterday. So I was thinking I'd come home from work and do some house cleaning because things are in pretty bad shape around here. But, we arrived home to a wall of heat. Back to the air conditioned computer room I went. It's starting to cool off a bit now, but it takes our house so long to cool down.

I don't like to complain about the heat, after all my griping about the constant rain, but this is a bit much.

Anyway, out to water my garden again and have a bit of a look at things...

My other variety of miniature cucumber is starting to produce. 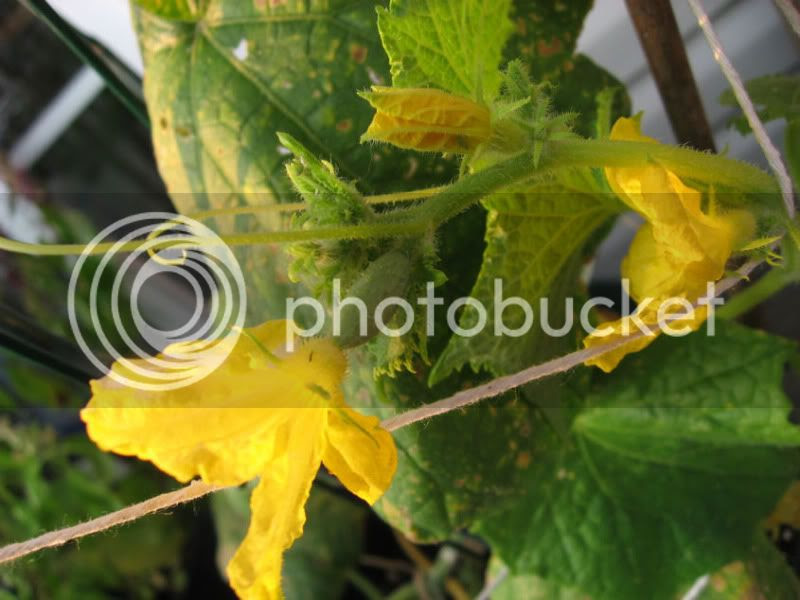 And my Rocky Cucumber is still going. 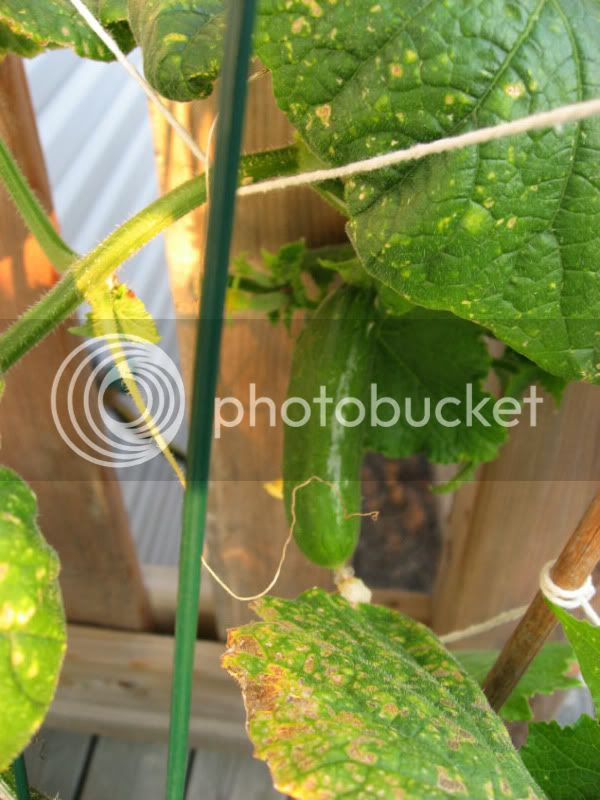 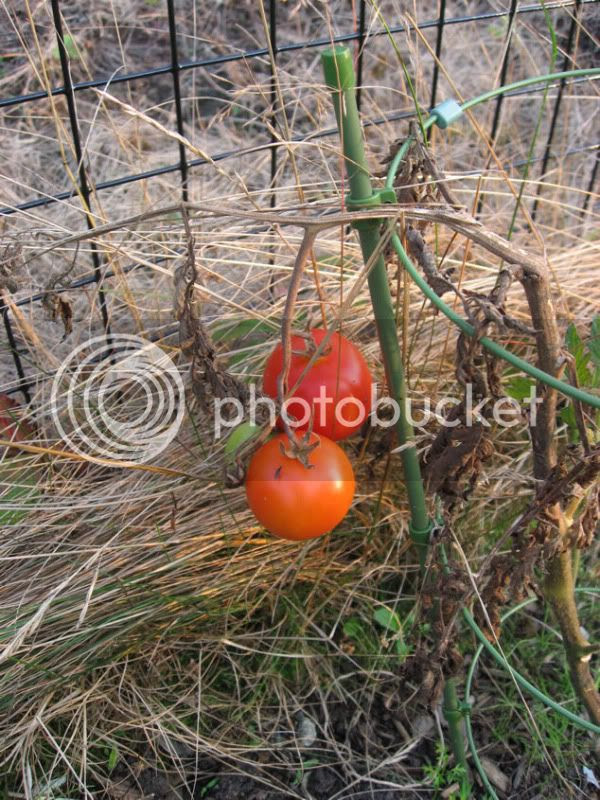 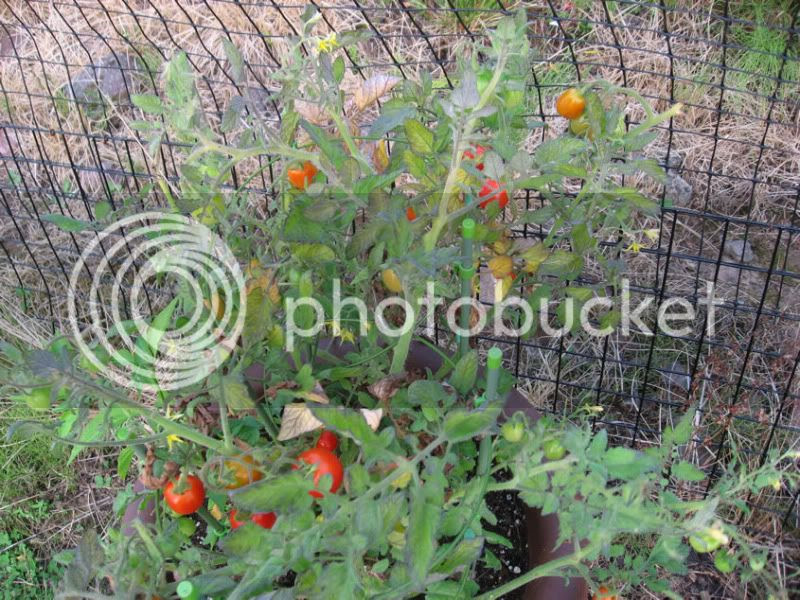 I didn't spend much time out there though because the mosquitoes were pretty vicious. However, I came in with: 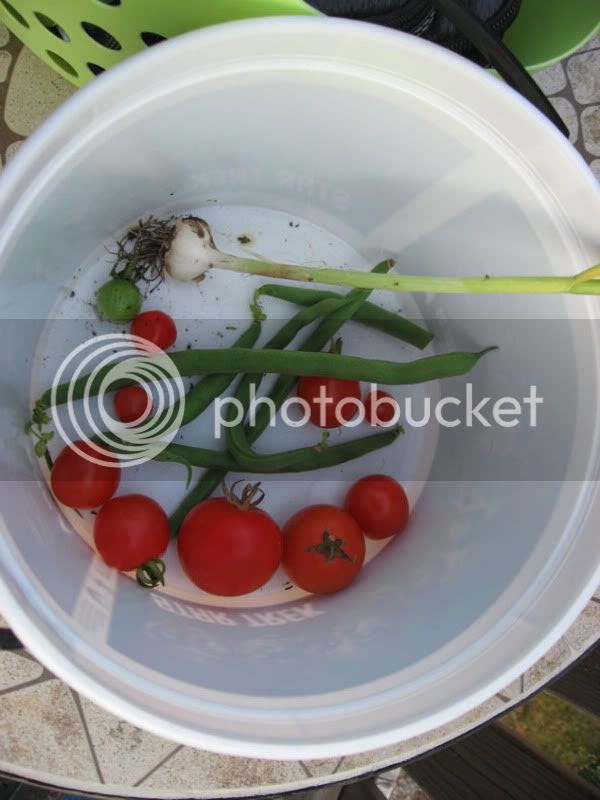 Some string beans; there are more on the plant that are not far behind, so I'll collect them in the fridge until I have a decent amount. I did dig up a bulb of garlic, and it's pretty small so I'd say I'll be taking The Bag Lady's advice and leaving most of in the ground until next year.

When I put all the tomatoes together like this, I was actually surprised at what I have so far: 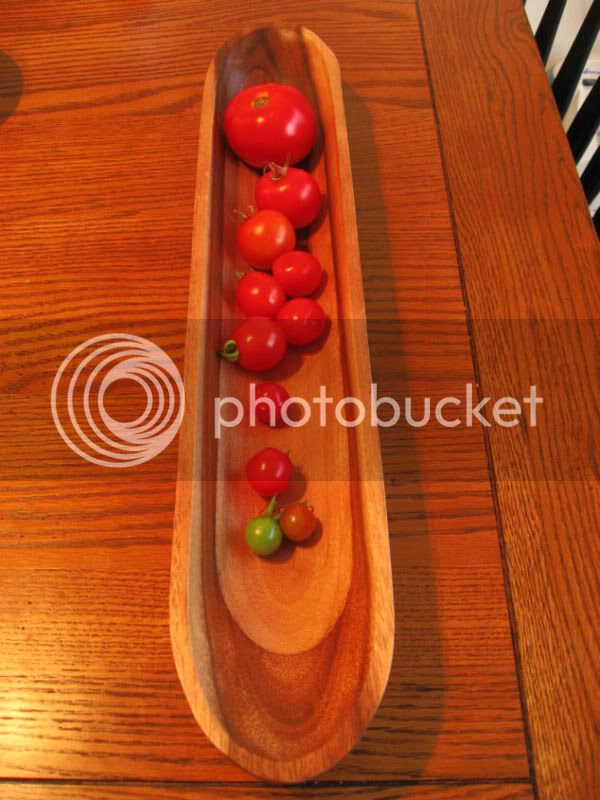 It's funny to hear about the lack of air conditioning but my parents are the same way. They have a window unit that they put in during the summer months but this summer was pretty cool so it didn't even go up this year.

Your tomatoes look so yummy! Fresh out of the garden is the best!

Do you close all the windows and curtains in your house during the day to keep the heat out? Then open them at night to let the cool air in. That's how I deal with it. Of course, now that the no-see-ums are out in full force, I don't want to open the windows at night.... sigh.

It's supposed to be 29C here on Thursday.

I am jealous of your tomatoes. But I did eat a home-grown green pepper in my Greek salad for supper!

Sigh... it's 28C right now in my house, at 10 pm. I am SO with you re the heat probs. Excessive temperatures seem to have a bad effect on the brain cells.
If a breeze comes along, I'll send it your way :)

Crystal - The first half of our summer was cool & rainy - not nice at all, but we've jumped right to sweltering. Thing is, we don't even really have a good place to put one of those window units (I refused to have one hanging out a window on the front of the house). But if this weather keeps up, I imagine Husband will find a place for one.

Bag Lady - We have no curtains or blinds on our patio door, which is where the sun hits during the hottest part of the day. Just one of those things I've never got around to. Sigh.

That tomato is too precious!

when is it officially too hot NOT to bicker incessantly with your 3 yo?

um-um those tomatoes look delicious!! Mine are loaded with green tomatoes right now. I have been getting bell peppers out of my garden and sweet basil. The fresh sweet basil is so yummy in homemade tomato soup. Have a great weekend:)

Hope the weather's getting better! We've been getting the hot humid icky stuff and it just saps my energy! But at least it cools down at night.

And those tomatoes look so tasty!