The weekend flew by. Nothing too exciting - just doing things around the house.

We had some leftover Chipotle Peppers in Adobo sauce in the fridge, and I started wondering if I could make Chipotle Salsa. Once I start thinking about something like that, I'm not happy until I try. It's too early for field ripened tomatoes around here, which make the best salsa, but I found some organic vine ripened hot house tomatoes that looked half decent. It was an experiment, so I just made a small batch anyway.

I ended up with 3 jars of Lime & Chipotle Salsa, and about half a cup left over. In the back there are some miniature cucumbers that I picked off my plant on Saturday as well. 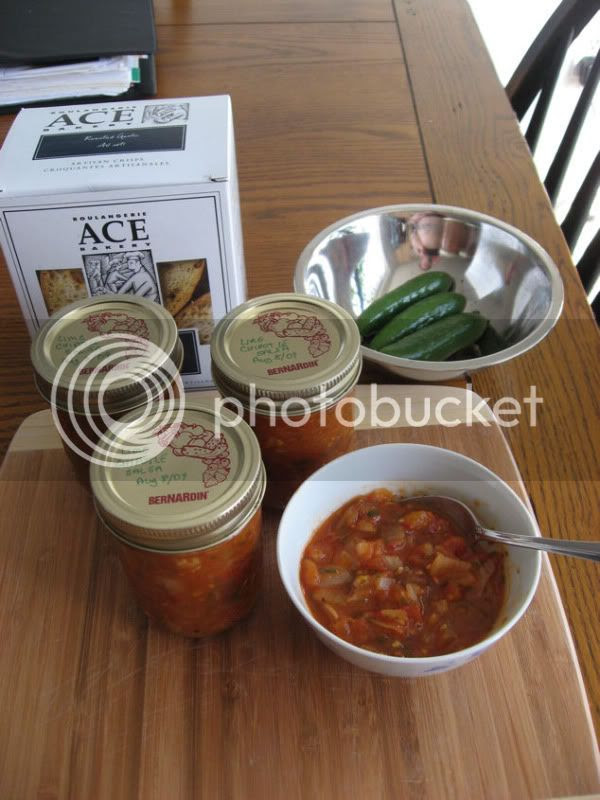 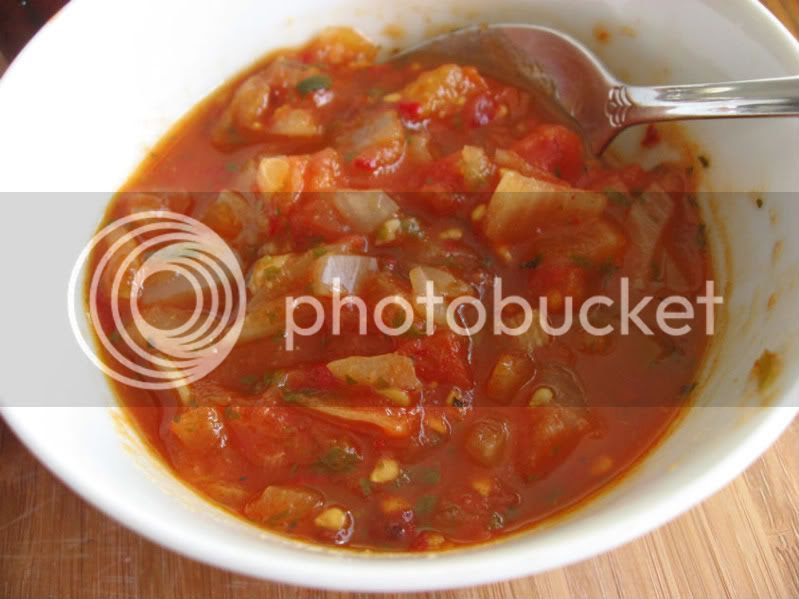 I taste tested with these Artisan bread crisps which are pretty tasty. 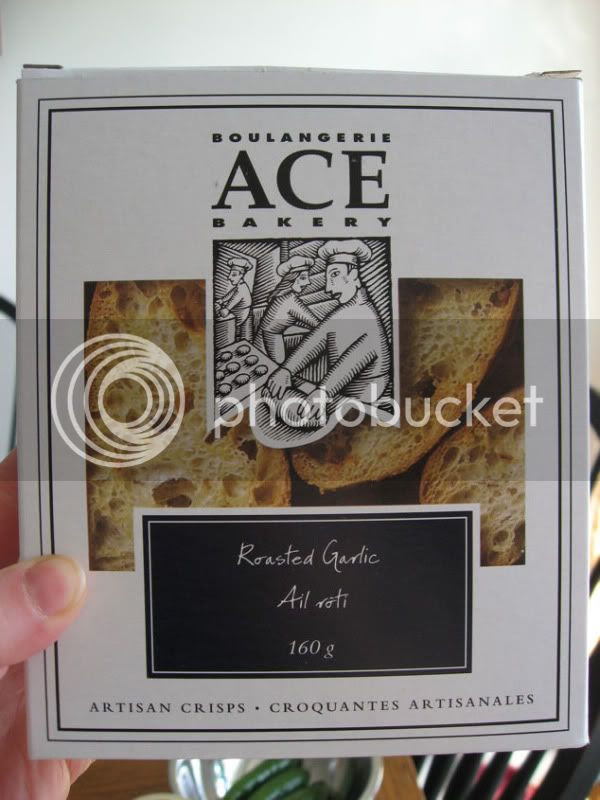 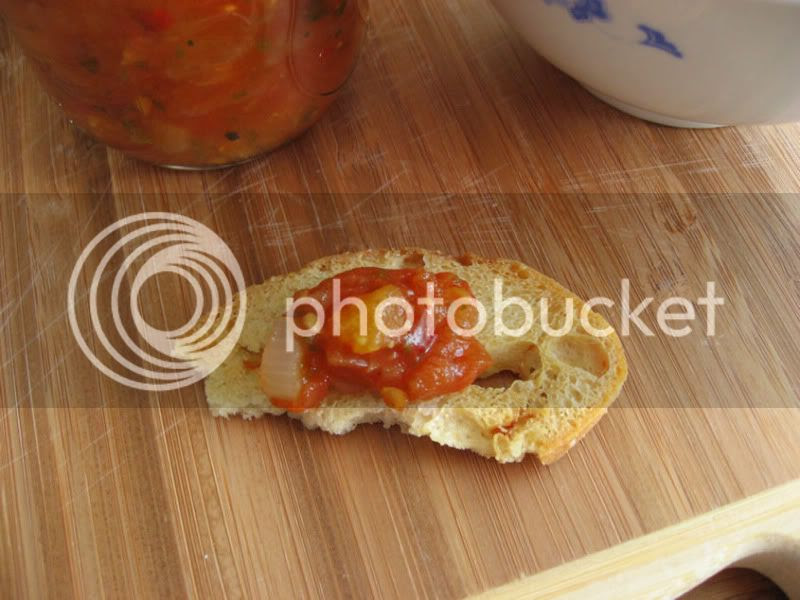 I'm not sure what I think of the Chipotle flavor in the salsa. I keep going back and taste testing. Obviously it's not terrible, because I keep eating it, just not sure if I like it enough to make it again or if I'd rather stick to my usual. One moment I think I don't like the smokey flavor, next minute I decide that it's good, especially with the lime in there as well. We'll see.

It was insanely hot on Saturday. After I finished slaving away in the kitchen, I went down to the basement to get in my final boot camp workout for the week. I think Workout C of this phase may kill me. It took me 45 minutes. Then again, maybe it was just the heat and the fact that I hadn't been feeling so hot all weekend anyway. Guess we'll see how it goes this week.

After my workout, I took a shower, then took my baby for a walk. It was a pretty nice evening. 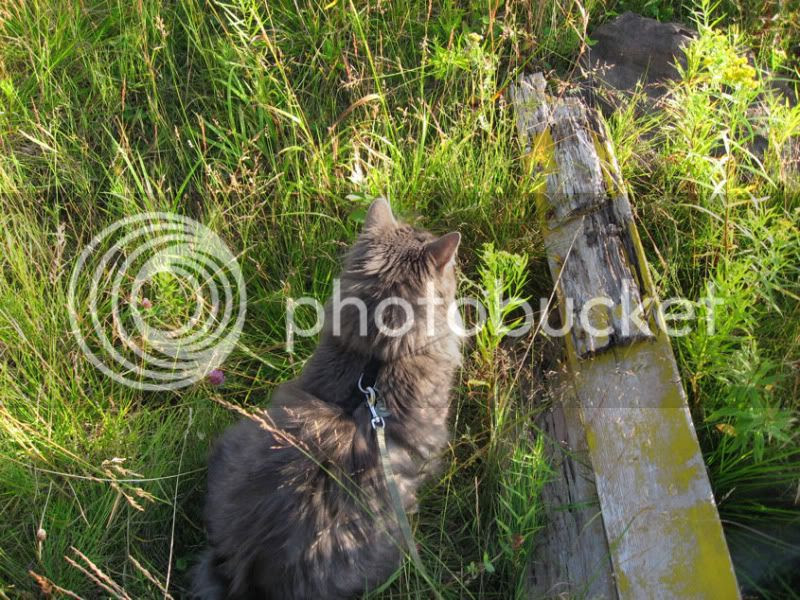 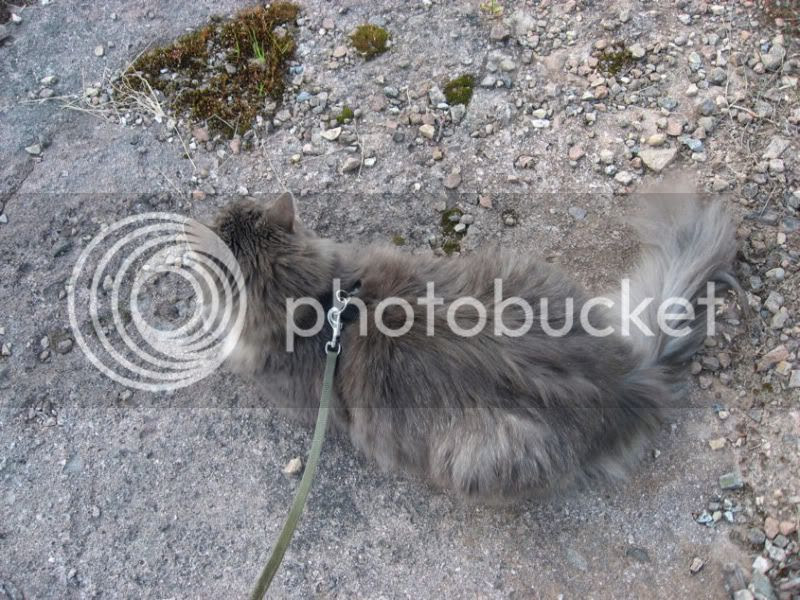 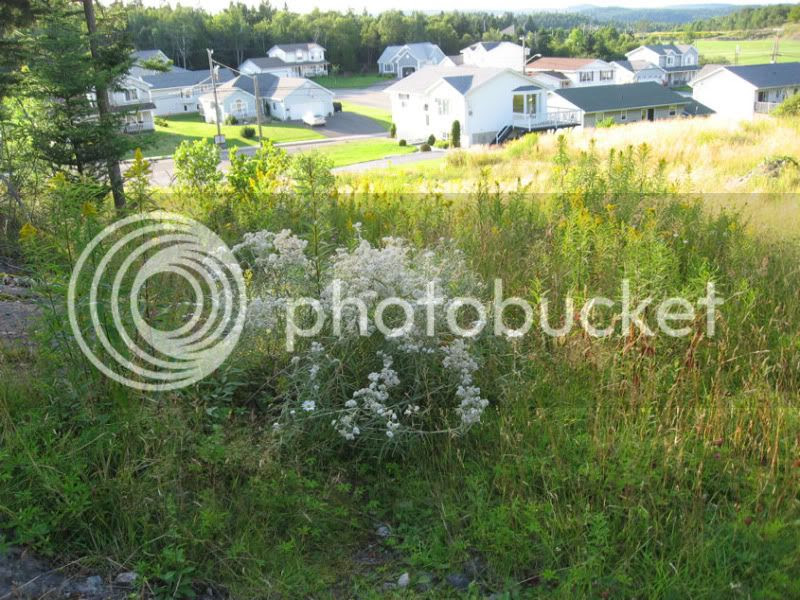 Then I planned to have supper and relax for the rest of the evening. Some of the neighborhood deer put in an appearance, and this is how confident these guys are.

The neighbors came out, got in their car, backed out of the driveway and drove away; the deer kept munching on their lawn. 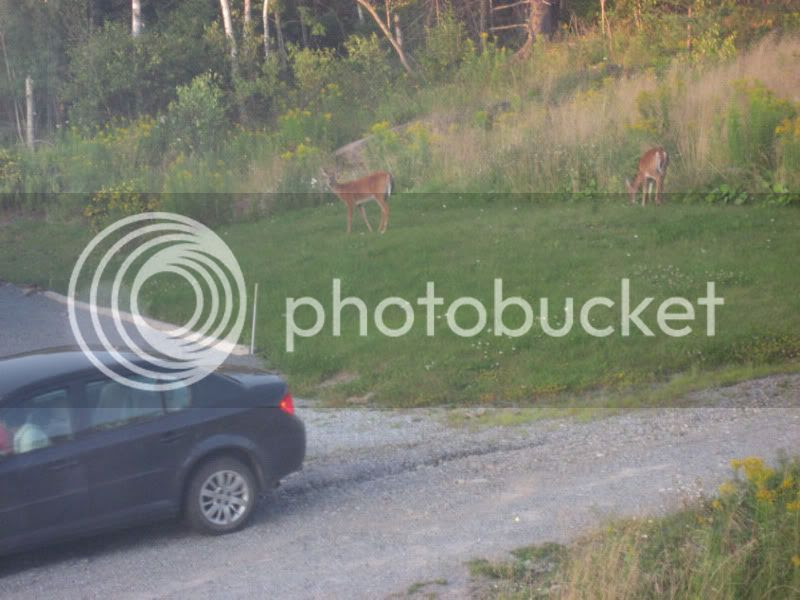 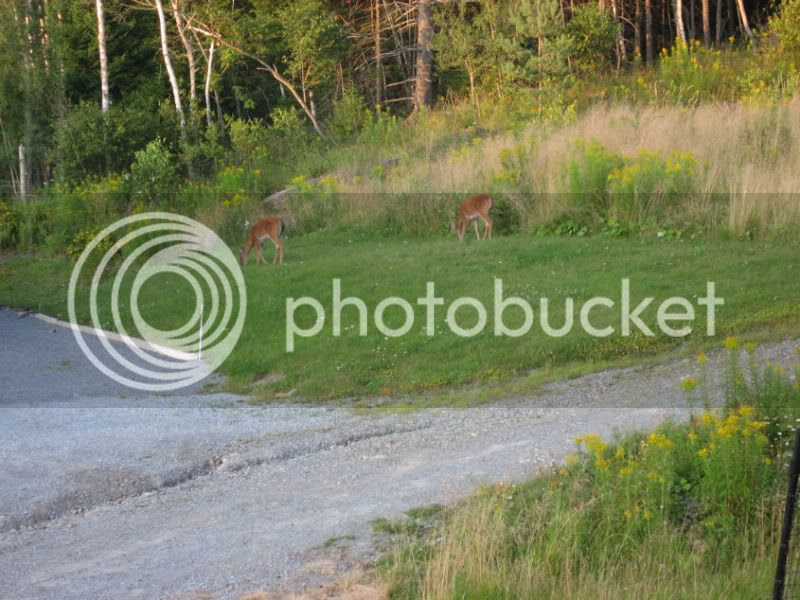 Sunday I did some work in the yard. Our landscapers discovered that we have cinch bugs which are killing our grass. The worse was the area outside the cat fence, so they sprayed out there, but they know I prefer not to spray inside the fence if I done have to. Since the situation was not as bad inside the fence, they explained to me how I could get rid of them in a cat-friendly way. Not particularly JavaChick friendly though. It was a slow process and it was really hot out.

Basically, I made a homemade insecticidal soap. I would spray spots on the lawn where it looked like the cinch bugs were killing the grass, then lay a cloth over it. I'd let it sit for awhile, then lift up the cloth. If there were little red cinch bugs on it, I'd brush them off into a bucket of the insecticidal soap and put the cloth back down. I'd repeat on that spot until it seemed like they were all gone. While I was waiting, I did some weeding in the gardens. 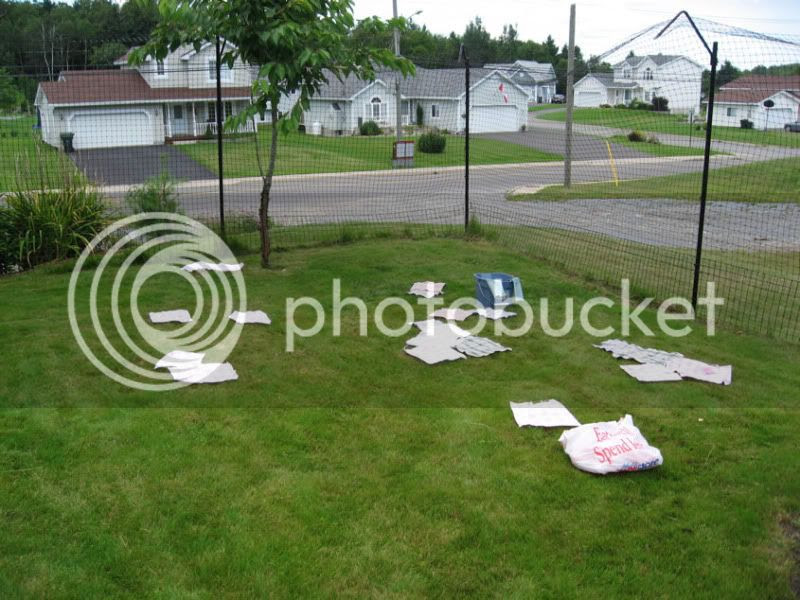 When it got too hot and I felt like I'd had enough sun, I came in the house for a break. Then I did some house cleaning. After supper I went out in the yard to do some more work. I took out the citronella torches that I bought in the spring at the dollar store. 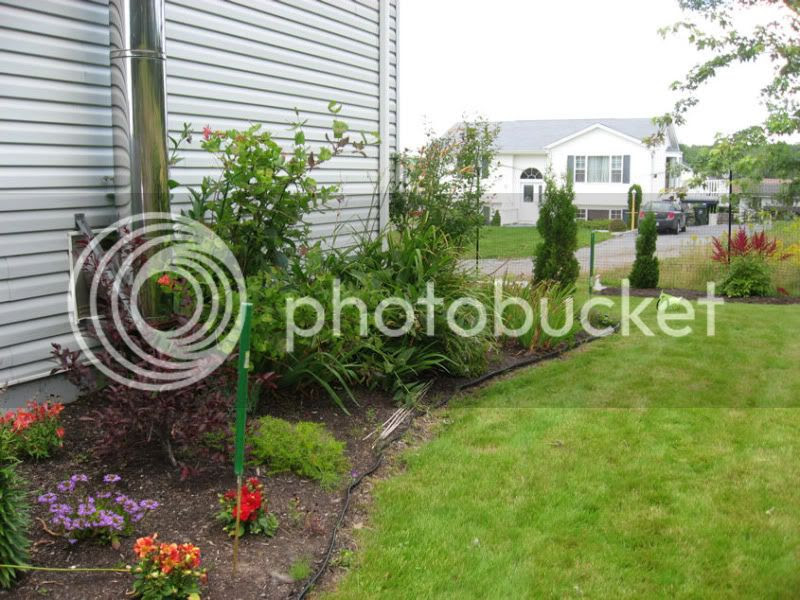 I also had to prop up my grape/cherry tomato plants that had fallen right over. 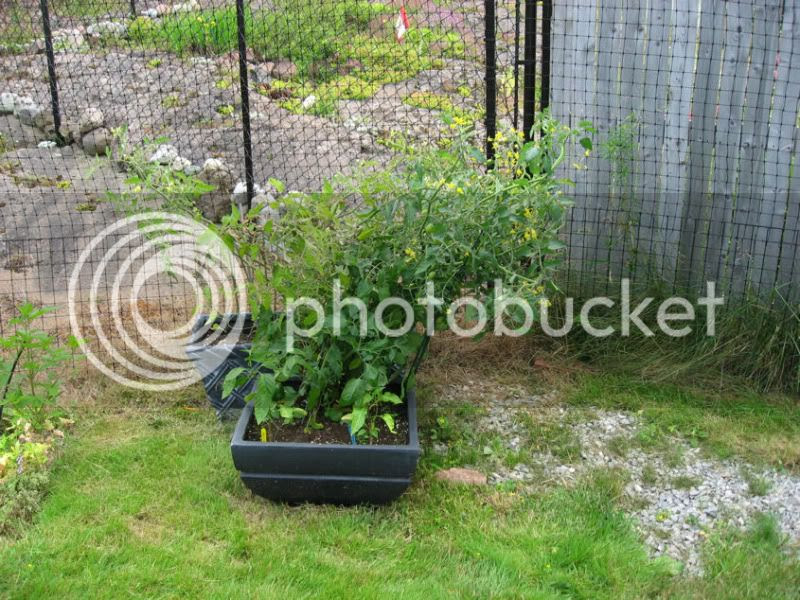 My gardens have been pretty neglected this year - so much rain, it has hardly ever been decent to go out and do any gardening. Fortunately, things seem to survive without my interference. :) 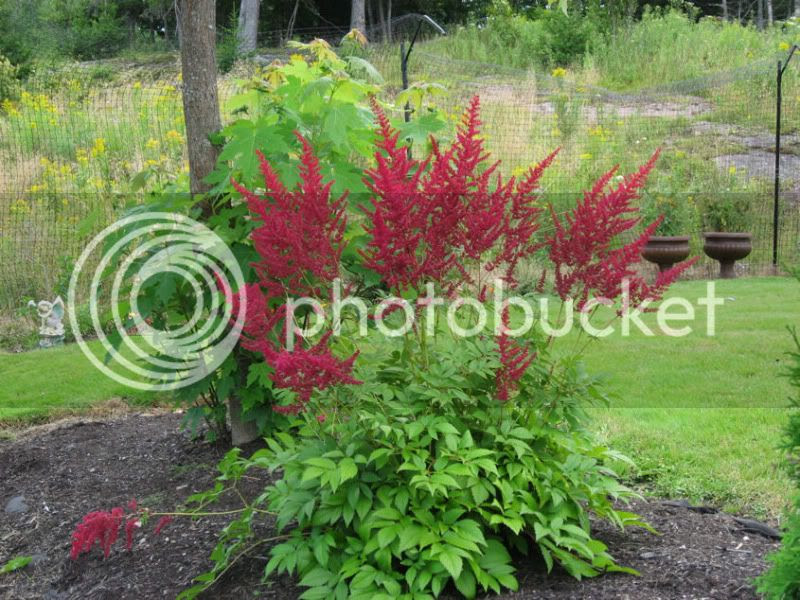 So no formal workout on Sunday, but it was a busy day and I was tired by last night.

Today it was back to my Boot Camping. Then I made Penne pasta with Shrimp & Vodka Sauce for supper. Tasty way to end the day. 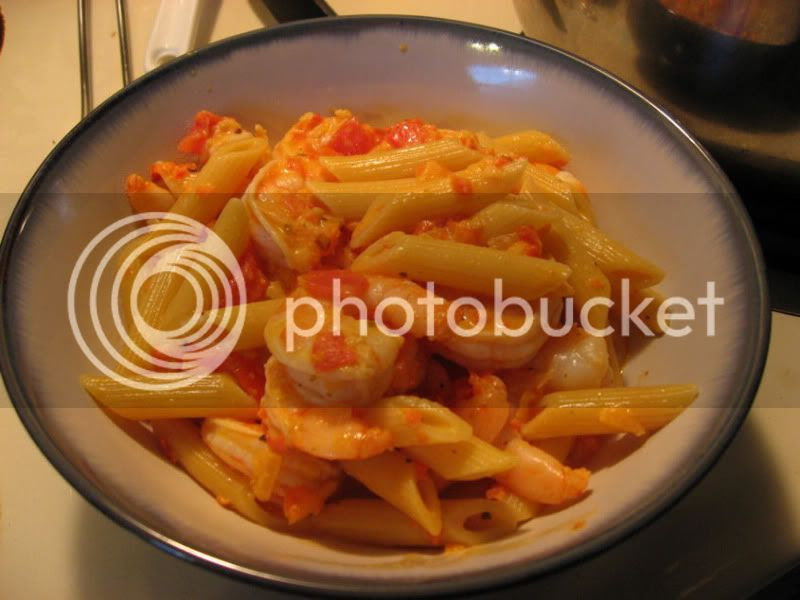 Posted by JavaChick at 9:52 PM

Sounds like a great weekend! And I loved that last picture of your penne with shrimp... yum!

Wait... what was the picture of the reddish-pinkish-purplish thing that was so pretty?

And I meant to tell you, I have a tomato on one of my tomato plants! (Yes, the start not the ones from seed.) I'm so proud of my plant, I really should take its picture. Except it doesn't look as nice as yours, so maybe not. I'm still going to enjoy the tomatoes :)

is it sad that I still read your posts, admire your garden, and have a vast unweeded wasteland outside my back door?

(& have zero plans yet to attack aforementioned wasteland :) Im hopeless)

Bag Lady - I enjoyed every bite!

Merry - The plant in the second to last picture? That would be an Astilbe.

Miz - I guess we aren't all meant to be gardeners.

Sounds like a fun and busy weekend...love the pictures, esp. the deer hanging around the yard :)

I love pasta with shrimp in it!

Those mini cucs are so cute.

Love all the pics. And how cool is it that you can take your cat for a walk?

Crystal - I could have done without the bug hunting, but the rest of it was fun. :)

Crabby - Walking a cat is a very leisurely activity - walk a bit, stop and look around a bit, walk a bit...