It was quite a nice day today – sunny and warm (for the time of year). I wasn’t expecting it because I’d thought the forecast was for rain, so it was a pleasant surprise.

There were 3 cruise ships in our little harbor today. I had planned to head down that way for my afternoon break anyway, and since it was such a nice day I extended my stroll a bit to check things out. 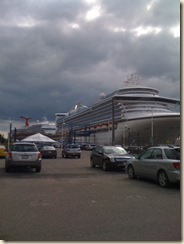 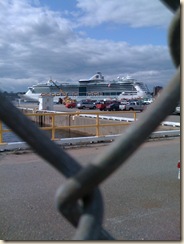 I thought the two in the first photo looked kind of funny, like they were parallel parked. The third was further in, near the boardwalk. Not the best photos I know – I was using my iPhone and the sun was bright so I could hardly see what I was doing. You should be able to click to enlarge though.

I walked down to the board walk for a closer view of ship #3, and looked back across at the first two – you could only really see one from that angle though. 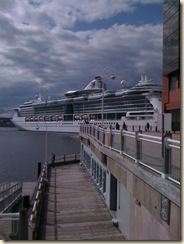 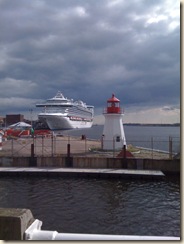 I wanted to keep walking, it was just such a nice day, but I had an errand to run and I wasn’t exactly wearing walking shoes so I turned around and went in the Hilton entrance to Market Square. It’s been a while since I’ve been down there and seen these statues. 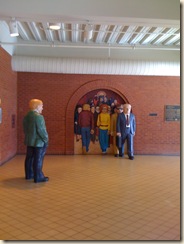 Three cruise ships puts a lot of people in our little uptown area. It’s interesting to see all these tourists wandering around the place where you live and work every day.  I’ve been living here for 10 years now, so to me it doesn’t seem like much of a tourist-y destination, but today it made me think of when I first moved here. For the first little while I had a lot of fun showing family and friends around when they visited.

It was still really nice out when I got home, so of course I had to take my feline pal for a walk. 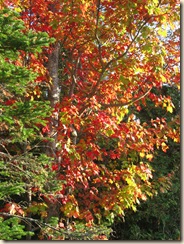 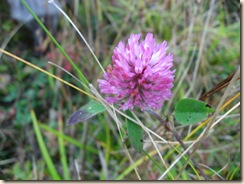 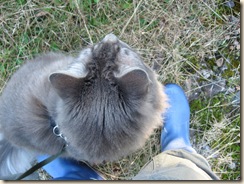 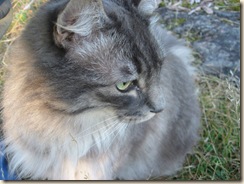 Today’s workout for the challenge was intervals. Since I started doing running intervals again last month I was quite happy that Intervals were part of the workout plan for the challenge. I am trying to challenge myself, but still very conscious of being careful and not overdoing it. Running is like a carrot forever dangling in front of me; I had it once, but I let go and though I’ve tried and tried I have not been able to get it again. So as much as I do want to give the challenge my all, I do not want to sideline myself again.

So today I did intervals of 2 minutes walking, then one minute running. I did that 7 times, which took me up to 21 minutes. Then I walked for 9 minutes to cool down, followed by stretching.

When we made stuffed peppers the week before last, we made double the filling and froze half. I defrosted it on the weekend and Sunday we made another batch of stuffed peppers which gave us leftovers for tonight.

Before I went downstairs to do my intervals on the treadmill, I put the peppers in the oven at low heat. After my workout, I prepared a head of broccoli and put it on the stove to steam, cranked up the oven a bit, and went to have a quick shower. By the time I came back to the kitchen, it was all ready. 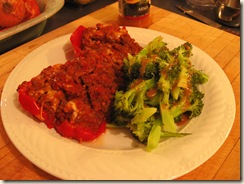 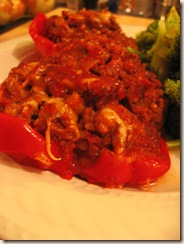 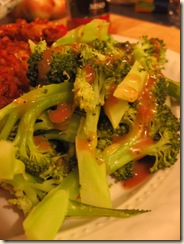 And that’s a wrap for Tuesday!

Posted by JavaChick at 9:30 PM

Sounds like a great day. I was trapped inside the office all day, and it was beautiful outside! I'm glad you got a chance to enjoy similar weather.
And go girl! Intervals are our friends. (At least, that's what I keep telling myself.)

I am drooling over that broccoli and miso dressing!

So gad you had a lovely day :)

Merry - I was really glad I could get out, even briefly. Trying to soak up all the sun I can before winter rolls around.

Rachael - The broccoli with miso dressing was pretty good, I gotta say.

Maggie - It was a pretty day! I enjoyed it.

Thanks for your comment on my blog. I agree with you, some people don't eat at fast food restaurants often (me) and when they go they want to splurge (bugers, fries!). But it's those who eat there too often who need to change. IT's an interesting issue, and I think we are making strides at helping those who need it most, but the calorie thing just isn't the right step.

Oh, and once a runner always a runner. No matter how much time has passed. You'll be running long distances in no time!

Your dinner looks fantastic, I am getting hungry just looking at it! Glad you got to enjoy the beautiful day and take advantage of soaking up some vitamin D!
And yes, intervals are friends, even if we sometimes hate them....