I had a dream last night that the snow was all gone, but when I woke up this morning it was still here. It suddenly looks and feels like winter – though it may not last as we are supposed to get rain later in the week.

At least enough time had gone by for the roads to be clear so it was a normal drive to work this morning. It was a very pretty drive actually - all the trees and shrubs were coated in snow, it looked like frosting. Very pretty in the sun.

Guess what I had for breakfast? 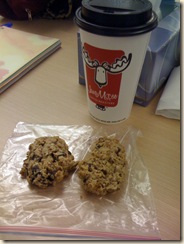 Yep, I had cookies. I know, I know…That’s not what they are meant for…but it was tasty and it kept me going until lunch. Which I totally forgot to take a picture of until after I was finished eating. Oops! It was Sweet Potato & Black Bean Mole with Quinoa; if you scroll back to last week I’m sure you can find a picture…

It was a busy day, but I did make time to walk up to the City Market and hit Pete’s Frootique for some Honeycrisp apples. I also snagged an afternoon snack while I was there… 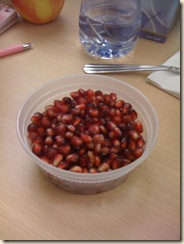 I also ended up getting a second coffee – I found it chilly in the office today. 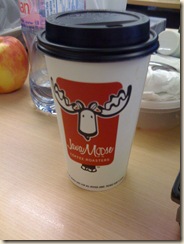 We also came home to a chilly house, and I have to tell you the idea of changing into my workout clothes was not appealing, but I did it. Then I went down to my chilly basement and quickly warmed up doing the December Circuit A workout. I did the circuit 3 times and felt about ready to collapse when I was done.

We finished off the bag of broccoli slaw, with some Asian Sesame dressing. 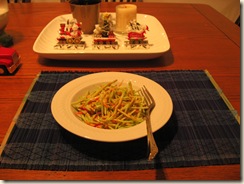 Then had leftover Indian Spiced Haddock and Basmati Rice. 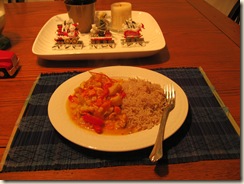 Then, to warm up, I had a cup of Peppermint tea and some cookies. 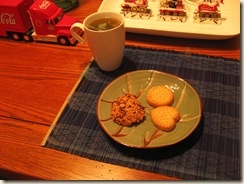 Well okay, the cookies didn’t necessarily warm me up but I enjoyed them – two Walkers Shortbread cookies (next best thing to homemade) and one more Super Charge Me cookie.

Now I’m ready to crawl in to bed and read for a while. Night folks!

And there's nothing wrong with a couple cookies for breakfast every now and then, hehe.

Yep, it's that time of year to be all Cookie-Monster-Like. :)