The Musical Conclusion – Or Perhaps I Should Say the New Beginning

When last I posted, I was getting ready to head home to Nova Scotia for the Holidays. Of course I was looking forward to visiting with family, but I was also kind of excited because I would finally get to meet my new piano!

We actually had a bit of a rough ferry crossing on the way over – it was very windy. Normally I am quite happy to sit and read for the 3 hour crossing but for the first time I found I couldn’t settle down to that. But, we arrived in one piece and hit the road for Greenwood.

We made a quick stop in Middleton at Husband’s family home, then continued on to my parent’s house for hugs and greetings and lunch and my first look at the Digital Piano. Or the box anyway. 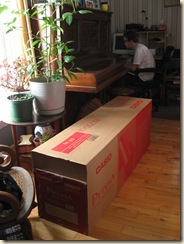 There it is; the new piano, sitting right next to the old.

We had a lot of fun fitting that box into our little VW Rabbit for the trip home, let me tell you. I really should have taken a picture, but Husband was seeming a little cranky about the whole thing so I didn’t want to push my luck. It did fit, but let’s just say it was a very cozy car ride.

We came home on Sunday, Dec. 27, and my [NS] sister came over to Saint John the next day to spend New Year’s with us. Somehow we didn’t accomplish much during our visit, other than a lot of relaxing. I did make a start on clearing space and reorganizing things in the basement, but that was about it.

We dropped Sister off for the 9 am ferry yesterday. It was starting to snow a bit, so on the way home we made a stop at the grocery store to pick up a few things since the forecast was saying we were in for a lot of snow.

Then, finally, I got back to work on reorganizing the basement and Husband helped me to put the piano together. Actually, he did most of the putting together, I was mainly there to hold things.

The cats really enjoyed the box that the piano came in. 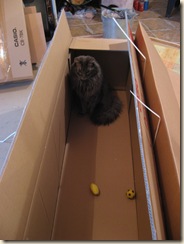 I really should have got video – Zappa was going nuts in there.

But, with all of our attention focused on the piano, Zappa did not waste any time checking it out either. 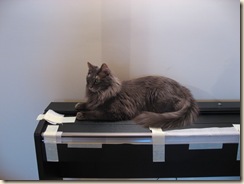 Frank did make a few appearances, but I didn’t manage to get him on camera.

Finally, it’s here, it’s all set up and ready to be played. Technically, you are not supposed to set anything on top of the piano (so says the instruction manual), but in an effort to keep the cats from jumping up on it (they are not exactly feather weights, my giant felines), I did set a few lighter things on top. 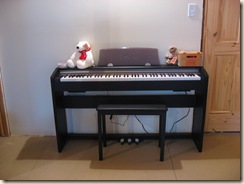 I have a collection of Coca-Cola memorabilia (my father and my father-in-law both give me collectibles when they come across something they think I will like) that used to sit on a shelf in the spot the piano is now occupying.  A lot of it is going to be packed away for the time being, but I picked a few things for guard duty. There is a set of Coca-Cola coasters (which I bought for myself), a polar bear (from father-in-law), a small bear (which I think came from my Sister) and a clock radio (from my Dad).

I have another polar bear that my Dad gave me years ago. He’s too big to fit on the piano, so he’s keeping the piano books company. 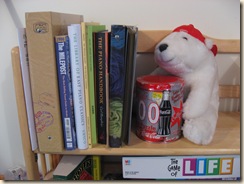 I have to say, after all of that, I did approach the actual playing of the piano with a certain amount of trepidation. It’s been years! I don’t really want to think how many…But I was pleasantly surprised/relieved. I had brought my piano books from home and sat down to give them a try. I am definitely rusty, but it’s not as bad as I thought it might be. People have been telling me that it will come back pretty quickly – Husband too and he’s never even really heard me play – and it looks like they were right. I had one good long session yesterday, but I was at the piano a total of 5 times from the time we had it all set up (around lunch time) to when I went to bed last night. I am having so much fun already!

And as it turns out, we did get a bit of snow…

When we had dropped Sister at the ferry terminal it was just starting, but the snow came down pretty heavy for most of the day. 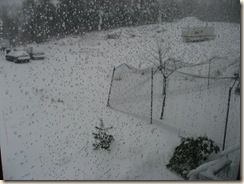 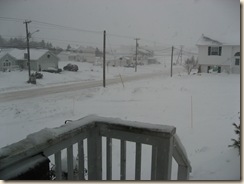 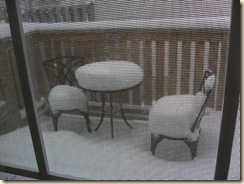 And then I took these this morning… 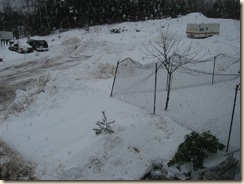 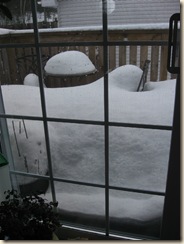 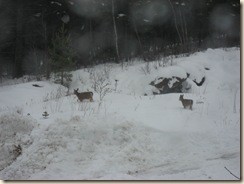 So far today it has been back and forth between rain and snow. I still have some work to do to get things tidied away in the basement and I’m thinking I’d like to get in some yoga;  exercise has been almost non-existent and I should start easing back into it.

And of course, the piano is calling to me. Tomorrow it’s back to work, but today there is still time to play!

Beautiful! But... how does it sound? I've never tried one. (Digital, that is.)

Merry - it's not bad at all. Not as full a sound as the piano I was used to playing at home, but it does sound like an actual piano. There are a few different modes of which I have tried two - Modern & Classic, and I prefer the Classic mode.

Oh, it's lovely! I am jealous. I shall be saving my pennies for my own piano. In the meantime, enjoy yours and play something nice for me!

Awesome! Me, I've got to say it didn't come back to me at all. Not with piano or guitar-probably comes back to lack of any natural talent. Mike picked both up agAin right away. And he barely ever has time to play. Guess I'll stick to cooking, maybe take up painting again one day if we ever move into a place with decent light. Enjoy your new toy!

Bag Lady - I confess, I'm finding it hard to get anything else done because the piano keeps calling my name. I suppose it's the new-ness of having one again after all of these years and it will wear off eventually.

Jen - To be fair, I don't think you spent as much time plunking away at it as I did. I'm sure if you wanted to learn, you could. You know, if you had time between taking care of 3 kids and a husband...

How fun!! I played the piano for about 5 years, and I always hear it will "come back" however it hasn't happened for me yet. OF course, I don't have a piano in my home, only at my parents, so I rarely get the chance to play. I hope you are enjoying it!

Regarding your comment on my blog...yes, you are right, it's not an exact science. I was sort of joking when I called Taco Bell liars, as I really was implying that they made it sound so easy by saying "simply cut 500 calories out of your diet each day...yadda yadda" because obviously it wasn't that easy for Christine. She didn't cut 500 calories out of her diet, or eat 1250 calories each day. She may have attempted to, but in reality it's harder than it looks, you know? Thanks for pointing that out :)

The box is totally the best part ;) I played my piano last week for the first time in months. It felt nice. I forgot how much I enjoyed it!

Sagan - I always enjoy watching the cats with a new box. They have so much fun. :)