I actually remembered to take photos today! It’s a miracle. :)

We have had very un-January like weather over the past day or so. The temperature actually went up to 9 degrees Celsius last night, though it went down to around 4 or 5 for most of today. It also rained off and on all day, and of course there is snow melting all over the place. It is supposed to go below freezing again tonight, so things could be icy tomorrow.

We were quite late getting in to work today. Husband is coming down with a cold and was really dragging his feet. But we made. And apparently, the third time is the charm because I finally got my carrot muffin. 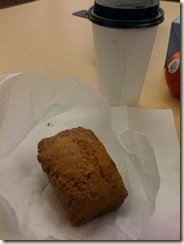 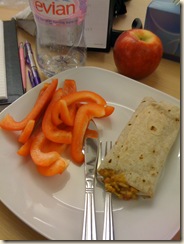 Another Amy’s Burrito with red bell pepper strips. I ate the apple later in the afternoon, plus a treat… 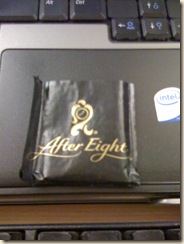 Today’s workout was Supersets + Abs and Steady State Cardio on the treadmill. I actually cheated a bit on the abs and substituted some stability ball exercises – I’m getting tired of doing planks; they are so boring.

Then it was time for supper which was ready and waiting in the slow cooker - Salsa Chicken and Black Bean Soup. 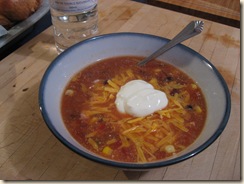 This is from A Year of Slow Cooking. I bought the cookbook, so I imagine you’ll be seeing quite a few meals from there as I try out new recipes.

This sounded really good. Since Husband could care less about garnishes, I let him have the last two pieces of corn bread and I garnished my soup with sour cream & cheddar; I figure that way we each get a little something extra.

At first I was eating around the garnish and was not all that impressed with the soup…But then I stirred in the sour cream and cheese, and suddenly it was fantastic. Amazing what a little sour cream and cheddar can do. I actually didn’t get around to asking Husband what he thought, but he did go back for another bowl, so I’m guessing he thought it was ok.

That’s about it for today. Not much excitement unless you count the fact that some feline or other threw up on the bed. Again. Which reminds me, I have to go check on the laundry and make the bed.

Have a great Wednesday everyone!

Posted by JavaChick at 9:58 PM

Yeah those little wet spots aren't that nice... I hate when my animals get sick.

Nice to see you got your carrot muffin today! The soup looks good too. :0)

And when we get back home from our housesitting thing, I want to drag out our slow cooker--so I love getting these ideas from you for possible new recipes. Thanks!