It occurred to me that I never really posted my results for the Fit Chick Express Holiday Challenge. As mentioned in yesterday’s post, workouts sort of tapered off at the end of the month, but I did maintain the same weight and according to my tape measure I actually did shrink a teeny bit.

At first I was thinking I must be messing up in my measuring, but I’ve been thinking that I can see more definition in my upper arms, so it makes sense that I must have lost some fat there. And if I lost some there, I could have lost in other places, no? I won’t list all of the measurements, but I just wanted to mention it because it certainly feels like a success. I’m sure that at some point in the future I’ll be joining another one of Angie’s challenges!

We didn’t do a real grocery shop or meal planning last weekend, due to the snow storm, and I’ve had other things to catch up on so I haven’t got back into the food blogging yet. But I thought I would share a couple of recent meals with you.

On New Year’s Day, we got together with a group of friends for a Chinese Potluck. Normally you’d think you would take one dish to a potluck, but Husband tends to get a little excited over picking recipes so we ended up making four things.

One of the dishes that we made was completely gone by the end of the night, but there were leftovers from the rest that gave Husband and I a couple more meals. 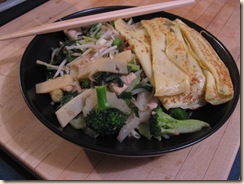 Spring Onion Pancakes was to be on the appetizer menu of a favorite Chinese restaurant we used to go to. We came across the recipe while flipping through our collection of Chinese Cookbooks and decided to give it a go. They turned out to be quite tasty, and we came home with leftover batter for dinner the next night!

The veggies can be blamed on me; I often find there is a lack of vegetable dishes at potlucks, and if we were having Chinese I wanted to make sure I had stir-fried veggies. We basically chopped up a bunch of veggies, put them in containers and them them with us, along with our wok and a Black Bean Garlic sauce. It did turn out to be the only veggie dish, but we still came home with enough chopped veggies for two more meals. We added chicken and there was dinner. 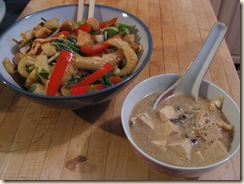 Husband can’t do Chinese without his soup., so we took a long a big pot of Hot & Sour Soup; I think he made extra on purpose so we could have leftovers.

The second night, we again added chicken and this time chopped up a red bell pepper as well, as there weren’t quite enough veggies left. 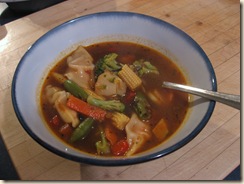 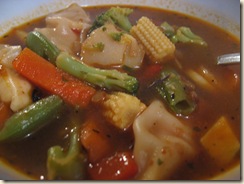 Tonight, discussing dinner on the way home, Husband said he was hungry. I knew I wanted to exercise, and cupboards are still a bit bare, so I suggested he could make himself some soup and I could find something to eat when I finished exercising.

Husband said that was silly, he’d make enough soup for me. I said I thought he was hungry, but he said he could wait. So I did my exercise thing, hopped in the shower, and came out to dinner – all ready to be eaten.

I’m thinking we should make this a regular weekly thing.

Last but not least, we decided it was time to try out our Anniversary gift from my Sister. 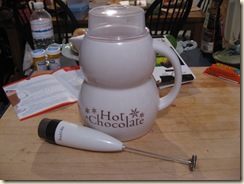 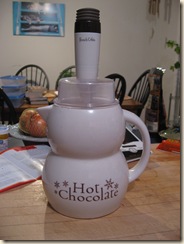 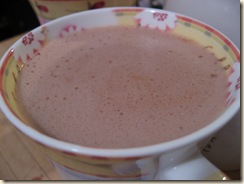 Neat, hey? I used half milk and half Unsweetened Chocolate Almond Breeze, since I have an iffy relationship with milk. I wasn’t sure how well it would froth up with the almond milk, but it worked like a charm!

Posted by JavaChick at 9:17 PM

I read your comment about the knives. I saw this ad on Kijiji thought I would send it along. I don't know if it's in your area or not but might be worth having a look.
Ad ID 166694985

while I know I should comment on the Fit Chicks Express you lost me in that anniversary gift.
please to tell your sister that ours is this sunday :)

You can make yummy asian food? I'm so jealous! I've never had the energy to shop for all the ingredients, and so I tend to do the greasy salty take out version.

You're inspiring me to do a bit more research though, because those meals look fantastic!

Miz - It is a pretty fun gift! We will enjoy it this winter, I'm sure.

Crabby - It's not hard, but it does require fresh ingredients and a bunch of chopping. Worth it though!