I was sitting at my desk this afternoon, around the time I usually try to take a break, and I looked out the window and saw this beautiful sunshine-y day and thought I should go out and soak up some of that sun. I walked down the hill and along the water. There were two cruise ships docked today, so there were lots of people around. The sun was shining, it was warm, with a pleasant breeze. I was so glad I’d gone out, because I know that the warm sunny days will be winding down soon enough, and winter will be right around the corner.

I popped into Market Square Mall because there was something I wanted to look at, then started heading back to work. I was standing at the crosswalk, waiting for the light to change when I felt a few drops of rain hit me on the head.

“Ah well,” I think; “the sun was nice while it lasted.” I don’t mind walking in a bit of rain, so I wasn’t too worried. But as I walked it started coming down harder and harder. I ended up ducking under an awning part way, and waiting for it to let up a bit. There were huge rain drops, just pelting down. When it seemed like it had slowed down a bit I walked the rest of the way to work. I ducked into the washroom and used some paper towels to soak up some water from my hair. The rain had soaked through the light denim jacket I was wearing, the bottoms of my pant legs were wet. I went back to the office looking a little bedraggled.

Five minutes later I look up and the sun is shining through the windows again.

We actually left work a little early today, and the weather was still switching between sunny/cloudy. I was debating: go outside or hit the treadmill? But I was in a treadmill mood, so that’s what I did.

I am attempting the running thing. Again. Am I a glutton for punishment or what? But I am going to take it really slow – I am promising myself – so that hopefully I will manage to keep going without hurting myself. I did short intervals of 2 minutes walk to 1 minute running – repeated that x 7. I wanted to do more, but I just walked for another 19 minutes instead, to give myself a nice long cool down period and a total of 40 minutes of cardio. I’m sure that sounds wimpy to you runners out there, but I really want to be careful.

It was still early, compared to usual (I was doing my post-workout stretching at the same time I was just starting my workout yesterday), so I went out to the garden. Some of my poor abused tomato plants are trying to come back, but I don’t think they are going to get much chance. I did come in with a few today though: 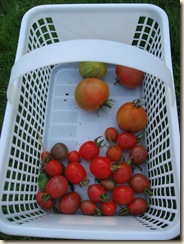 And of course, my baby was waiting for a walk… 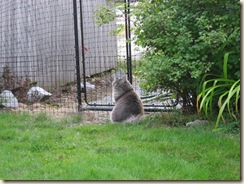 We tried, but unfortunately it didn’t go so well.

We have new neighbors across our little lane, the Dad and his two little boys came out just as Fred and I were heading for our walk up the hill. Cute little boys, but energetic and rambunctious in the way that little boys are. Which my poor kitty is not used to at all. He was a little spooked by their jumping around and so on. They wanted to touch him, which went ok because they approached slowly, but then they went back to their jumping around and yelling and Fred was kinda freaking out a little bit. The Dad was trying to talk to me, and Fred was trying to bolt in the opposite direction – 17 lb cat suddenly pulling on leash is hard to ignore.

Anyway, the boys were running back and forth, there were deer up on the hill, though I don’t think they stuck around long. The Dad went up after them and Fred went in the opposite direction. We walked along the outside of the cat fence, but we could only go so far – especially since I was just wearing flip flops – so I picked him up and carried him back. Then the boys came running again with this inflatable dolphin from Marine World – which I am sure they were quite proud of – but that was the end of Fred’s tolerance of the situation. He was totally freaked out and tried to launch himself over my shoulder (so I have some lovely scratches now). I gave up and took him inside then. The Dad was standing in his door way at that point – I hope he didn’t think I was being really rude or anything, but Fred was done and I was ready to go in myself.

Not sure if this bodes ill for future walks or not, we shall see.

Anyway, then it was supper time…Always starting to lose the light by the time we get around to supper, which makes the photographing difficult.

A little snack while we got things going: 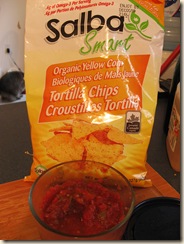 Had half a serving of chips, at the most, with some homemade salsa from the weekend.

Then I played with my camera while making salad: 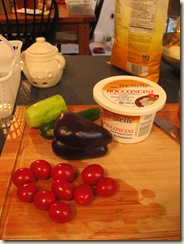 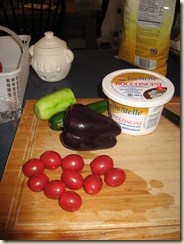 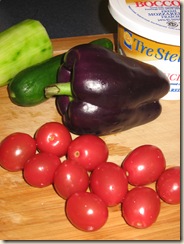 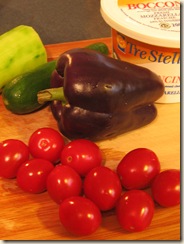 And these two are the other way around.

Husband thinks I’m losing my mind with all these pictures. 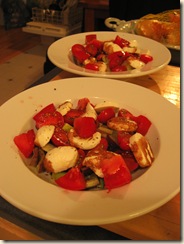 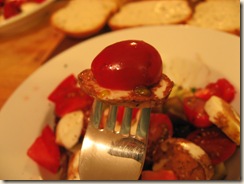 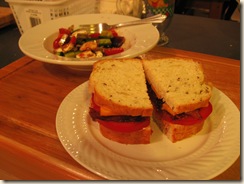 And a little bit of dark chocolate for dessert… 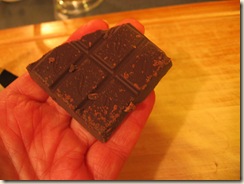 Off to watch the finale of Big Brother – if I can stay awake that long.

Posted by JavaChick at 9:50 PM

Taking it slow sounds like a REALLY good idea. You know your body best!