The Prince and the Pea

I washed the mats from the kitchen and bathroom, but I wanted to clean the floors before I put them back down so they are currently sitting folded up on a kitchen chair.

I came out this morning to this: 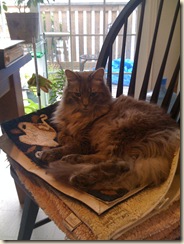 That’s my little Prince – never passes up an opportunity to recline on a well padded surface.

Started off the day with some Optimum Slim and Almond Breeze, topped by a sliced peach (it was a Nova Scotia Peach, for all you Eat Atlantic folk). 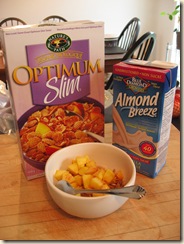 Then off to work we went. I was feeling a little cranky about it to be honest, wishing I had thought to book a vacation day. Weather-wise, we had such a crappy summer but the forecast for the weekend is really good. Plus I am so behind with stuff around the house – it would have been so nice to have an extra day.

But I didn’t, so there I was. I was actually really busy all day – too busy really. I have a list of things that need to be done, but higher priority things keep coming up, so I’m working steady but not feeling like I’m making a dent in my to-do list.

Next thing I knew it was lunch time. I honestly wasn’t sure what I felt like eating, but I finally decided to go for Lebanese. I don’t buy lunch often, and the one Lebanese restaurant Uptown is sort of off the beaten path – down a back street. Add to that the fact that they’ve been ripping up the streets all summer which made it even less convenient. It’s definitely been a while since I’ve been there – probably last fall.

I thought they must be done with most of the street work now…No such luck. 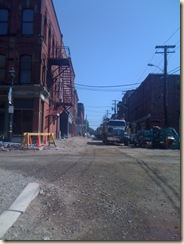 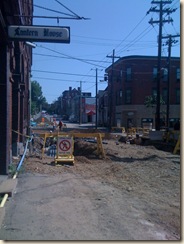 At least it was a beautiful day for a walk around town. 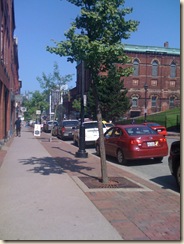 There was no one in the restaurant when I got there, which was probably somewhere close to 1 PM. I’m thinking that having the streets torn up around you all summer is not good for business. While I waited for my order I snapped a couple of pictures; it’s not a fancy place but I like the warm-toned murals painted on the walls. 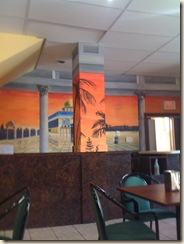 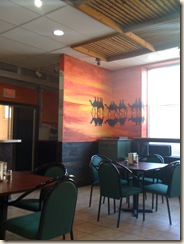 What I ate (sorry for the blurry photos): 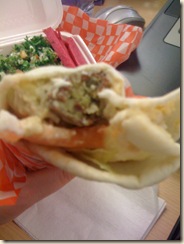 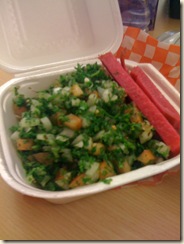 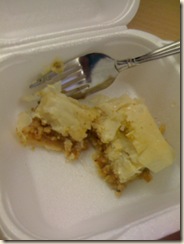 And a little piece of baklava, which the waitress persuaded me to try by saying “It’s goooooood.” Which it was – dripping with honey and chock full of nuts. Yum!

Lunch was good. I love a good Falafel. I cringe to tell you what I had for supper though.

I got home from work feeling tired and out of sorts – felt like a long day. Most days during the week I have a general meal plan, but I tend to leave Fridays open in case we want to go out or something. Tonight, neither one of us knew what we wanted to do. I didn’t really know what I wanted to eat. Husband was feeling the same way.

In retrospect, I should have suggested we wait a bit. I could have gone for a walk, or done my 3rd Boot Camp for the week (which would have been a really great idea, one less thing to worry about tomorrow), but Husband was in a “let’s decide and get it done” kind of mood.

It was a nice day – we’ve been wasting all this lovely barbeque weather – so Husband mentioned there was a steak in the freezer he could have. Which reminded me I still had a piece of Smoked Rainbow Trout in the freezer (the 2nd in the package I had tried out back on a perfect Friday in May). Only it should have been defrosted ahead of time.

I checked the package and it said I could defrost it in the microwave. It didn’t feel like it was really what I wanted – but I didn’t know what I wanted and it should be used up, so we decided to go ahead with the BBQ plan.

I threw my fish in the microwave to defrost. Husband pulled out his steak, which was one of those single-portion vacuum-sealed type things and he’d thought it could go right on the grill and cook from frozen…But no such luck. It needed to be defrosted. So he decided to put it in the fridge to defrost for tomorrow, and instead he would cook these frozen Chicken Taquitos we had.

So this is what I ended up with for supper: 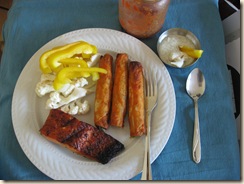 A portion of trout, which was slightly over cooked this time – maybe from defrosting in microwave? – 3 taquitos and a pile of raw cauliflower(from the farmer's market last weekend) and yellow bell pepper.

It all tasted good. But. I kinda felt like I was eating it because I had to, not because I really wanted it.

So then I broke down and had something that I actually did want: I never claimed to be sensible. (I haven’t have I? I think I’d remember something like that.)

I read my book and drank my coke, and began to unwind a bit. Then I saw Fred sitting there, patiently watching me. So I took him for a walk. 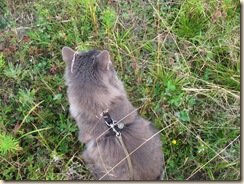 Walking a cat (at least with my cats) involves walking a bit, stopping to look around, walking a bit more, stopping to pounce on a grasshopper, walking a bit more…And they never actually want to turn around and walk home; they just want to wander along and explore. So when I decide it’s time to come back, I have to pick up my 17 lb cat and carry him home. Which is not too bad, except for the days he decides he really doesn’t want to go and he squirms around trying to get down.

Today he was good though, sitting up and looking over my shoulder. I tried to get a couple of photos, but it was kind of awkward to hold Fred with one arm and point the camera with the other. Still, I think a couple of them turned out pretty neat. 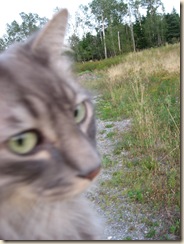 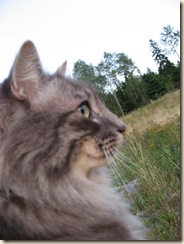 After we had our walk, I cleaned up the kitchen. Then I got in a short treadmill session – and felt better. Amazing what listening to some tunes and getting a bit of exercise can do for your mood.

In addition to the veggies I chopped for supper, I had made a batch of guacamole because there was a ripe avocado sitting there, waiting to be used (my fault for being to lazy to make salads the past couple of days). 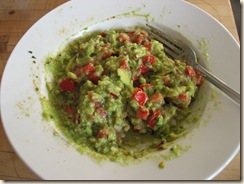 But, I felt like supper was enough, so I put it in the fridge.

Guacamole doesn’t really keep well though, so once I was ready to sit down and do my blogging for the day, I put some in a bowl for me and gave the rest to Husband. Not that I needed it, but oh well.

At first I was thinking today demonstrated another good reason why maybe I don’t want to be a food blogger. Sometimes I eat crappy meals. But, the fact that I had to blog about it made me think about it, so maybe that’s a good thing.

Now it’s getting to be way past my bedtime, so I’m about done for tonight. Just going to leave you with one last photo that I took on a whim – this is the screen of my laptop: 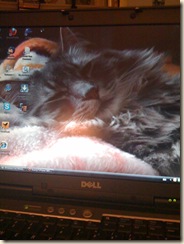 I take my baby to work with me every day. :)

Labels: Do I want to be a food blogger?

I love that you walk your cat!

I love that you walk your cat!

Awww so cute. He looks so majestic.

I think that's one of the fun things about food blogging- it shows that we don't all eat perfect 100% of the time, and that it's okay to enjoy things that aren't exactly "healthy".

My babies are on my screensaver too! I can walk BadCat - he is more dog then cat - but BadKitten just flattens out. She doesn't know what she is missing!

Dee - he pretty much insists on it.

Sagan - True, it's all about balance.

Missicat - when we first put harnesses on ours they did that, but they got over it because they wanted to go outside and at the time that was their only option.