Guess it’s time to get used to this. 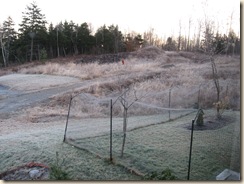 Oat Bran, prepared with half Almond Breeze and half water, topped with coconut butter & almond butter. A little glass of grapefruit juice on the side. 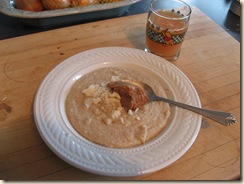 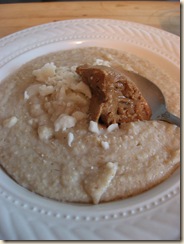 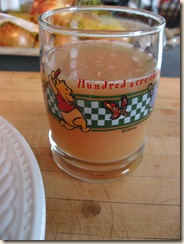 I ate half of the oat bran, then decided I was full. I packed the rest in a container to take to work in case I got hungry.

Turned out that I did not get hungry until lunch time. Then, I heated up my second-to-last container of Thai Green Curry Soup.

Which I forgot to take a picture of. 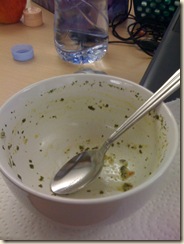 A Walk and Second Breakfast

The day started out chilly, but warmed up to around 8 degrees (according to the weather page) and there was no wind, so it was very pleasant when I went out for my afternoon break. I didn’t want to go back to the office. 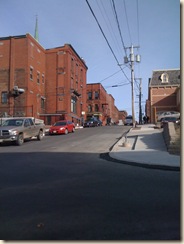 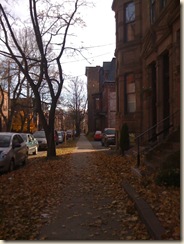 But I did go back to the office and decided it was time to eat my apple. 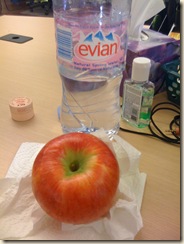 Then around 3:45 I started to feel hungry. At first I wasn’t going to bother to eat anything, but I still had the rest of my oat bran in the fridge and I planned on working out when I got home.

Second breakfast it was. 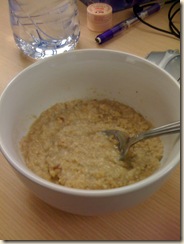 Finally got back to my workouts. Here it is November 12 and I’ve only done each of the November Circuit Workouts once. Today I did Workout A for the second time. I remembered it really kicking my butt the first time, and I only made it through 2 rounds of the ab circuit that first time because I was feeling so nauseous.

Today being the first workout after being sick for almost a week, I did drop the weight a bit for one of the exercises that I found really hard the last time. But, the whole workout went much better today – amazing what a difference it makes when  you don’t feel sick to your stomach! Now I’m wondering if I was starting to get sick when I did that first workout.

Anyway, felt great to get a workout in.

Then it was time for leftovers. I put the Chicken Chili on to reheat while I went and had a shower. Then dinner was really easy to throw together. 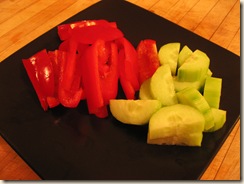 And the main – Chili over microwave reheated rice: 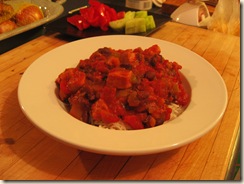 I gave Husband some dip to go with his veggies, but I decided I’d rather have cheese on my chili. 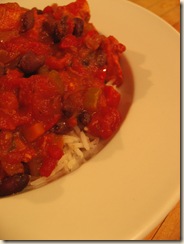 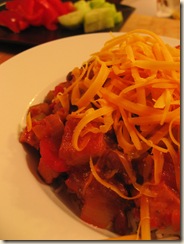 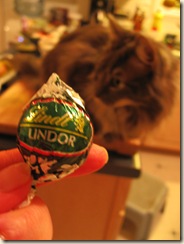 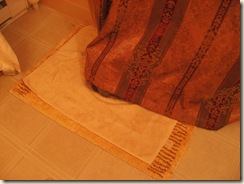 That would be Frank, snoozing under the shower curtain. See the paw sticking out? 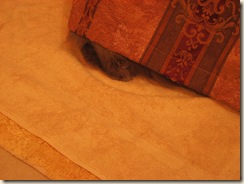 For some reason he likes to sleep under there. He crawled behind the curtain when I went to have a shower. He did magically reappear in time to mooch some of my chicken though.

Posted by JavaChick at 9:24 PM

Yes, winter is coming - we can't get away from it (well, okay, we COULD, but it would be expensive and involve traveling.....)

Love the pictures you post of your food - it always looks so appealing!

The cat sleeping under the shower curtain looks very cute. My cat is trying his damnedest to help me type this....

Cats find the funniest places to curl up! Mine does one place for a while, then moves on to another place. How cute ;-)