Not much exciting going on this weekend, so just a quick recap…

Oats for breakfast, with coconut butter, peanut butter and a little maple syrup. 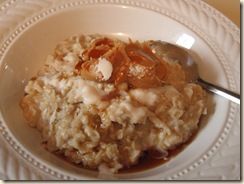 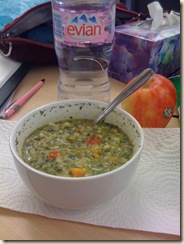 I’ll be making it again though, because it’s good stuff. Had the apple as a mid-afternoon snack.

We usually stop for takeout on Friday’s, but we decided to make pizza at home instead. We stopped at the grocery store to pick up a few things, and Husband suddenly started not feeling well. So when we got home he went to lay down. I did some kitchen cleanup (things got a little piled up with me being sick last week – Husband did make soup for me, but he doesn’t do dishes) and assembled the pizza.

I was going to put the pizza in the fridge and hit the treadmill while Husband was napping, but by the time I had the pizza put together he was up again and ready to eat. So, pizza instead of exercise. 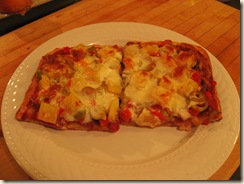 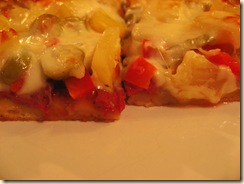 And I ended up polishing off this package of Lindor truffles that were a party favor at the baby shower I went to a couple weekends ago. Yes, they sat in the kitchen for 2 weeks before I ate them. Amazing. 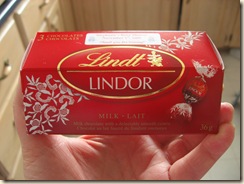 I was feeling a wee bit cranky because just as I thought I was getting over being sick, I got a stuffy head and I’ve been blowing my nose constantly for the past couple of days, decimating innocent Kleenex boxes all over the place. While I felt plenty miserable last weekend without adding extra symptoms, it would have been nice to get it all over at once.

I slept through from 11 pm to 9:30 am. The cats did wake me up around 6 am wanting out, so I opened the window and went back to bed. When I woke up again, both cats were in and sleeping with me (Zappa on top of me and Frank close by my side).

Breakfast an English Muffin with peanut butter and jam, and coffee. 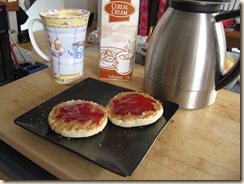 I spent a leisurely morning watching a bit of TV, thinking about meals for the week and writing up a grocery list.

Frank, of course, wanted a walk.

I, of course, obliged.

This is all I have for pictures because my camera started flashing the battery indicator at me. 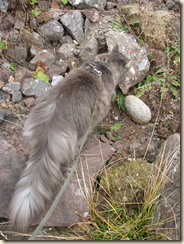 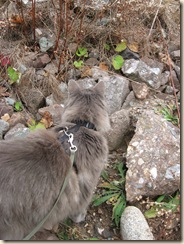 Frank and I had a good, long ramble though, and then I took Zappa out.

Then I came in and got organized to go grocery shopping. It was around 1 pm by then, but i wasn’t hungry. I did have a small glass of grapefruit juice, then I got going.

I had to make a few stops today, and by the time I finished the grocery shopping it was around 3:30 and I was hungry. I loaded the groceries into the trunk, and pulled this out of the bags: 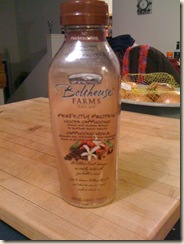 All photos from here on are iPhone pics.

I drank half of it sitting in the parking lot, then finished it when I got home. Once the groceries were put away (with help from Husband) I changed into workout gear and hit the treadmill for intervals.

Then we made supper. I knew I would want something quick & easy by the time I got finished with shopping and exercising, so I picked up a bottle of President’s Choice Madras Curry sauce and some Garlic Naan. 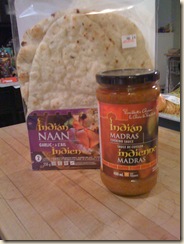 Most of the time I am a bit of a snob about bottled sauces – homemade is always better! But sometimes convenience wins out and this stuff is actually pretty good (or at least I like it).

The sauce went into the pan with chicken breasts, cauliflower and red bell pepper. 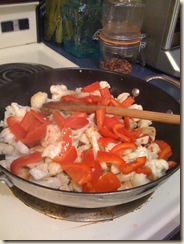 I also added some extra chilies. 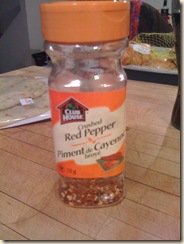 The label on the curry jar might say hot, but for Husband and I it needs some extra kick.

Husband decided it was a rum & coke night as well. Haven’t had one in ages and I have to say it went down pretty good. 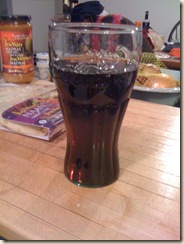 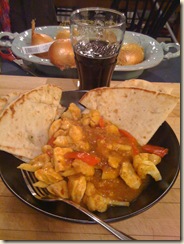 So that was dinner and I am feeling quite contented.

Tomorrow the plan is a batch of soup to go into the freezer for work lunches, and a new slow cooker recipe to try out for supper. And house cleaning. And laundry. And a workout. You know, the usual weekend “relaxation.”

Edit: Wow. Just noticed the temperature is still 10 degrees Celsius. It's only supposed to go down to 9 degrees tonight and tomorrow it's supposed to be 16 degrees! Ok, so not exactly tropical, but at this time of year it could be much worse. I love it!

Posted by JavaChick at 8:29 PM

Haha those chocolates would've last a day or 2 at most in my cupboards. *drool* love me some good quality chocolate.

I really like the PC Indian foods too, they are pretty tasty for being boxed/bottled.

Ooh, will have to check out that Indian food, b/c I've been looking for a store brand that isn't too nasty tasting to try.

And I'm amazed you lasted so long on the chocolate!

wow I do need an iphone huh? those pics are amazing!

Lynn - Yes, I was pleasantly surprised by the PC Indian products. Their naan is really good.

Crabby - I like the Madras the best - it's pretty good stuff. Also very easy. :)

Miz - I love my iPhone! And I say this as an avowed phone-phobic.

Merry - For the time of year, it's been downright warm. I'm going to soak it up for as long as I can.

Tranierpak - Thanks! He is a beautiful cat if I do say so myself.